Neon Abyss is a frantic, roguelite action-platformer where you run ‘n’ gun your way into the Abyss. Featuring unlimited item synergies and a unique dungeon evolution system, each run diversifies the experience and every choice alters the ruleset.
-50%
$19.99
$9.99
Visit the Store Page
Most popular community and official content for the past week.  (?)
Watch us play Neon Abyss on Twitch!
Jun 27 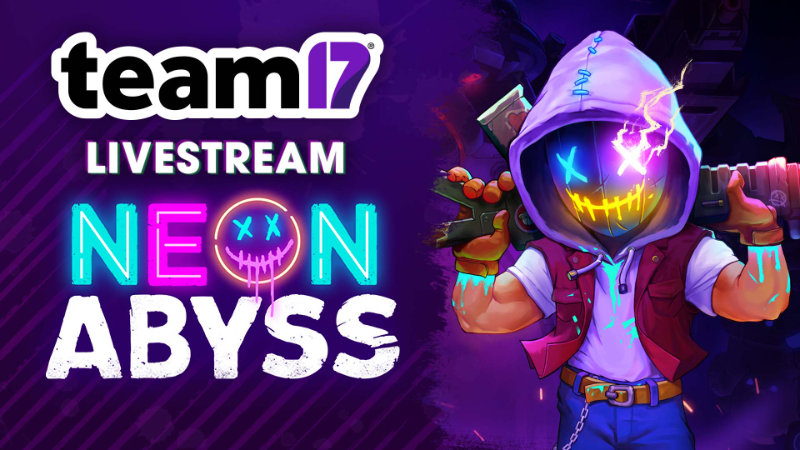 We're streaming Neon Abyss over on our Twitch channel on July 6th! ✨

Watch us run'n'gun our way into the Abyss, and try to survive for as long as possible... 🏃 💨

Neon Abyss
65
1
Game breaking bug
Pressing at the start of the game will freeze the player in place, making the run useless.
15

Neon Abyss Weapon Compendium
This guide is the follow-up on my Item Compendium. Contains all obtainable weapons.
152 ratings

Cryfor
View all guides
Save 50% OFF Neon Abyss!
Jun 23 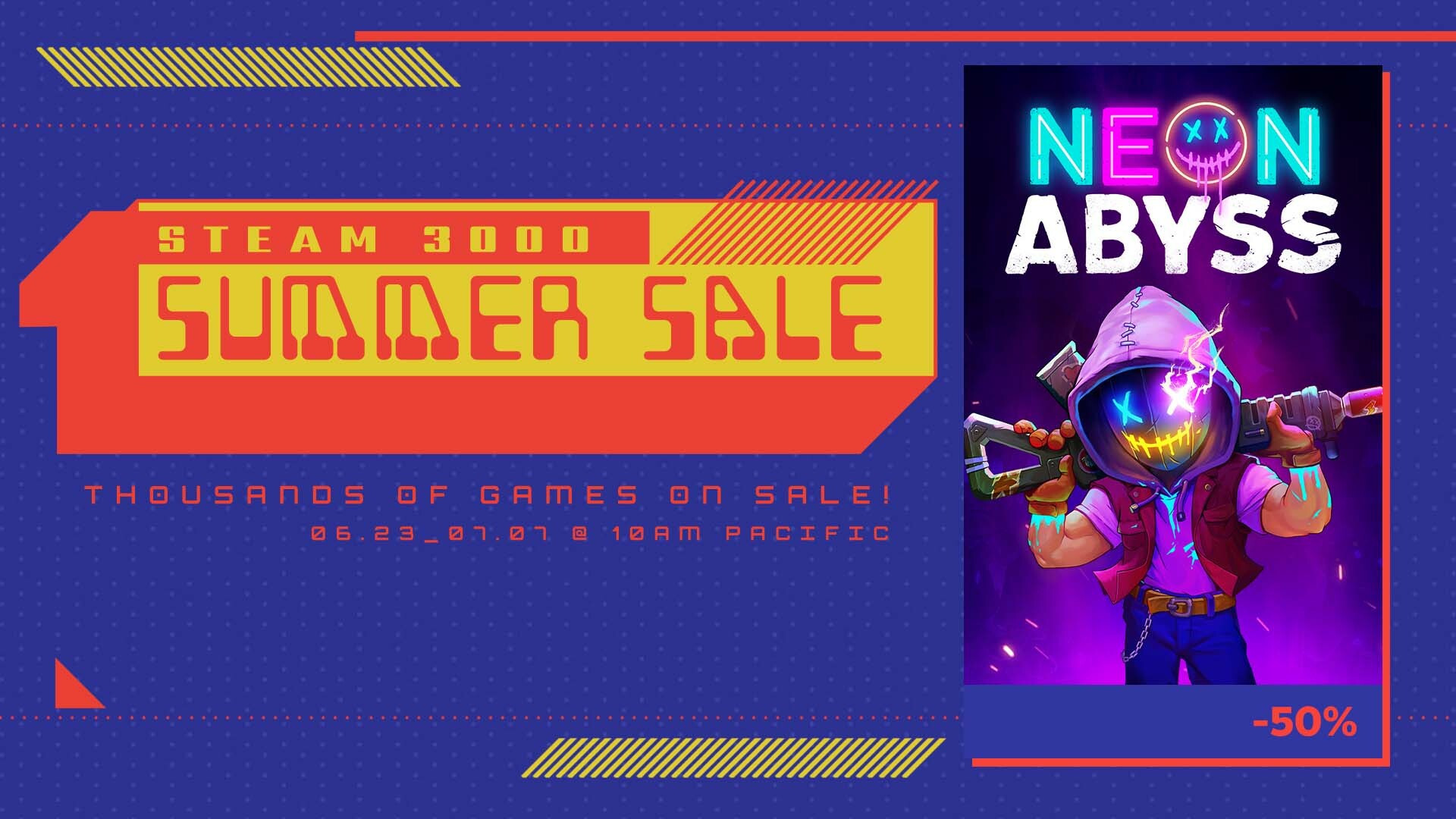 Are you a fan of roguelikes but haven't picked up Neon Abyss yet?
Catch 50% OFF during the Team17 Summer Sale!
https://store.steampowered.com/app/788100/Neon_Abyss/

If this doesn't take your fancy (or you already own Neon Abyss!), you can catch up to 90% OFF other Team17 titles during the sale! Be quick, this offer ends July 7th.

Achievement Guide
A list of the achievements and how to obtain them. Good luck and have fun! *If you have any tips or want some information updated / changed in the guide, feel free to comment!
70 ratings 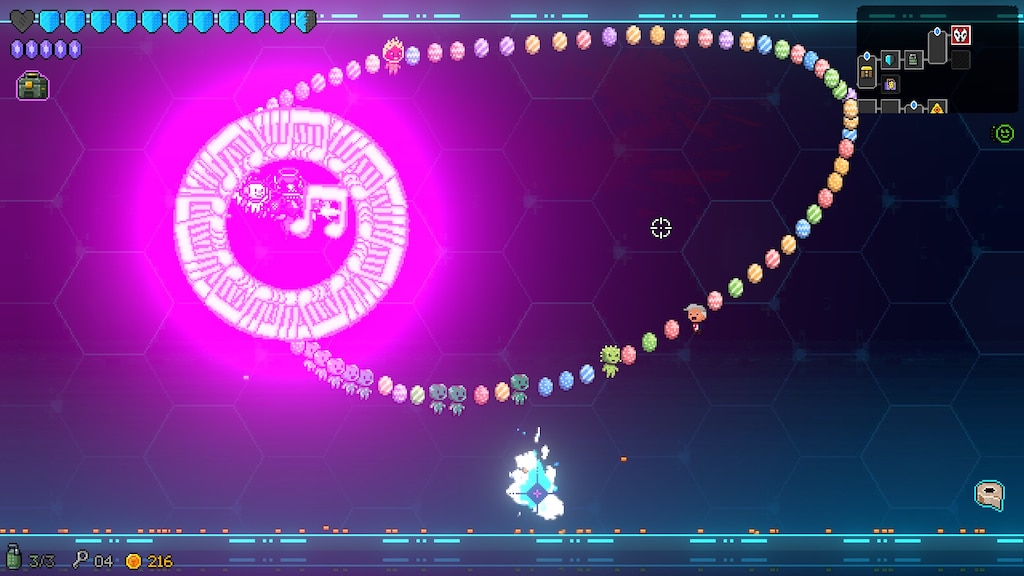 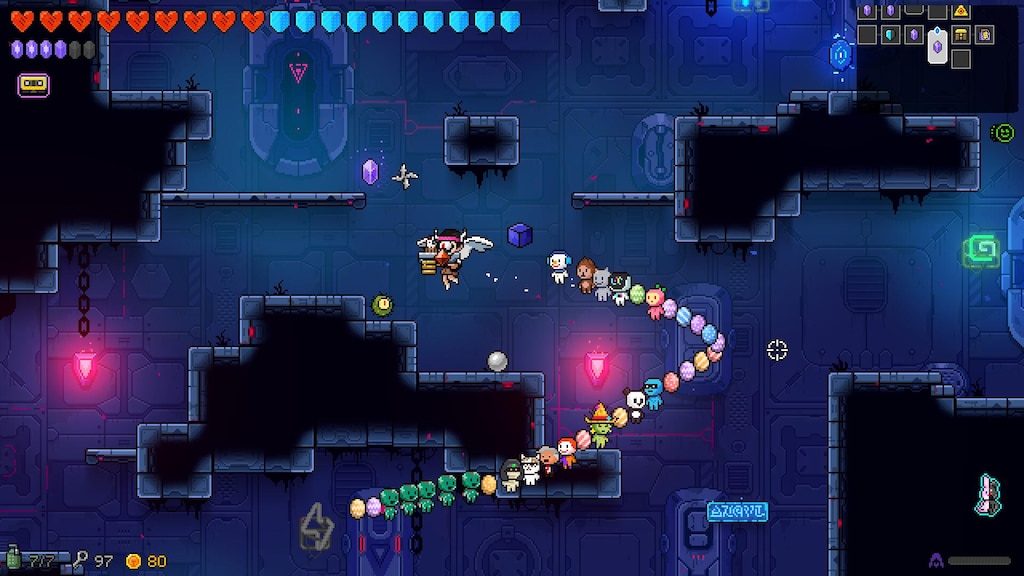 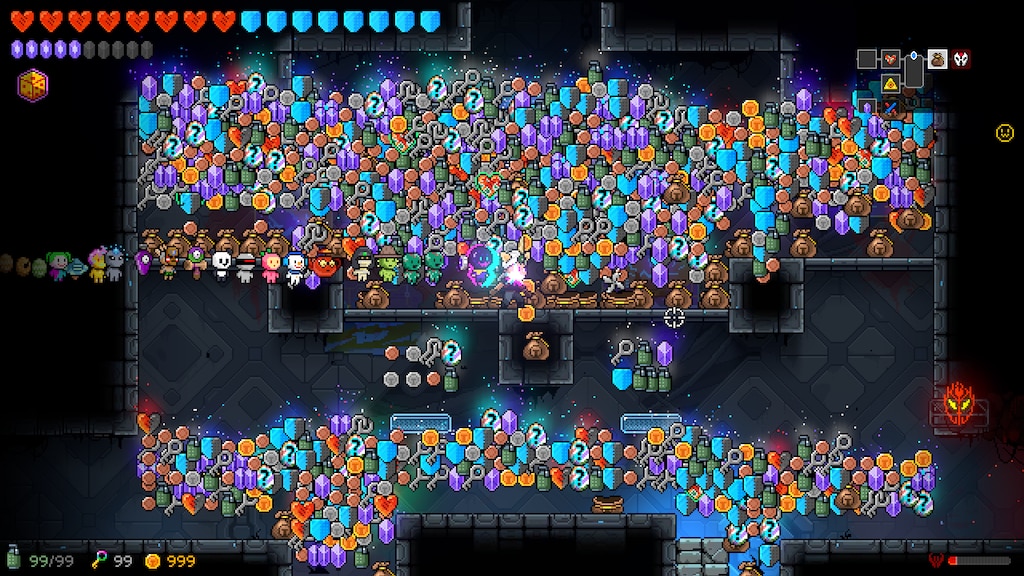 Not Recommended
2.2 hrs on record
Not a bad game but not for me. The problem is the game starts to feel like I'm playing the same room over and over and over, with little feeling of progression and accomplishment. You get a lot of crap loot. Theres upgrades that don't show what they are or how they work only until after you pick it up. You also need to spend coins to enter a shop, but can't afford anything because the coins are so few and far between. The skill tree to give permanent upgrades are terrible (on the first page at least), and the extra character just has a dodge roll but nothing else. You can reset the skill tree but it costs 20 gems which means you'll have to grind bosses 4 or 5 times- just to reset your skill tree. Certain walls require a grenade to go through so I found myself not using them against enemies at all, not to mention your own grenades hurt you.

1
2
YOUR OWN BULLETS ARE YOUR WORST ENEMY CAW CAW 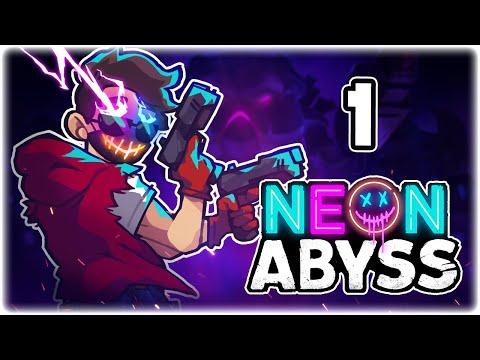 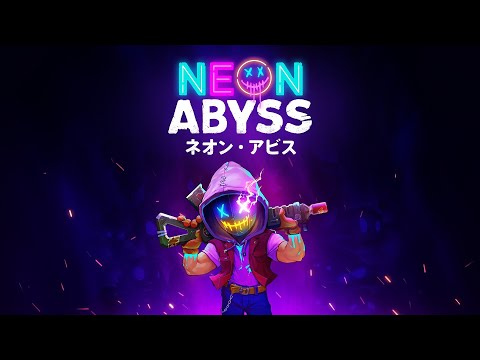 Not Recommended
13.3 hrs on record
There's a lot to like about this game. The style is great. Tons of replayability. Lots of weapons and characters and things to unlock. It's really the kind of game I enjoy, yet I'm finding myself enjoying less than half the runs I'm on. That's concerning.

It's unfair, a lot. Moreso than the usual roguelite. Compare it to games like Enter the Gungeon, Binding of Issac, Rogue Legacy, those games really leave it up to you to make mistakes. Neon Abyss will just slap you out of nowhere or stack mechanics on mechanics to force you to take hits. I've got the 100% achievement in TBOI, playing hard games isn't a big deal. Playing unfair games on the other hand just feels worse when you know you're getting better and don't have a choice but to lose because the game puts you in impossible situations.

Currently at 12 hours with most of the mainline unlocks, and beat most of the standard bosses, but those wins came from being lucky, not good. You will eventually get some overpowered combinations of items that will carry you through the bosses. This game will also shut down a run whether you like it or not. There's only so much skill and practice can overcome. Here's a couple examples.

Enemies will teleport on top of you with a pretty minor telegraph that appears behind you, and they'll spawn in on the other side of a room that you can't see when you initially enter. If you have any amount of busy bullet effects, it's almost impossible to see before taking a hit.

Enemies will inconsistently fire through walls, and again, will fire at you off-screen before you know they exist. There's a little more time to react, but not much, and when you're not expecting it while dealing with the first half of the room, getting hit is not unusual.

Large rooms will occasionally will have enemies that pop up on the wall, fire, and then burrow back into the wall again. Frequently you will not be able to track them down and fire back within range before they dig away again. Combine this with any room that has a laser trap to take damage either while dodging the laser and getting popped up on, or trying to chase down the enemy and catching a laser from bad positioning.

Almost every boss will ignore damage and still be allowed to throw attacks at you. It's annoying and unfair design because ~nuuuu you're not allowed to beat my cool boss without seeing all his attacks nuuuu~ reasoning I assume. If players get lucky and end up with a good combination of weapons and items, just let them roll over the boss. Making your boss cheese through fights without taking damage is unfair.

Looting the boss leaves you trying to catch a quickly flickering upgrade with no rhyme or reason what it will end up on. It rotates between a health container, attack speed upgrade, and damage upgrade. Naturally if you're already good on health you want the damage or attack speed (which both cap so you might want one specifically) but the random roll means 66% of the time you're not getting what you thought you selected.

Also, why is it in the background when the room is clear? Put the items in the foreground if the room is clear. There's no reason I have to try and manuevuer my conga line of followers around to try and see what's going on aside from being annoying making the player feel like they messed up trying to select the buff they actually want.

The egg system... You pickup eggs and followers hatch, sometimes. Or you get a nothing. The followers are entirely random, and about 60% of them are useful. 10% are useless, and 30% are actively trying to screw you by stealing money, health, turning health into risky health, dropping bombs on environmental explosives, etc. Keep the hatch/fail mechanic, but make them an optional pickup with the name of the follower so the player can elect to pass if the mechanic doesn't fit the current run.

To be fair to Neon Abyss, they've made some changes since early access. You can technically blacklist the items, weapons, enemies, and followers if they annoy you in particular, which I've tried my best to cut out the most egregious offenders. However it's pretty strictly limited to a very small proportion of the overall sheer amount to pick from it's really an illusion of choice to try and mitigate the annoyances. This, in and of itself, is an annoyance. Giving just enough to call it a feature while still inevitably being unable to effectively make the game fair to play.

Anyway, I want to like the game more than I do. I wouldn't recommend it to most people, only if you're really into having a game beat you rather than beating the game. I'll probably keep playing it anyway. 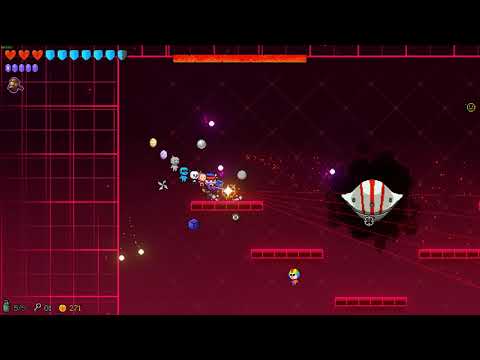 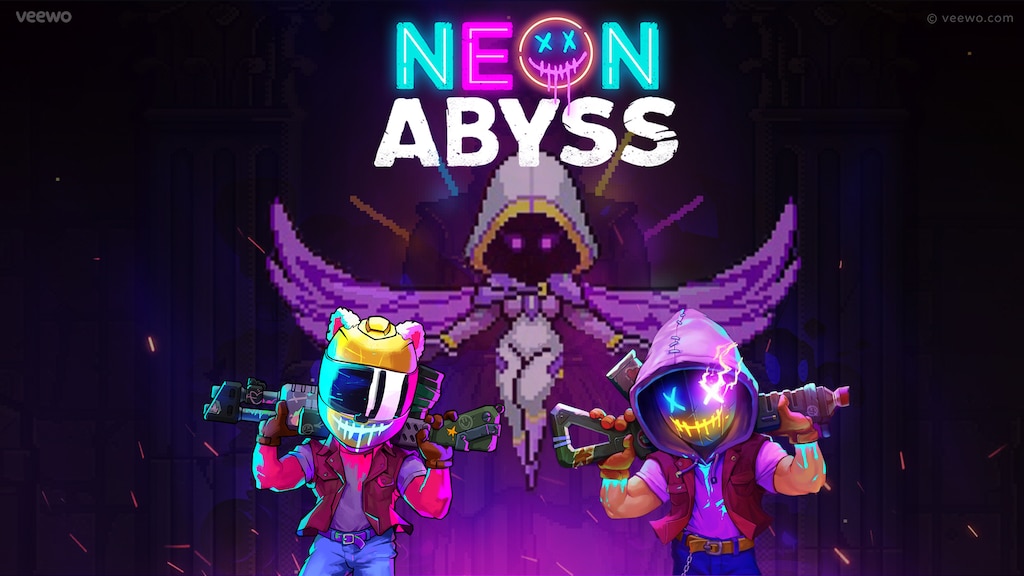 Recommended
47.7 hrs on record
really really fun indie game, would recommend to everyone 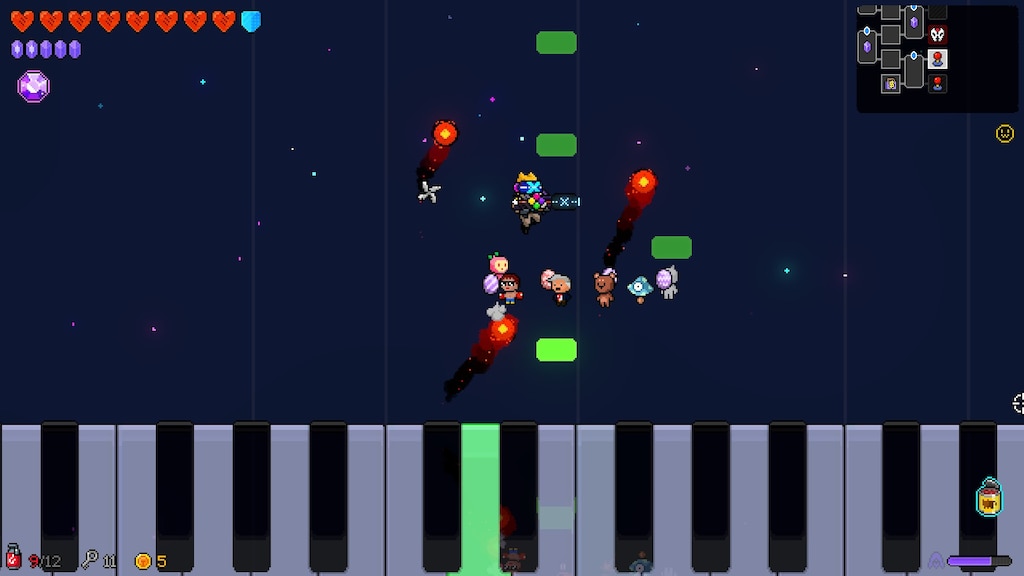 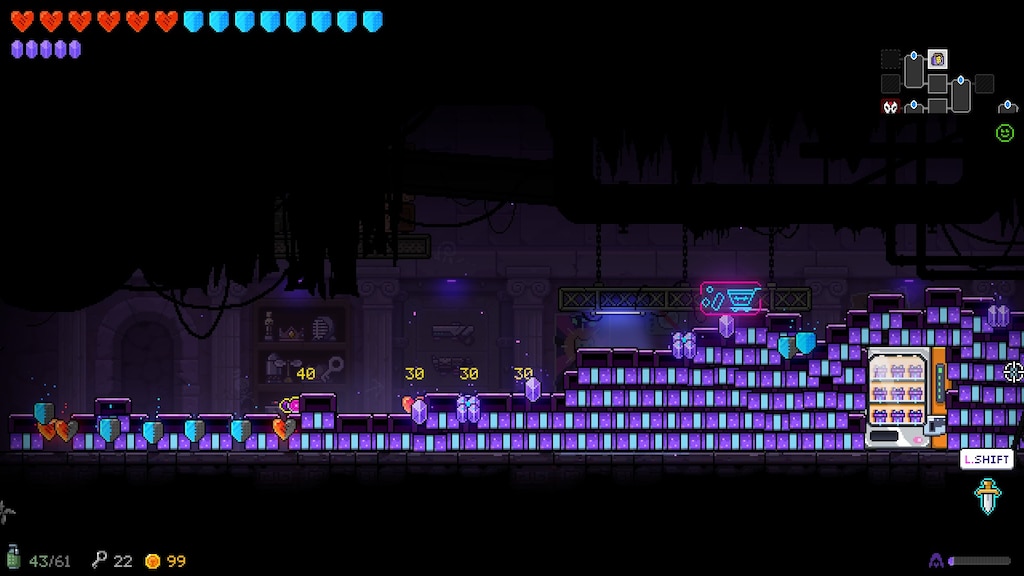 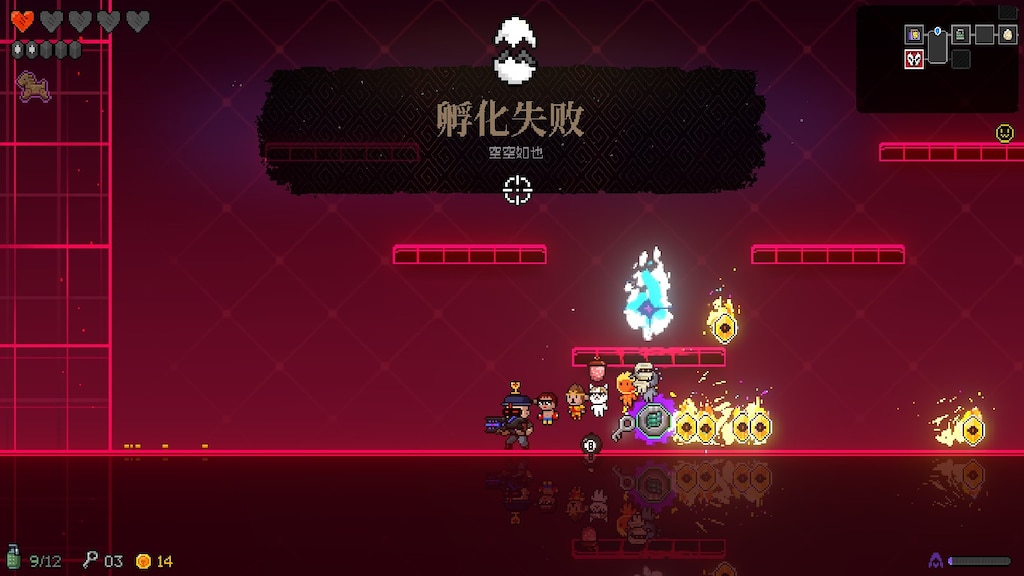 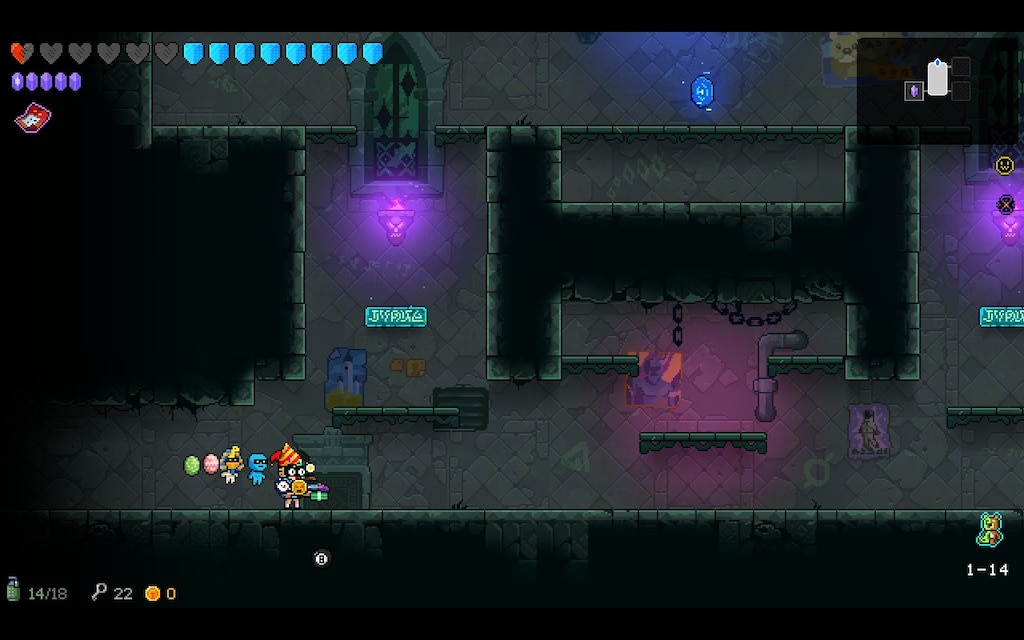 Heath.Chaneky
View screenshots
So how do I get the chronos thingy unlocked?
I don't get the achievement, or stamp, by defeating chronos on lvl 1-20 (or so). I dont get it by defeating the boss on 4-10 (which wasn't chronos but prometheus). How the actual actual do I do it? :P
26

Grubberdeck
Jun 4 @ 4:09pm
General Discussions
Unable to access Consol
Hey. So i have an Nordic keyboard and our ~ key is hidden behind using alt gr which seems to prevented me from accessing the consol in the game. I just wish that we could get the option to rebind the consol key to avoid similar problems regardless of keyboard layout :)...
1

wolf.of.the.7.seas
Jul 4 @ 2:42am
Report a Problem
Game bug (no open doors)
Playing on the 6th floor, I almost destroyed all the enemies in the room, except for the last one and my character was killed, but I had an item that gives a chance to be reborn after death. After the revival, I again got into this room, in which this one enemy remained, I killed him, but the doors did not open and I remained locked up. Fix this issue....
1

Я ЗАГОГУЛЬКА
Jul 4 @ 2:27am
Report a Problem
Constant Stuttering
I have this game on Epic, Steam, and Xbox, but steam is the only platform where i'm just stuttering constantly. its not even a lot of things on screen either, it starts as soon as i open the game.
8