Survive your evolution in Neogene Africa starting 10 million years ago. Ancestors: The Humankind Odyssey is a third-person open world survival game where you Explore, Expand, and Evolve to advance your clan to the next generation in the exciting new adventure from Panache Digital Games.
$39.99
Visit the Store Page
Most popular community and official content for the past week.  (?)
i don't believe were from apes
but i really enjoy the game
380 My name is you.
View screenshots
25 people found this review helpful

Not Recommended
124.2 hrs on record
First things first: Ancestors: The Humankind Odyssey is a survival game. A very well-made survival game, which feels top-notch by many dignities both in that specific genre and in the overall gaming experience plane. If you're a fan of survival games in general, if you're a letsplayer with some fanbase of individuals who would rather watch other people playing than do it themselves, well... Don't read my review, don't try to learn anything about this game before starting it. Just get it and dive into it. And make sure that you run it on the maximum visual settings available for your rig because it is really beautiful.

However, I am one of those players who felt a big disappointment while playing and finishing this game. So yeah, please, Do learn a bit about that Ancestors project before you start it.

The first sights are very, Very generous. We have a big seamless open world to wander about, with many different biomes, full of primeval lifeforms. We have hundreds, maybe thousands of various items to interact with, scattered around the whole map, and the thing that amazed me most? The game remembers each item you deal with. If you've dropped some stick somewhere, be sure that you'll find it even if you run around the whole map after that, and change the generation (meaning, 15 years of the game time will pass by). Even if it's not always that much realistic, it is still gross. AND this is an important piece of knowledge about Ancestors, because every time you reload your game, it replenishes all basic items in their places PLUS adds everything you merged and stored somewhere. So, one of the first things that you really should know about this game is that you can do a stack overflow error in it if you will try to store around any items besides those that you really need at the given moment. Also, don't try to build much, especially walls, because they are useless. The game can spawn a tiger right on our back, and no wall can hold it. The only thing you need walls there - is to build it 5 times to get an in-game progress achievement. Sadly, this pattern goes much wider in the game than just walls. In the end, the timings in the game are like - first 1-2 hours of wandering around and learning the ropes, then several more hours to really dive in the game, explore the map, see all the biomes and lifeforms in it, interact with all items and their possibilities. Then you change the generation - it's the basic game mechanic needed to evolve your creature into something more universal and capable. In theory. And wow! You need to develop your next generation right from the start! Not from the point where you left your progress, no - right from the same basic interactions with everything around. This might be normal from the scientific point of view - but not from the point of gameplay interest. Because it takes dozens of hours of doing Exactly the Same routine things, to make some development on the long scale.

You see, Ancestors: The Humankind Odyssey is built around the idea of changing generations, where every next generation is more capable than the previous one. But! There is a very limited amount of such capabilities. In the end, the game feels like a big timesink, where you do all the same things over and over and over, without actually progressing anyhow. Even worse, sometimes you might occasionally learn something that good (like the ability to constantly walk on two legs) that you'll not be able to repeat in several (many) next generations. The longer you play, the more so-called "game progress" seems to be quite real (non-game) regression. You literally waste too much time there. 15 times to hit a stick to sharpen it, and it breaks even faster than those one-time "shivs" in the Mad Max game. And you need Many of those sticks. Sure, with some progress, you'll be making this tool with only 5 hits instead of 15, but it's still too boring to perform it that often. And the itch that really kills me? The "development tree". To re-enable already learned skill, after you change the generation, you need to gather "neural energy", perform even more of the same routine actions like more swimming, more walking on 2 legs, more smelling and listening around, and after that - go to the progress screen and WAIT with your finger on the button while some imaginary line "fills" the "neuronet". I mean it's OK for the first time - but you have to do it over and over again!

So, to be fair, I have to note that aesthetically Ancestors: The Humankind Odyssey is one of the best immersion-type games on the market. And this is probably the best visual experience about the primeval world, not only in the videogames world, but also around non-scientific books like those from J.-H. Rosny aîné, or movies like "Ao, le dernier Néandertal"... I might be imagining things, but it seems that some French people are really into that era more than most others around the globe, by the way.

Ancestors have nice visuals, an interesting and quite appropriate soundtrack, and even the gameplay basics, with all that minimalistic user interface where the game expects players to understand what's going on without any HUD or other crutches. Sure, if you would play Ancestors only to see four-tusk primeval elephants, and try to play a cat-and-mouse game with the saber-toothed tiger - it's a very worthy pick. The best in the world.

However, as a complete game, Ancestors: The Humankind Odyssey sucks greatly. The grinding part is way too cumbersome, the amount of different events and scenes is too small, and it really hurts to do everything, especially watching the neurons "growing" in the development screen. It would really help the game experience, if the developers were aimed to make more seamlessness in the game progress, as much as they added it to their open world. Instead, they deliberately made too many things to prolong the gameplay time, by all the wrong means, such as those one-time spears that you need to make over, and over, and over again. Because there is a tiger that will spawn on your back every second when you're not on the tree. Oh, and if you're on the tree, it will be a giant eagle instead.

My mark is 6/10. A very beautiful immersion experience, if you taste games only by a short sip, and dreadful time sink, if you really want to see it through. 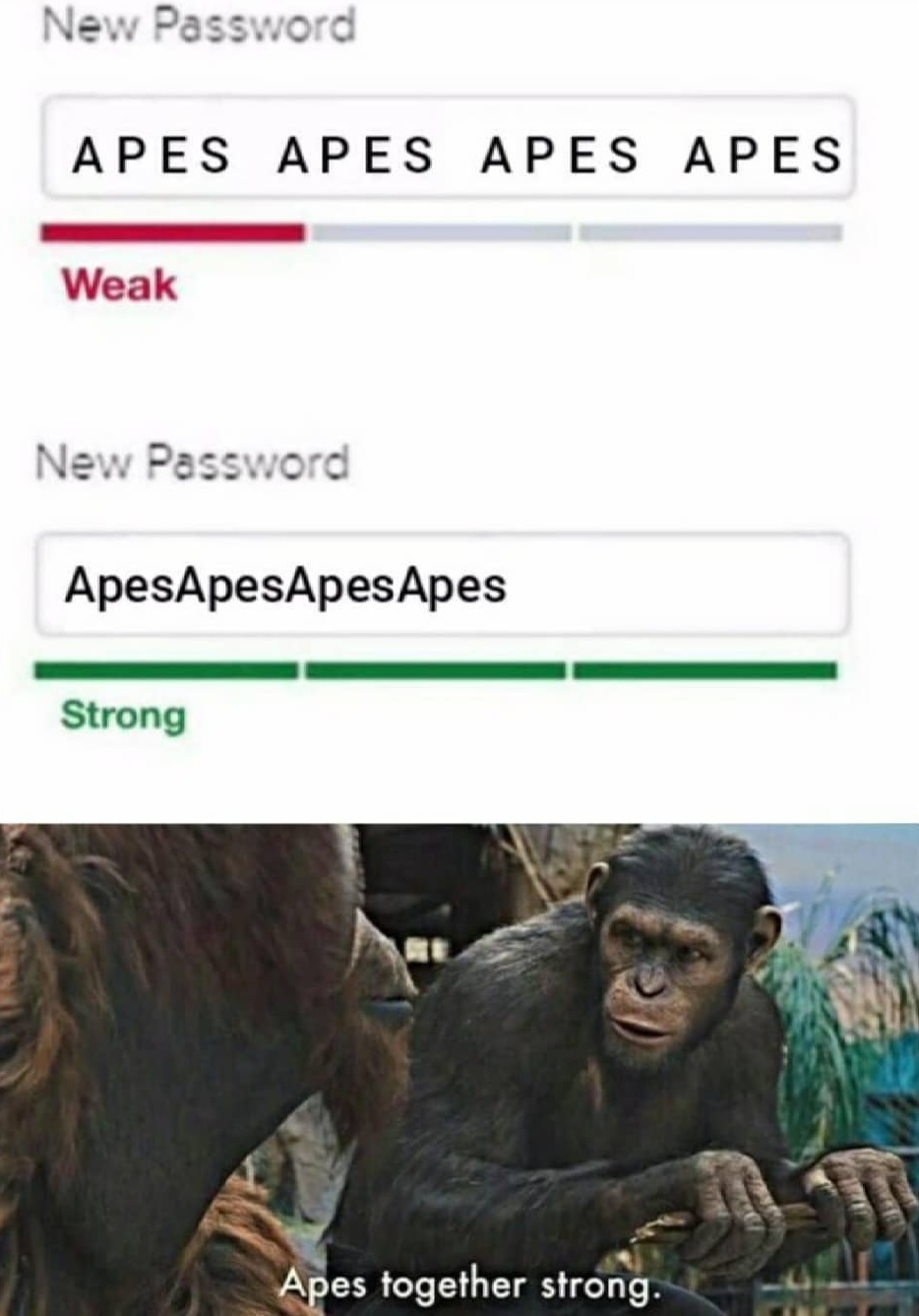 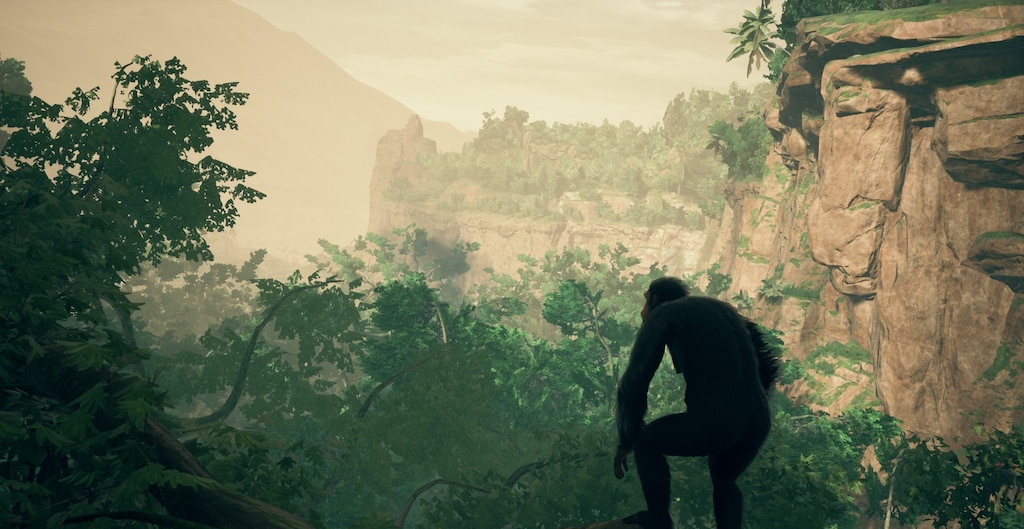 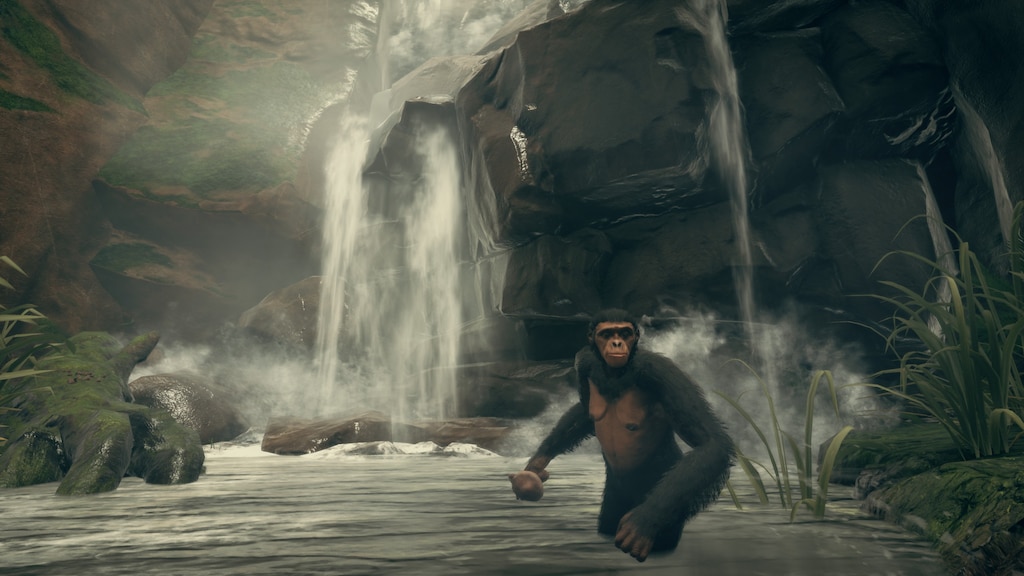 If It Doesn't Have A Tail It's Not A Monkey It's An Ape
This is just a compilation of what I was able to figure out in the game for people who have trouble with the clunky PC controls and were left utterly lost and hopeless after the brief tutorial. P.S. all the spoilers in this guide are tagged so no need ...
57 ratings

How not to get your monkey obliterated
Are you tired of getting utterly destroyed by the fauna of Ancestors: The Humankind Odyssey? well from what i've experienced, there are 3 main ways to make sure your precious precursor avoids becoming the wildlife's next lunch.
34 ratings 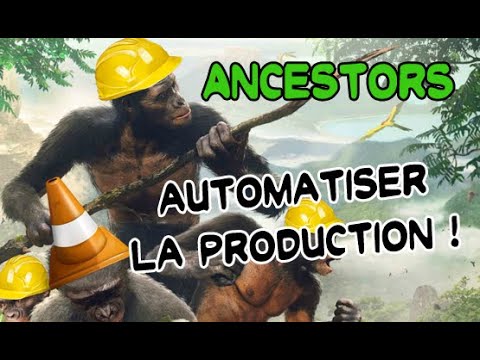 Not Recommended
76.8 hrs on record
Where to start...

I passed the game with my first lineage. went very slowly and learned all there is to learn close by before going into the next area and kept to the starting 2 areas for a while.

The game is a grind. Is it fun? Yes, maybe the first say... 25-30 hours, your milage may vary on this. Discovering how everything works by yourself is very fun although there aren't as many interactions as you'd hope.

The last 10-15 hours were a bad grind, and I just became victim of a sunken cost fallacy. I had already spent a lot of time so I was going to see it to the end.

The game is interesting and yes, it was very nice ideas but unless you're ready for a long grind with the danger of losing *EVERYTHING* if all your ancestors die. Well I can't recommend this game. 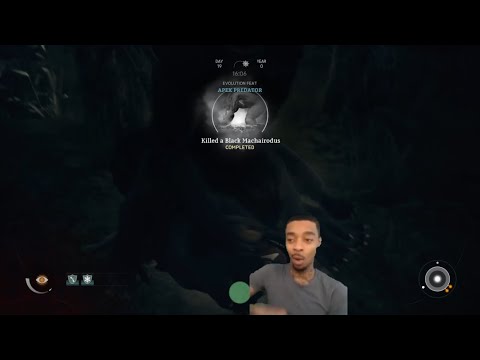 0
2
That one Machairodus kill scene

Soti's Advanced Movement Guide
Hop on my back, little monke, and I'll show you how to navigate the jungle without going splat! 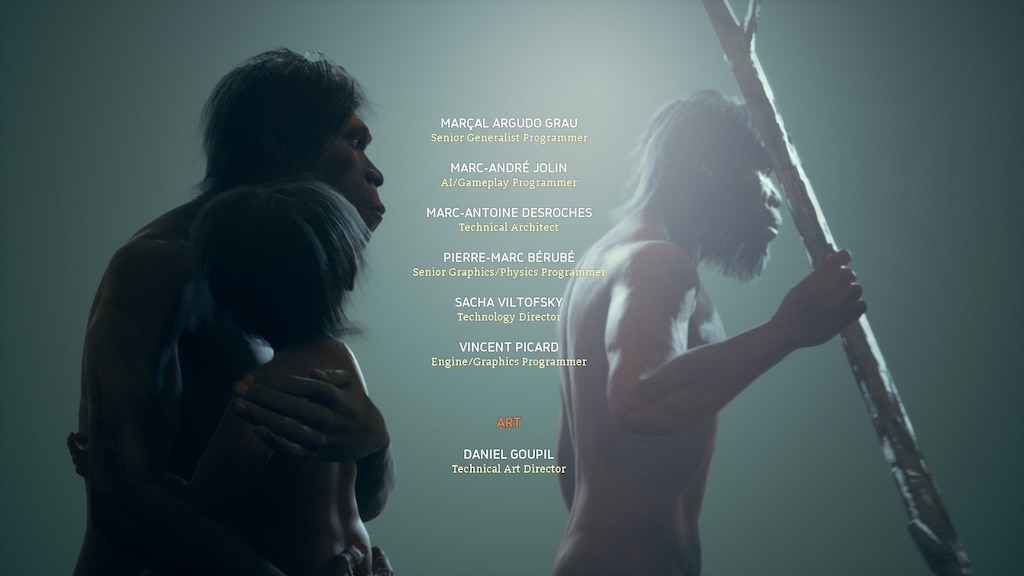 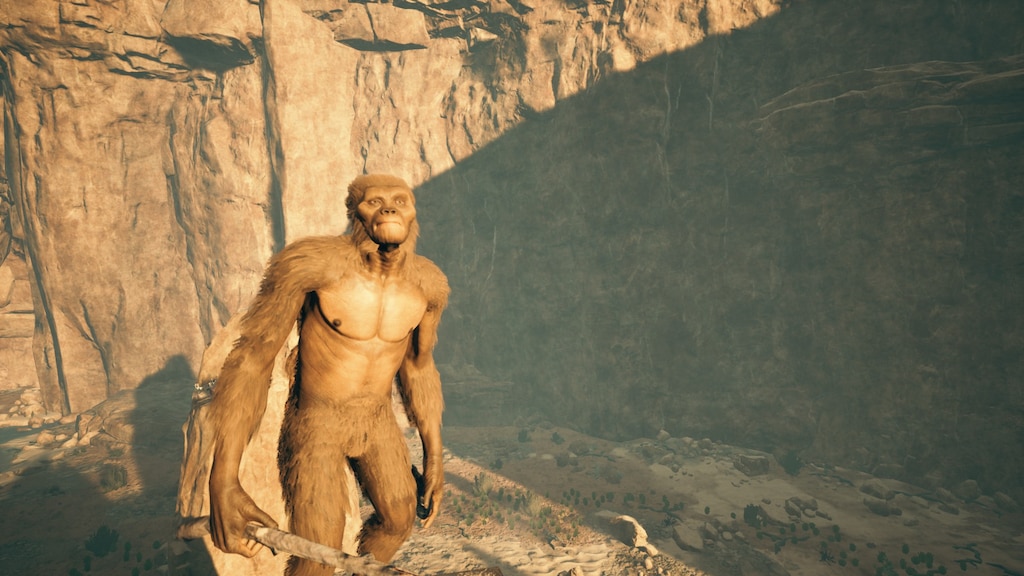 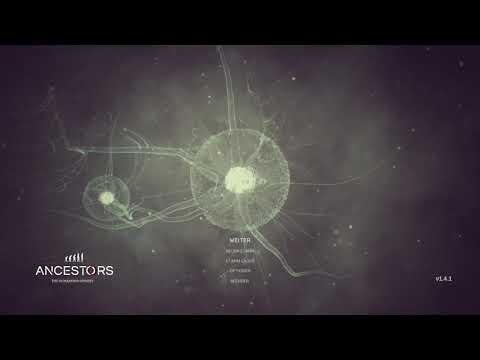 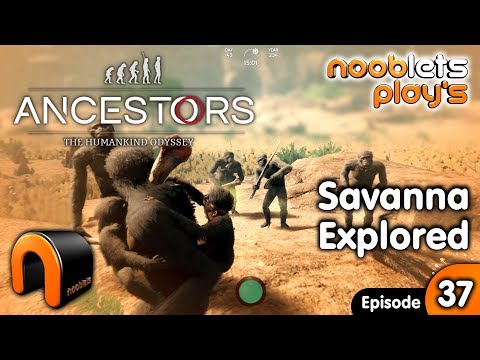 Nooblets
View videos
How to climb down without jumping?
So far I've lost 4 hominids to this issue and its starting to get frustrating. I play with M/K and can't for the life of me figure out how to get down from a tall place without jumping. I've seen exactly one YT video suggesting the use of the 'C' key (i.e. drop item) key to safely lower yourself down, but this hasn't worked for me even once and I've dropped more items than I care to admit trying to get it to work. Instead I'm usually stuck at the top of a tree and need to blind jump through leaves to try t...
15

Excessive Paranoia
Feb 23 @ 5:19pm
General Discussions
Can we get a disable option for the tiger please?
I really enjoyed the game, untill I figured out the tiger spawning mechanic, ruins the immersion to the point that I can't even find it in me to start the game anymore. All the predators in the game are fine, but the damn spawning tigers. A limitless supply of tigers all going 100% for you, ignoring everything else, the second you touch the ground. Good idea to get the "never feel safe" feeling, very poor execution. I've even seen the thing spawn inside a wall.. several times.. Just a small edit: I'm not...
27

Goat McSwag
Feb 12 @ 2:45am
General Discussions
When to jump generations and evolutions?
Been playing the game for only a few hours. Currently have the maximum amount of children, thus can lock in the max number of abilities for the next generation. Beyond that, what else should I do before jumping a generation? Should I always be moving to a new place to live? Secure new food sources? What do y'all recommend? Same question in regards to evolution: when should I do this, with what should be done/accomplished beforehand?...
5