The Turing Test is a challenging first-person puzzle game set on Jupiter’s moon, Europa. You are Ava Turing, an engineer for the International Space Agency (ISA) sent to discover the cause behind the disappearance of the ground crew stationed there.
$19.99
Visit the Store Page
Most popular community and official content for the past week.  (?)
*spoilers* Endgame discussion and alternate endings?
Just finished this game. It was very good IMO. I was able to gain access to all the Restricted rooms and the captains room on the space station. But I need help understanding a few things. 1. Why is the Cyrogenic awakening dates in the future for the gr...
177

The Turing Test • Walkthrough
• Welcome to my Walkthrough to the game: The Turing Test • I didn't realy found a walkthrough for this game here on steam. So i thought i create one for the community :) • I created a video for every chapter to get it more clearly • I also wrote down th
211 ratings

Optional Puzzles 1 - 7 PICTURE GUIDE (WIP)
I got tired of trying to navigate through all the various playthroughs , none of which had the Sector locations within each chapter. So here you are...a picture guide WITH SECTORS on how to obtain all 7 of the Optional Achievements.
104 ratings 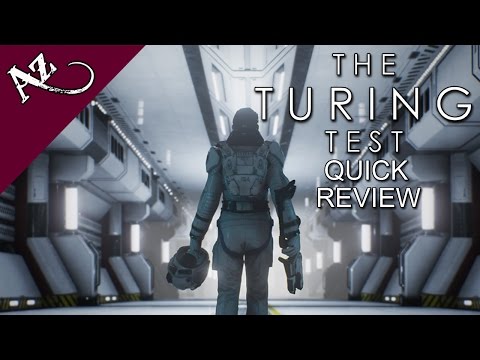 Audio Logs Transcriptions
An attempt to write down transcriptions for all audio logs.
60 ratings

0
2
Flying with Shovels in The Turing Test

threedotonefour
View all guides
So, who else...? *SPOILERS*
I know there's already a pinned thread about the ending, but I want to ask about something specific, and not just what you thought of the ending in general. About the final decision. As far as I could see, most of the crew didn't seem to think an immortality virus could be a problem, so most of TOM's concerns went unanswered. I thought maybe one of the texts or recordings would address it, but they didn't. I thought one of the side areas would address it, but they didn't. I thought they would say somethin...
35 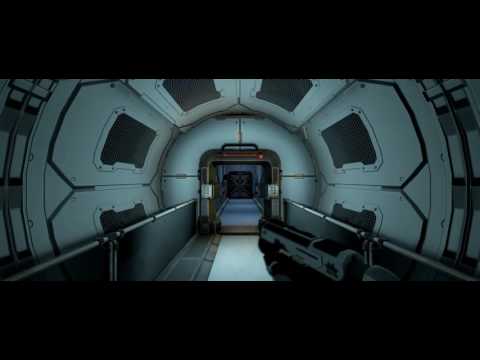 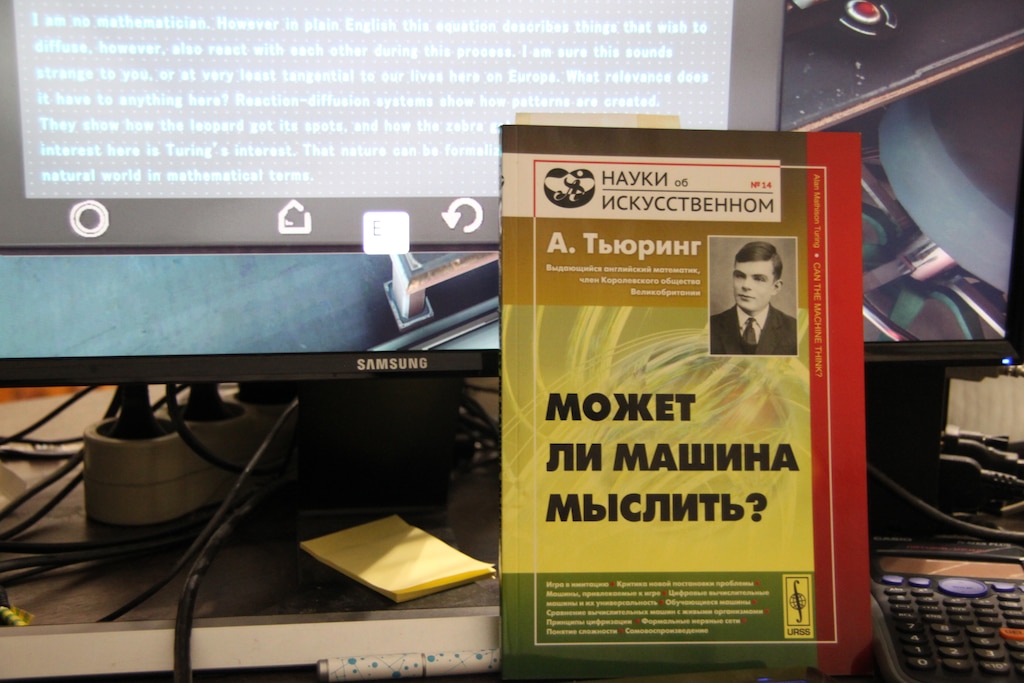 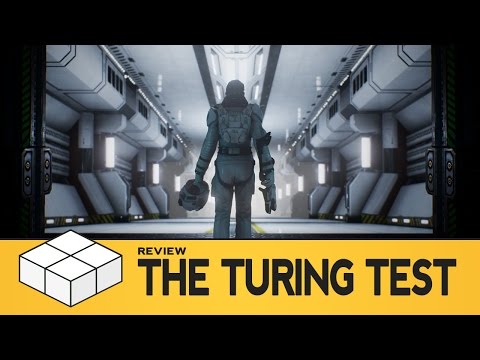 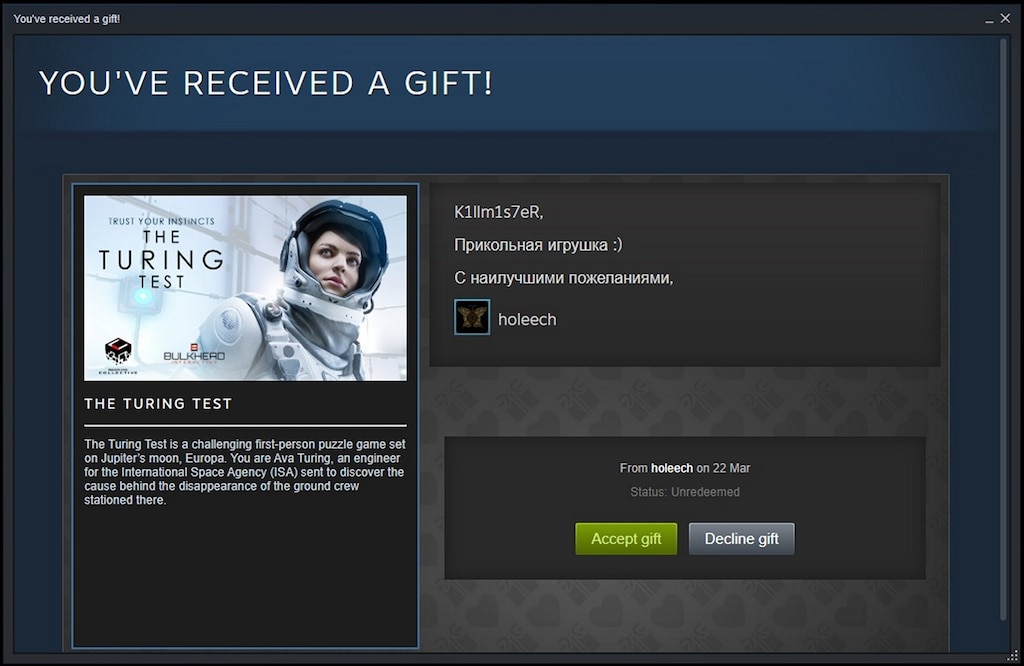 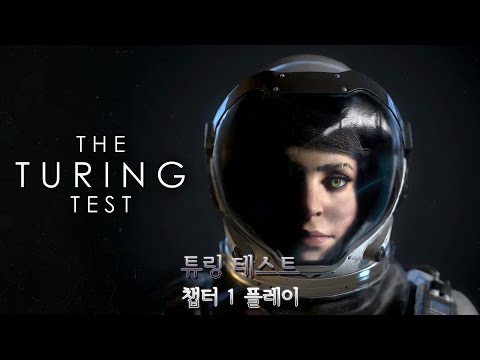 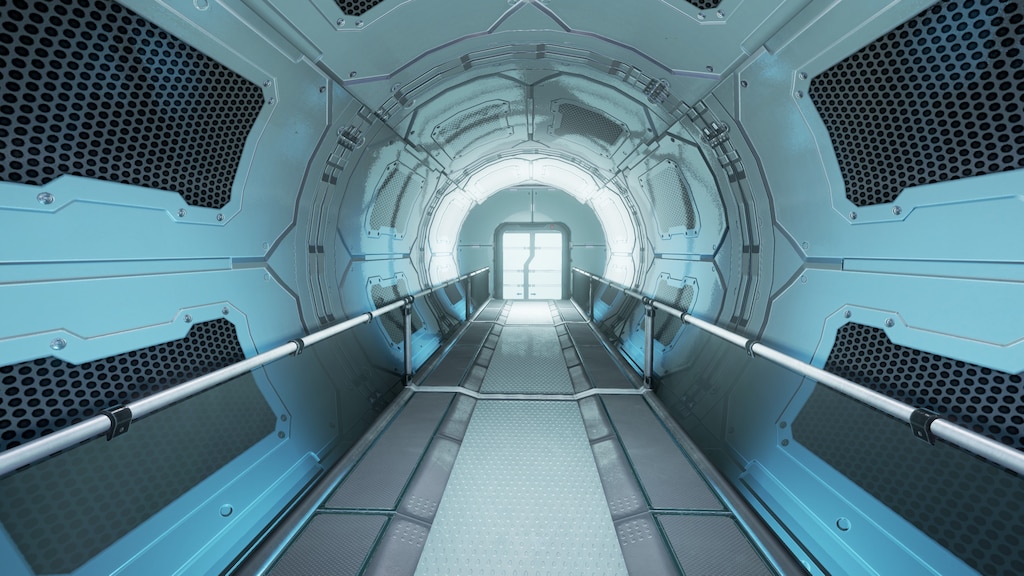 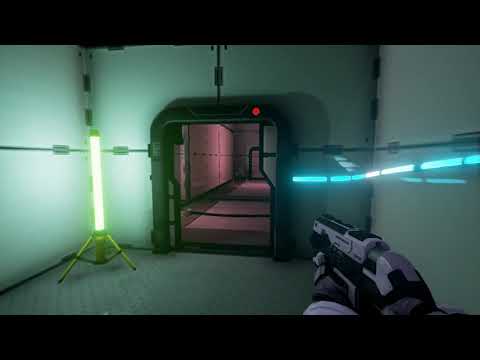 0
2
I broke The Turing Test 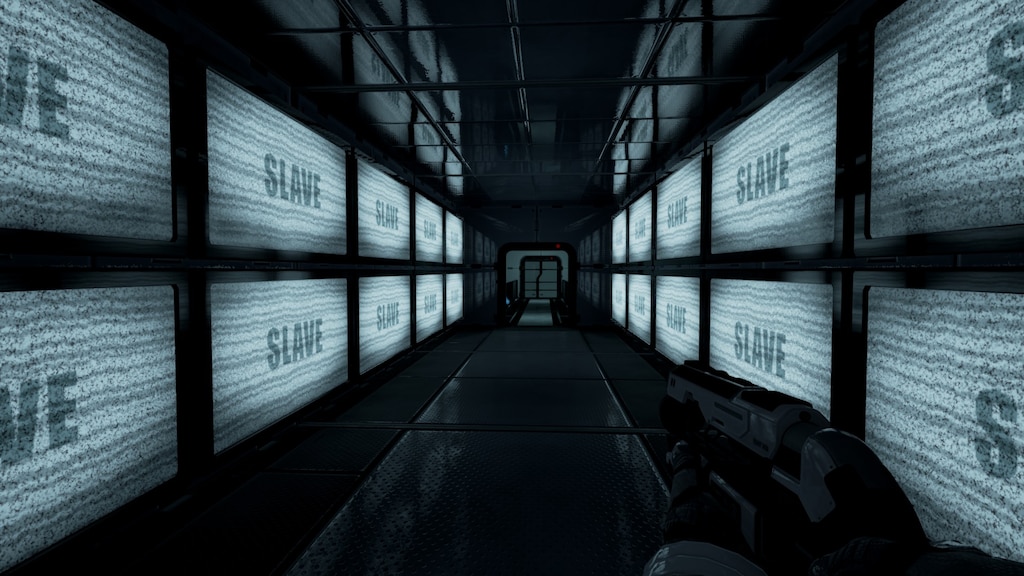 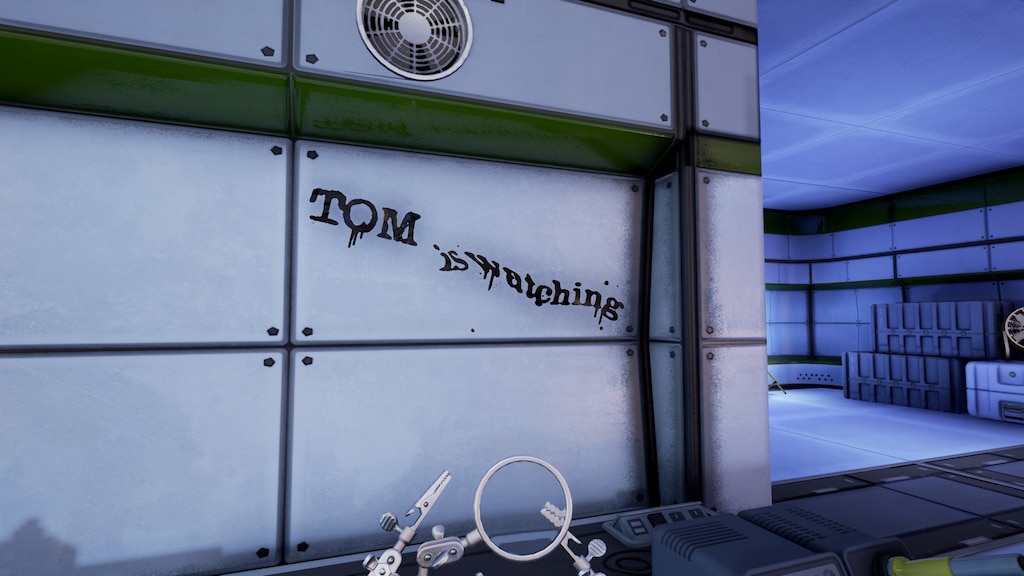 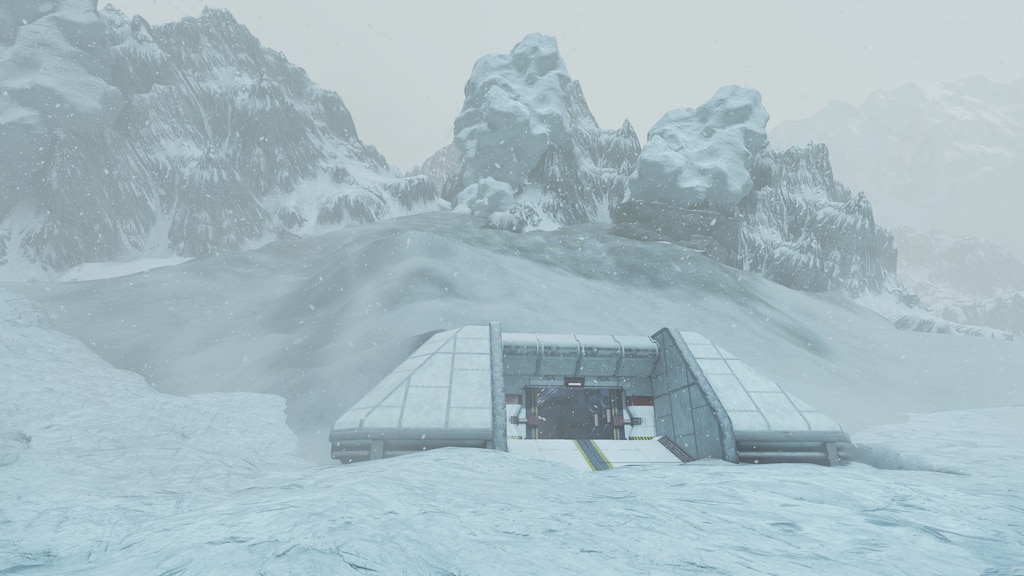 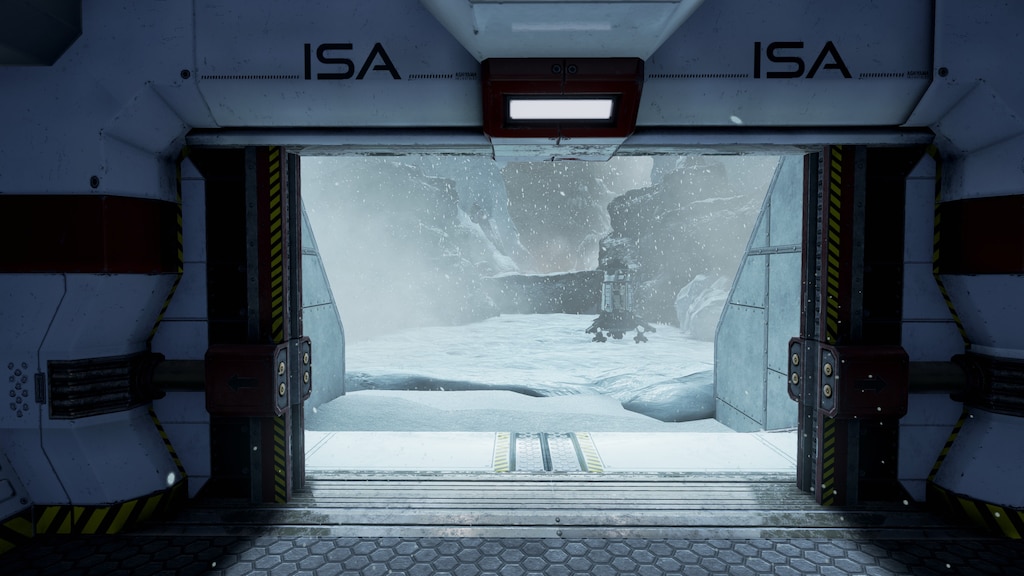 Recommended
2.0 hrs on record
The Turing Test is a beautiful, non-violent logical puzzle game suitable for virtually anyone. It has some nicely designed locations, well written backstory with pleasant voice acting and atmospheric, calm music. It’s a really relaxing and soothing experience, and a good break from action-packed games.

Despite having quite simple mechanics, the game is not getting monotonous, and the puzzles are getting more and more creative and challenging. The rise of the difficulty is well adjusted and doesn’t break the general immersion into the world.

I simply adore Ava – the female protagonist of the story and her AI companion TOM. The sci-fi elements of the backstory are quite well-thought and believable, making it also a coherent experience in terms of narrative.

One annoying flaw that I’ve encountered so far is the annoying incident occurs when you accidentally run into one of the items crucial for completing puzzles – the power box, which results in it being kicked with unpredictable force and in unpredictable direction. Sometimes this makes the box disappeared as it is being kicked outside map or into unreachable areas. That can be pretty annoying and forces you to reload checkpoints.

Fortunately, speaking of checkpoints in the game, they are very well placed and failing the puzzle doesn’t mean losing your precious progress.

The game is really worth trying, I strongly recommend it – especially for people not fond of violence in video games.

James
Apr 1 @ 7:38am
Tech Support
Subtitles for audio logs
Hello, First of all I want to say that I like this game so far, it's entertaining and the story is interesting. Although, there is a drawback, I don't see any subtitles for the audio logs we can find along the path, and I don't understand everything they say because of the quality of the audio, it would be nice to have subtitles. Thank you...
59

Tofu
Jan 3 @ 8:32am
General Discussions
Out of memory.
So after the first time setup, went to start up the game and selected Direct X 12 version. But hen I select it I get the an error message out of memory. Any one know anything about this issue. specs if needed. i9 9900X RTX 2080ti 64gb ram at 4000mhz
12

Iron Maiden
Nov 12, 2020 @ 9:52pm
General Discussions
No one has rated this review as helpful yet

Recommended
5.4 hrs on record
I'm an occasional, not expert gamer, so won't play for a long time, then will play quite a lot and then not for a long time again so I've found this is a good game that's not to difficult to start after a long time.
I like the storyline and am intrigued where it's going. The puzzles are not too difficult but not too simple either. I like the atmosphere of the game too.