Demolish your friends with hundreds of upgradable weapons shot from your customizable tank in this action-packed online multiplayer tanks game. Earn XP to level up and unlock new tanks, weapons, and gear. Fight against or alongside your friends for strategic team or free-for-all matches.
$6.99
Visit the Store Page
Most popular community and official content for the past week.  (?)
v1.0 Released!
May 22
After several years and 164 Updates (yes, we counted) we've officially reached Version 1.0. Keep reading for the update notes... it's a big one!

Attack drones will occasionally scatter throughout the sky, prepared for battle. Hit one with a shot and it'll join forces with your team and attack your enemies! Drones last one turn and fly away when they've completed their assault.

Supercharge your projectile with this rare multiplier causing 3 times the damage. Make sure to grab it before your opponents do- the extra damage is valuable! X3 buffs are considerably smaller and more difficult to hit than X2s.

The mission set list got a visual overhaul and now displays a previews of the mission. Tank positions, bumpers, buffs, and portals included.

In Vortex Mode, all shots must first pass through a portal before dealing damage to an enemy. It's similar to rebound, but with an inter-dimensional twist. Portals are continually rotating out, so you'll have to discover and remember which portals match up! 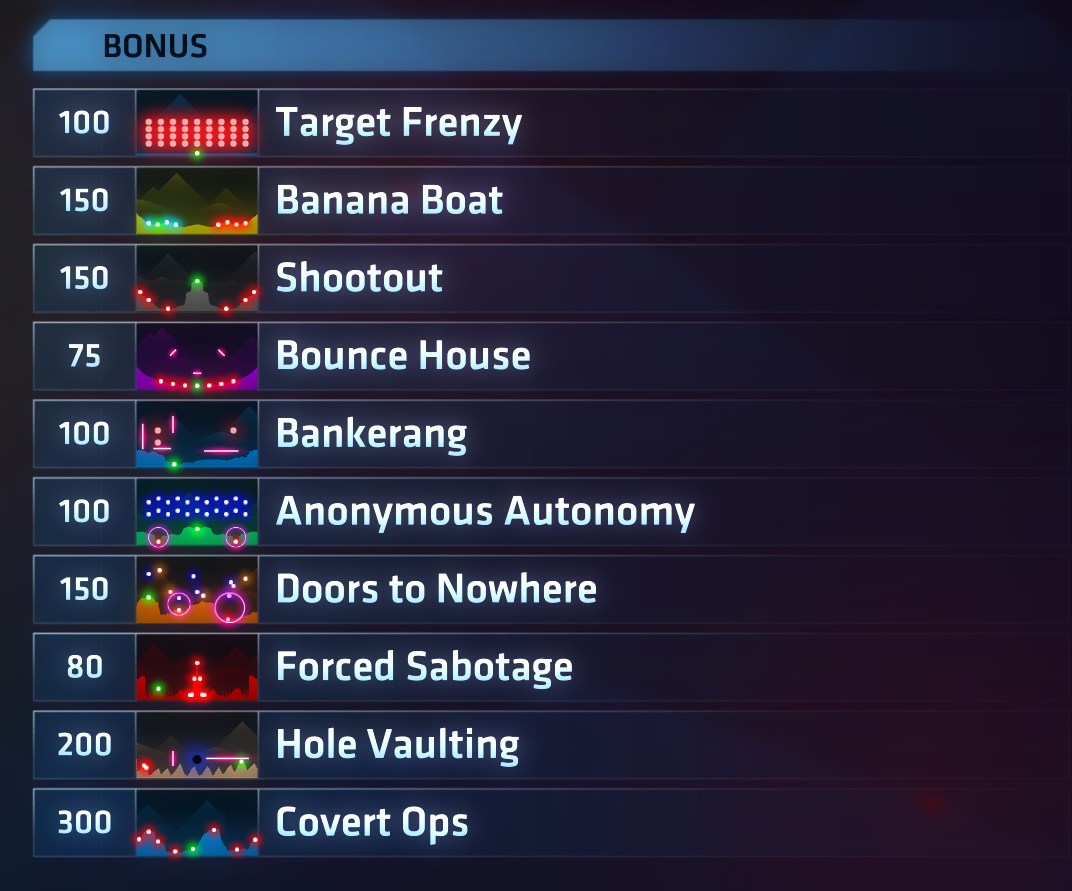 We've added a new campaign bonus set with 10 tough new missions leveraging updated game mechanics. New missions range from flushing out protected enemies with 22 attack drones to hunting down foes with nothing but a dagger. Complete the entire set for a reward. Good luck!

Instead of firing your weapon, use Overcharge to boost the damage of your next shot. Overcharge can be used an unlimited number of times, but the effects will not be stacked. Overcharge is useful if you don't currently have a great shot, or want to make that Sniper in your arsenal really count next turn.
Overcharge Damage Boost: 25%

Use Fortify to hunker down and take less damage next turn. Similar to Overcharge, it takes the place of firing your weapon. Fortify can also be used an unlimited number of times, but the effects will not be stacked. Balance the utility of increased defense with Fortify, or increased damage with Overcharge to decide which to use.
Fortify Damage Reduction: 25%

Items in the Gear Shop

We've received many requests to allow the purchase of items with gears in the Gear Shop, and it's finally a possibility! Stock up on supplies with your spare gears. Keep in mind, shield effects have changed (more details later in the post.)

Fire an autonomous attack drone into the play arena. The drone will lock on to an enemy and fire at the target.
Weapon Level 1: Drone
Weapon Level 2: Heavy Drone
Unlock Criteria: Complete "Autonomous Combat" Challenge

Similar to a standard Roller, but with a significant difference: The Permaroller won't automatically explode on enemy contact. This means you'll have to land the projectile a good distance in front of your target for a perfectly timed explosion. With the added difficulty comes increased damage- Permaroller packs a punch.
Tier 1: Permaroller
Tier 2: Heavy Permaroller
Unlock Criteria: Purchase Permaroller in the Gear Shop

Player names have received a subtle visual upgrade. The color gradient indicates whether the player is an ally or enemy.

Hovering over an item with your mouse now displays a concise item tooltip describing the item's effects. Mostly helpful for beginning players learning the game, but also useful to remind players the effects of the two new items, Overcharge and Fortify.

Obstacles like Bumpers, Portals, Black Holes, and Attack Drones now have a chance to span multiple turns. This means if you don't grab that "x2" buff, your opponent just might!

Trick out and soup up your gun with a stylish Laser Sight upgrade.
Unlock Criteria: Three Star Badge (★★★)

Each tank get's it's own protected bunker. Watch out for grenades!
Unlock Criteria: Complete the Bonus Missions

A seemingly insignificant addition, but will make a huge difference when you think a mission is impossible only to discover you've had items the whole time. Also helpful to beginning players.

Feel the beat... and force everyone else to as well.
Unlock Criteria: One Star Badge (★)

Select weapons can now effectively penetrate shields. Some of these include:
Audio Enhancements
Two brand new tracks have been added to the score, bringing the game to 10 unique pieces. Explosion sounds have been revamped with more variety and more powerful sounding blasts. There's a new confirmation sound when you lock in your shot. Several other small additions.

Many More Improvements
The list goes on and on, but here are some notable ones:
Thanks
I want to thank all of you so much for supporting ShellShock Live for so long, some of you even from the Flash days. It's a dream come true to be able to work on a game I love for a living, and I'm both excited and proud to have reached Version 1.0. I watched the old Steam Greenlight trailer for SSL recently, and it's almost comical how far things have come. Contrast that to the New v1.0 Trailer released today- crazy.

Does this mean the end of updates?
No way! There's much more in store. :)

EDIT:
Bugs fixed since v1.0 launch:Make sure to restart Steam to get the latest hotfixes!

Common Shots for Beginners
As title says. Picture guide for a basic idea where your shot will land when using 2 very common shots. Nice for beginning players!
8
38 ratings 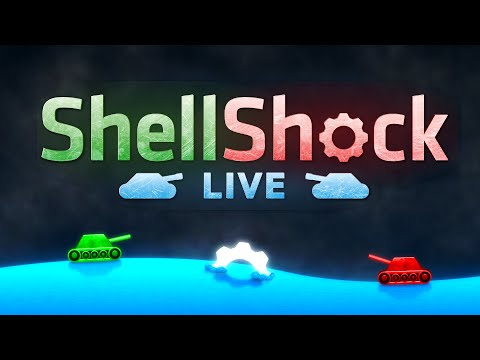 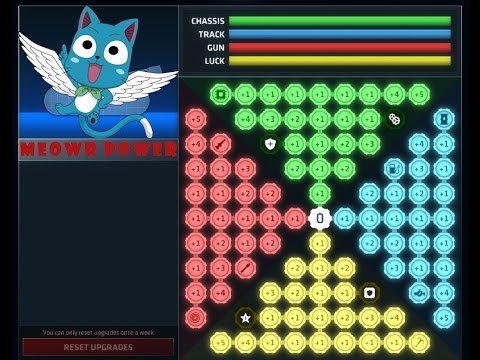 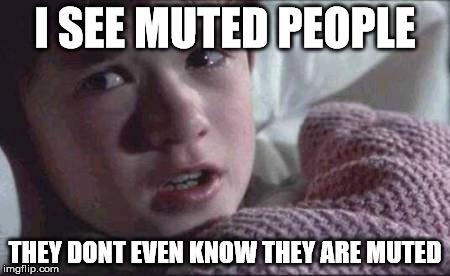 delta, PhD
View artwork
Why do side wall bumpers not count for Rebound mode?
I had a perfectly good shot that bounced off what appears to be a bumper, but because it wasn't a *spawned* bumper, it just didn't count. It takes skill to hit a target off of the side bumpers too, ya know.
5

timeshifter
Jun 3 @ 2:28am
General Discussions
Are there plans for an "Official" matchmaking system?
I just feel weird joining random people's lobbies where they can set whatever rules, kick people, refuse to ready-up, etc etc... So much so I ended up refunding at the end of my 2 hour window. I will definitely re-purchase this if it ends up getting a ma...
13

The Big XP guide
An up to date guide for XP that also provides realistic estimates to xp gain.
13 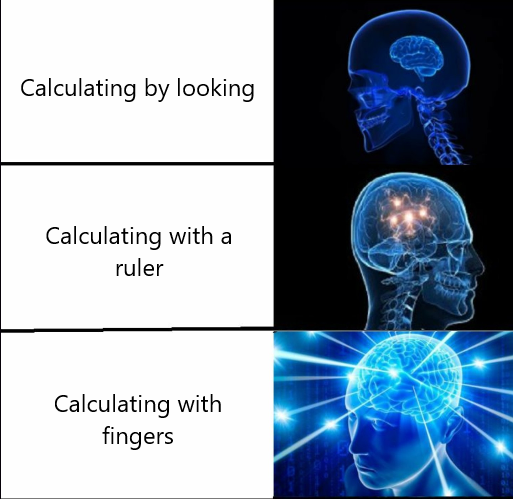 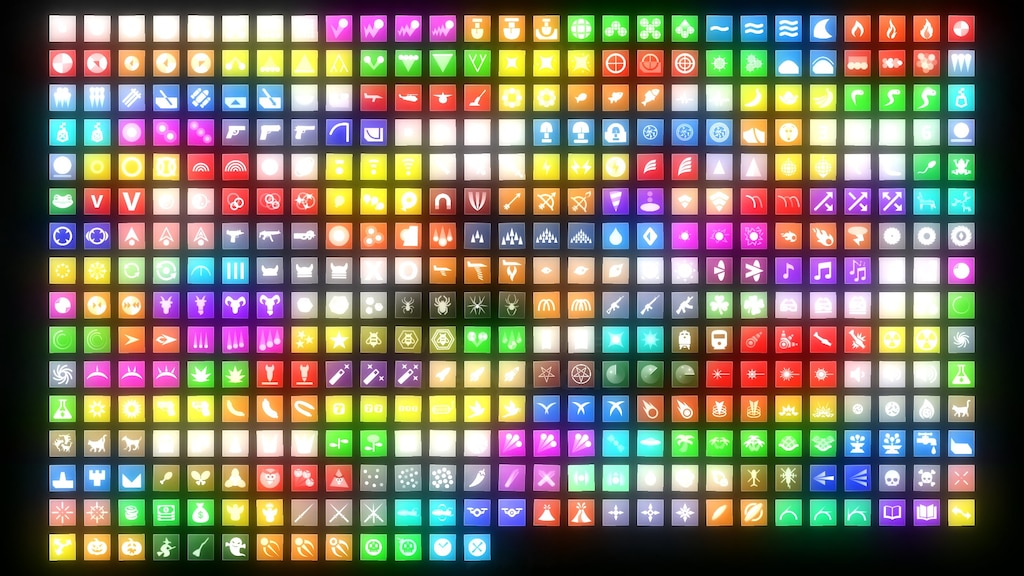 Recommended
52.1 hrs on record
Just picked this back up after finding out that v1.0 was released. Even more fun than before! 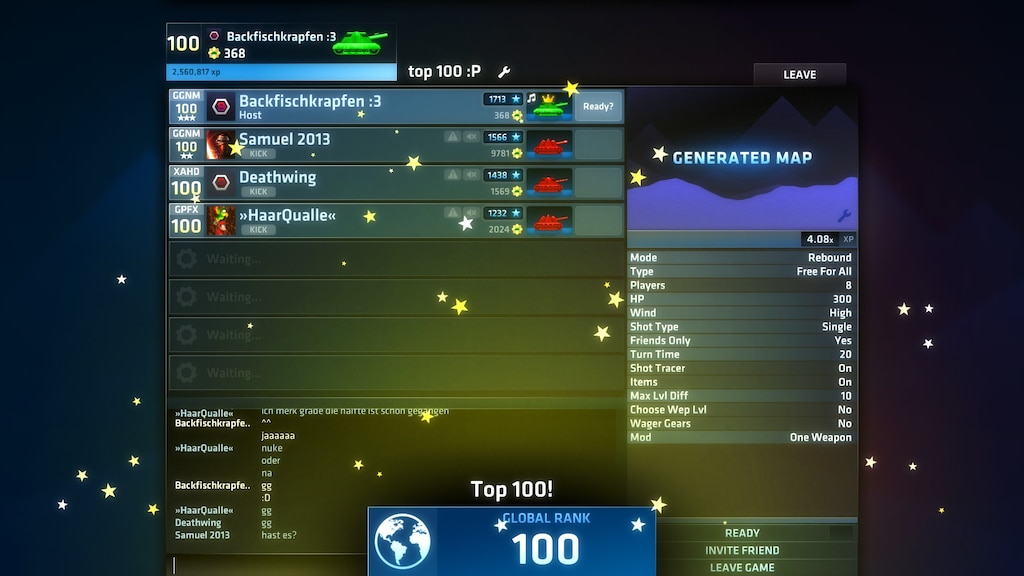 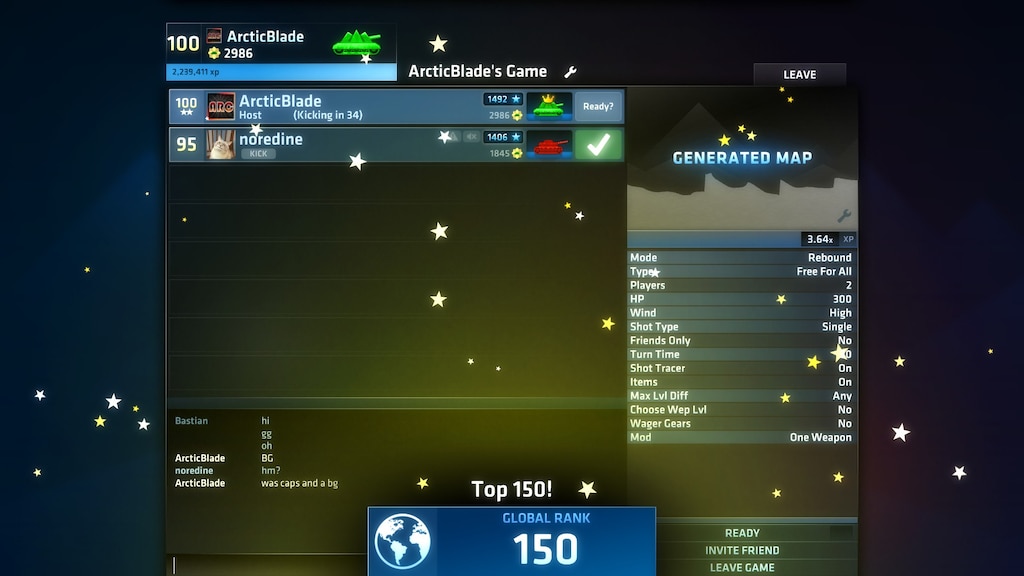 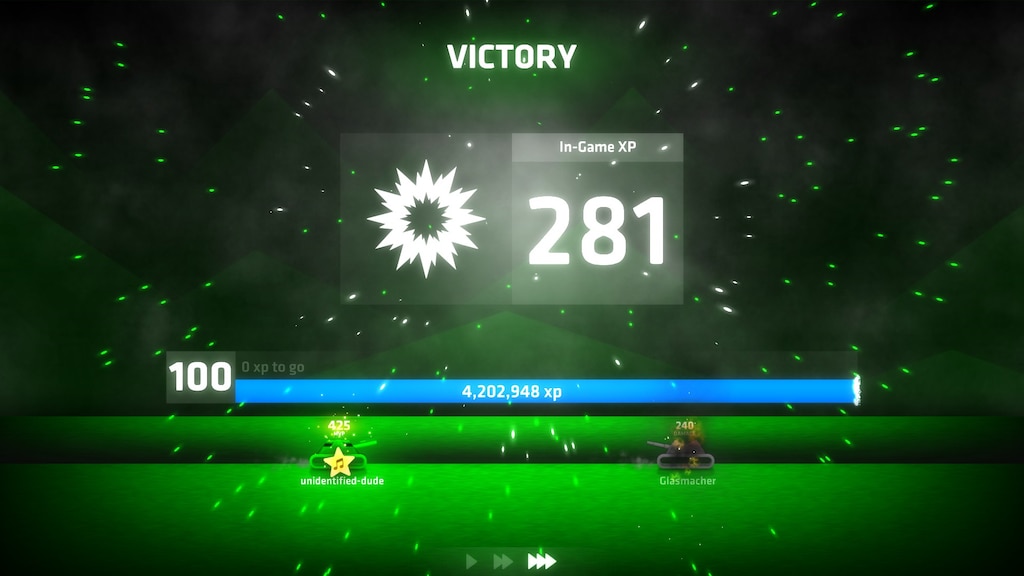 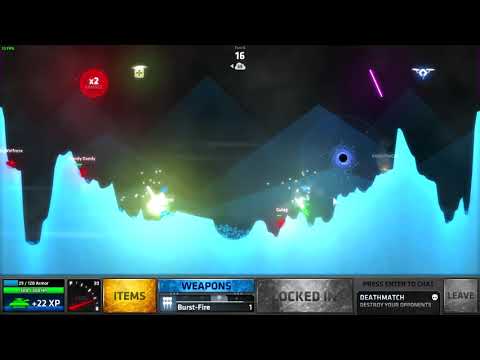 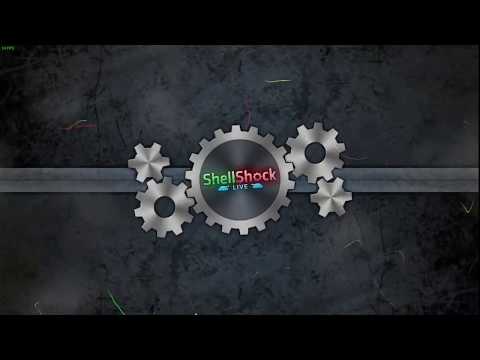 The true shoccer guide
Ok so first of all I saw a guide claiming shoccer was the newest game mode but then followed up with 1.4k and hr in which is completely false Of all time playing shoccor I was able to get 4-6 k an hr I've done a test of all game modes heres what I foun...
5

How to ACTUALLY get god rays
This is a guide, not some "friendly" players rant. This guide will explain how to obtain the weapon god rays.
4

SandTag
View all guides
Is there still that achievement where you play/win against kChamp?
I don't remember what exactly it was, but achievement/gun unlocked when playing/winning against kChamp. Is it still in the game? Is there other ways to get it? I remember something like players level 100 who was the achievement can transfer it acting like...
9