Control a car full of jerks as they explore cities, recruit weird people, rescue dogs, argue with each other, and face gigantic swarms of slow zombies. Randomly generated for a new story and rare events every time you play!
$14.99
Visit the Store Page
Most popular community and official content for the past week.  (?)
Death Road Testing Branch for LIVER Update (Windows) - March 5
Mar 5
Continuing the beta testing branch, about halfway done with adding changes. Read below for changes today to the beta, and also remaining plans for this update.

- Removed some buggy extra pixels from Tam O' Shanter
- Made character generation not use the new skin colors or head types, so no more blue people at random. They will be custom character parts only

- Removed the goblin laughter from the Stamp User road check, which I was using as a debug noise

Death Road to Canada
46
8
Night time theme name?
When the sun sets. A very eerie but great track starts playing. Anyone know the name of it?
1

crolaa
11 hours ago
General Discussions
Death Road Testing Branch for LIVER Update - March 3
Mar 3
Continuing the beta testing branch with more new changes. The "Stamp Users" are all in and can be found in game, with all their different Stamps. We're also starting to add the new customization options.

- MORE UNLOCKABLE HATS added. Will later give them new conditions for unlocking them, currently if you unlocked all the previous hats, you'll get the new ones
- Added new male hair and head options, and new skin color options. Currently they're added to the main rotation, we will likely make some of these unlockable or limited somehow

- GIANT-DAWG now points at things instead of sumo wrestling, and gets 3 health instead of 2
- GIANT-DAWG can now pick up and use weapons as its unique ability
- All Stamps now have 6 fitness, which is kind of moot now
- All Stamps now have infinite energy, and no longer bleed
- Most Stamps are now a lot faster
- ProPAIN now has one health, is slower, and explodes on death (explosion does not hurt allies)
- CharBro can now be found in the trader camp rare recruit list
- Having a Stamp User in your team can lead to finding more Stamp Users in Road Events. The more you have on your team, the faster you find the next Stamp User, though you can still find all of them (eventually) with just one Stamp User in the team

- Fixed a sound bug with explosions

MODDER NOTES/UNDER THE HOOD
- Trying a new event structure where most of the events are contained in one file, per update

Death Road to Canada
46
4
Death Road Testing Branch for LIVER Update - Mar 1
Mar 1
We're gearing up for another major update. I will be pushing a bunch of changes we've been working on, a bit at a time. Help us test things out and we can get the update out sooner!

CHANGES
- New section for News to the right of title screen, as everyone hated the previous system. This also includes an easy link to the Official Discord, and a way to turn the News stuff off until next update

- Test out the upcoming Jojo Reference Special Character (one out of four we're putting in this update, eight if you count the Stands)

- New Perk: Pyromaniac. You get a Blowtorch that regenerates between missions, and immunity to fire. You can pair this with Phoenix to retain fireproofing after your first death, or combine it with Specialist to sacrifice all weapon slots to upgrade your Blowtorch to a Napalm Launcher! Have fun

- New Trait: Fast Learner. Start with low skills, but gain double points to Shooting, Medical, and Mechanical skill every time you get a respective skillup for one of these. This effect stops at 4 in each skill, and if you get a skillup at 3, you'll still shoot straight to skill 5

- CIVILIZED NERF: Only gives 1 point in medical and 1 point of mechanical now. Still gives the extremely overpowered combo of good personality stats, though

- Giant buff for Sacrificial Altars. In exchange for losing 2 health, a surviving character now gets Strength, Fitness, AND Shooting instead of just a chance for one of those. If someone dies to the altar, in addition to the previous loot table, it will also give the entire rest of the team a point in strength, fitness, or shooting at random

- The Road Pause Menu now lists the speed of your car 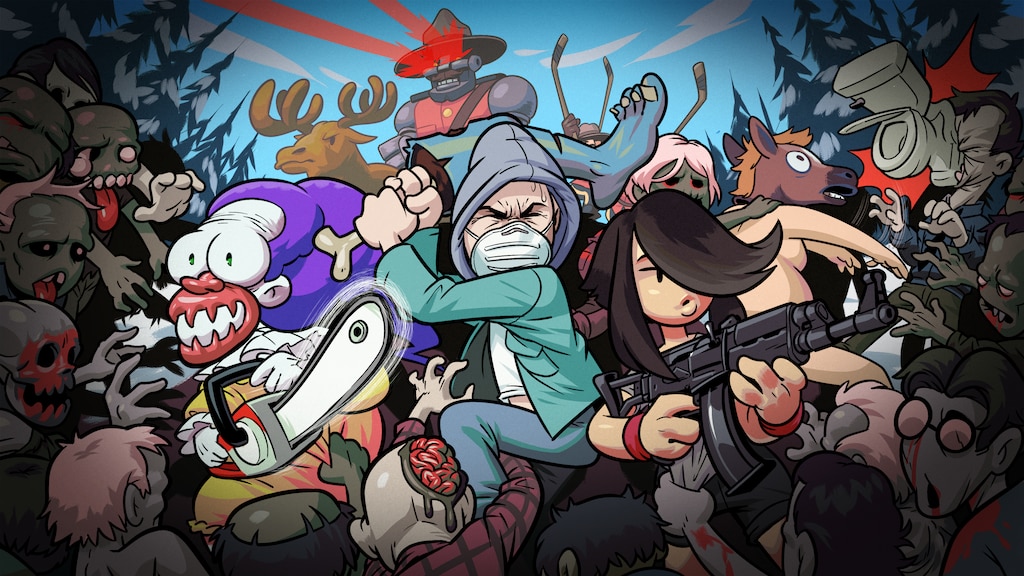 [Updated] Death Road to Canada: Class Archetypes And Strategies
Class architypes for Familiar faces/Extreme Mode or the Normal game. These classes will see your group safely to Canada. I have passed the game with these usual suspects that you would find in the Zombie Apocalypse. I also go over some tips and tricks to h...
278 ratings

Save Game editing guide
This guide tells you how to edit the save game file in order to add items and supplies - allowing you to enjoy parts of the game you otherwise may not get to.
168 ratings 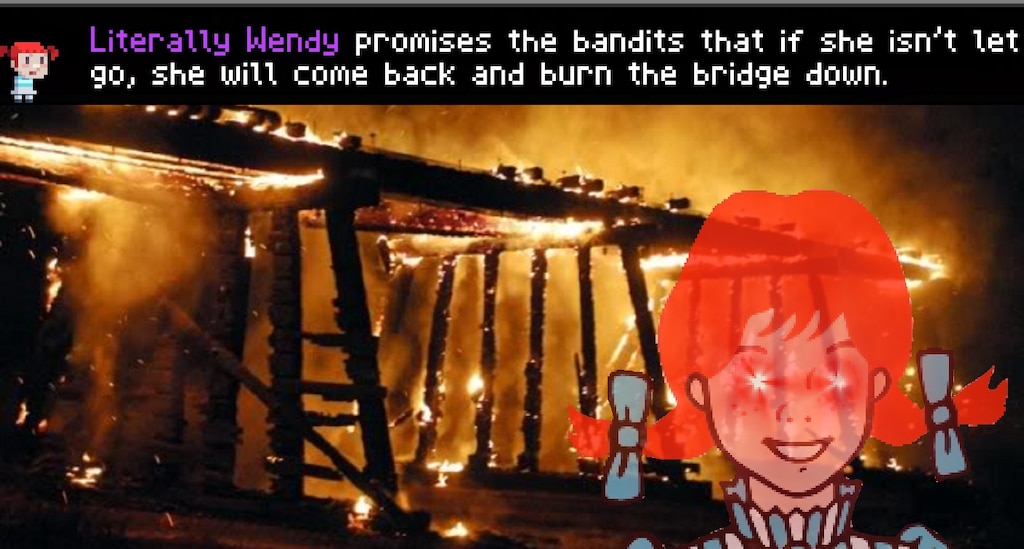 How to Survive the Death Trip to Canada
Hello everyone. I wanted to make a guide to help people on surviving their road trip to Canada.
161 ratings

SEND 'EM TO THE RANCH
View all guides
Artwork 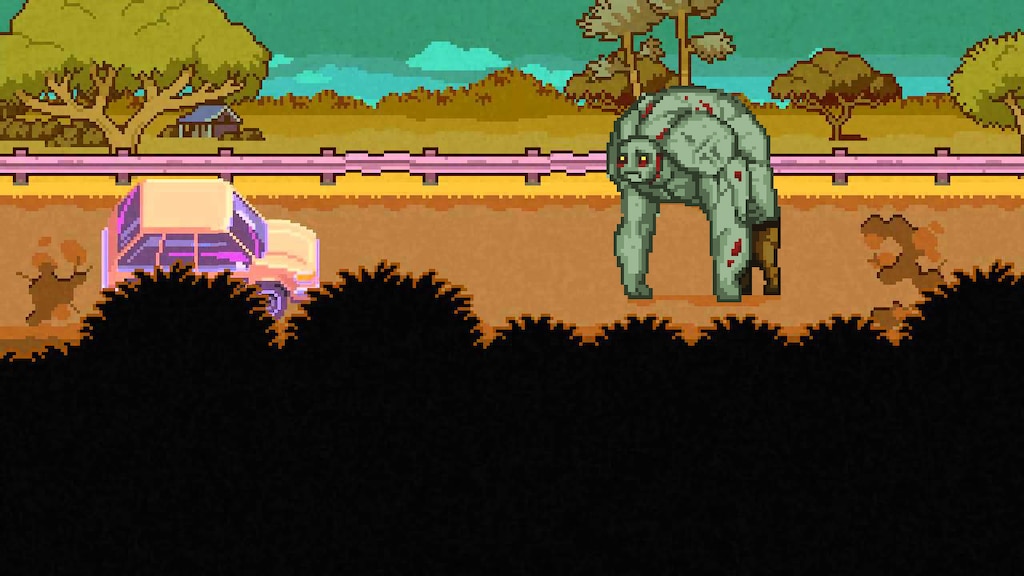 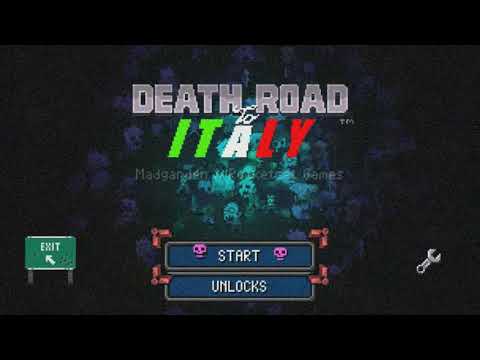 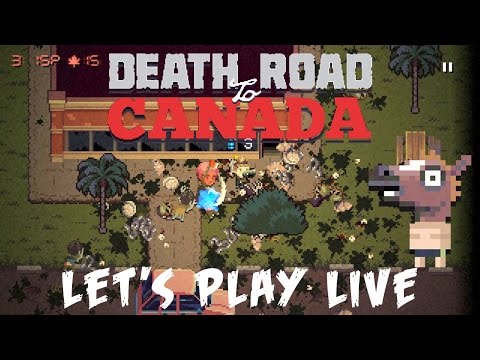 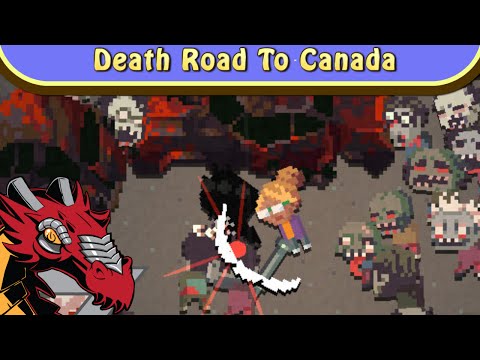 no profile
View all guides
Video 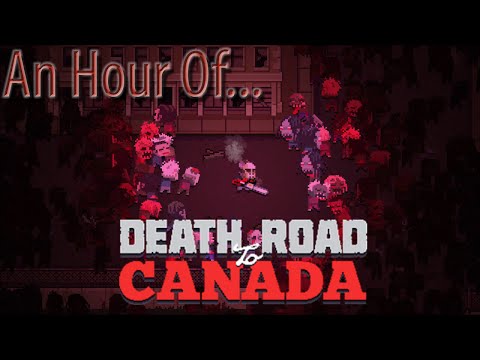 Recommended
2.1 hrs on record
i put more than 50 hours into this on switch. probably one of my favorite games of all time. ive played through it so many times and it never gets boring. please play this game right now or else i will shatter your kneecaps and slit your throat :)

Recommended
27.1 hrs on record
General: Death Road to Canada is a roguelike zombie game. It is full of random events, humor and organs… When you kill zombies they drop organs down on the ground and that brings some je ne sais quoi to the game. The game’s art style is really nice and the game is unique.

Gameplay: The game is randomly generated so anything can happen. Most of the gameplay happens when you go search for resources (e.g. Gas for the car, food and bullets) and smash those zombie heads, in different locations that the game lets you choose, and when you aren’t doing that, then you are driving and random events can happen. e.g. You can find trader camps, encounter bandits, find new people and dogs to recruit to your group who special weapons and personalities or find resources that you have a higher chance of getting depending on certain stats.

In the game there is a stats system for the characters where some are better at certain stuff like repairing or are more loyal and can be left to stay awake for the night to make sure no zombies or bandits come, this adds well to the gameplay.

The gameplay is really good.

Story: The world is full of zombies but you heard that Canada is a safe place to be, let’s take a road trip there!
The game’s ending is really epic, rewarding, humorous and it even has a ‘’Where are they now’’ segment for your group’s members.
There isn’t a big story in this game but the small one it has is perfect for it.

Problems: I didn’t notice any problems with the game and I didn’t encounter any bugs.

Rating: I’d give the game 10/10 because it has really good replay value due to it having many game modes that make the game harder or more chaotic (The fun way), for being randomly generated and being generally fun to play. Easily worth the price even when buying it when it's not on sale. 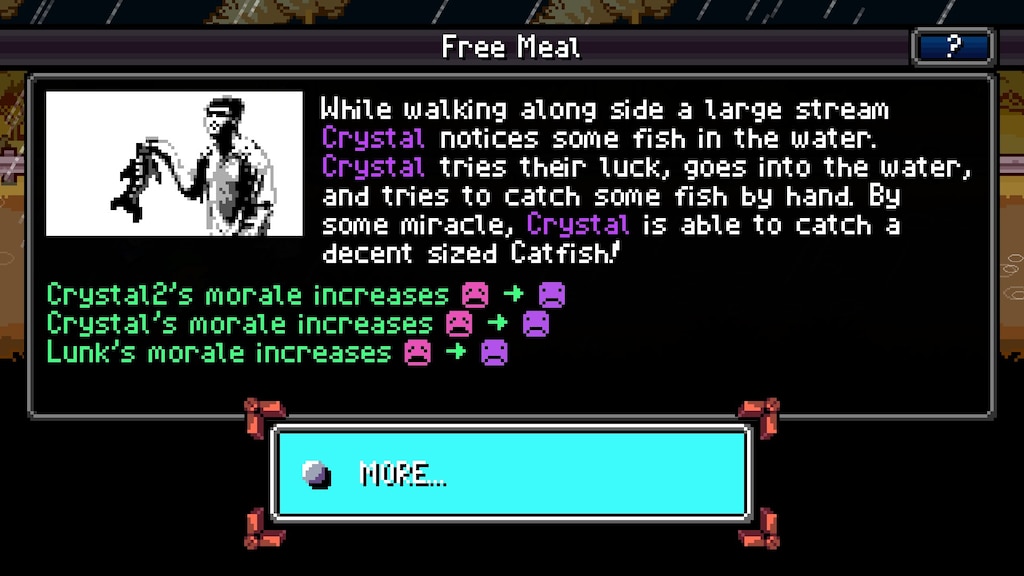 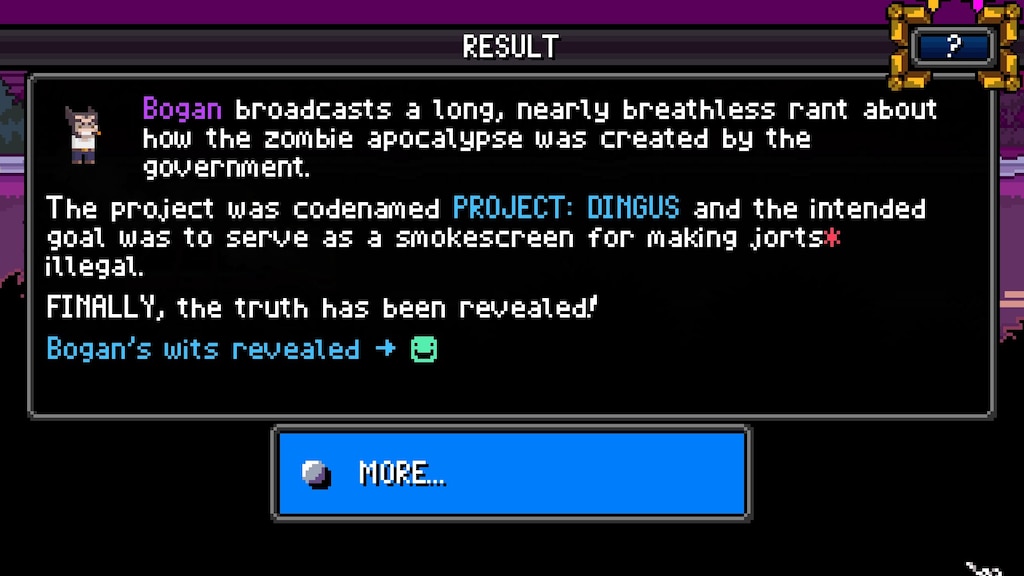 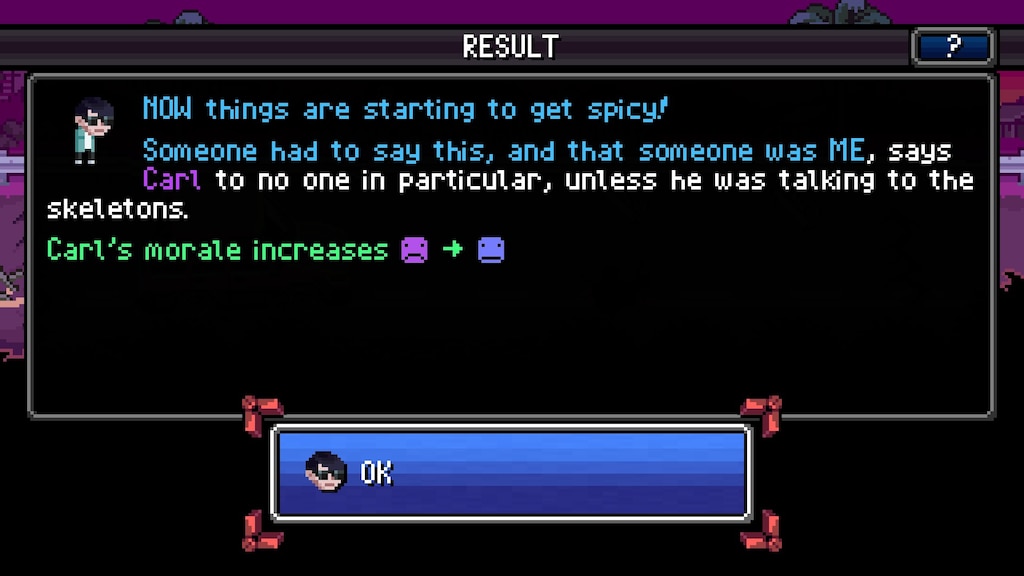 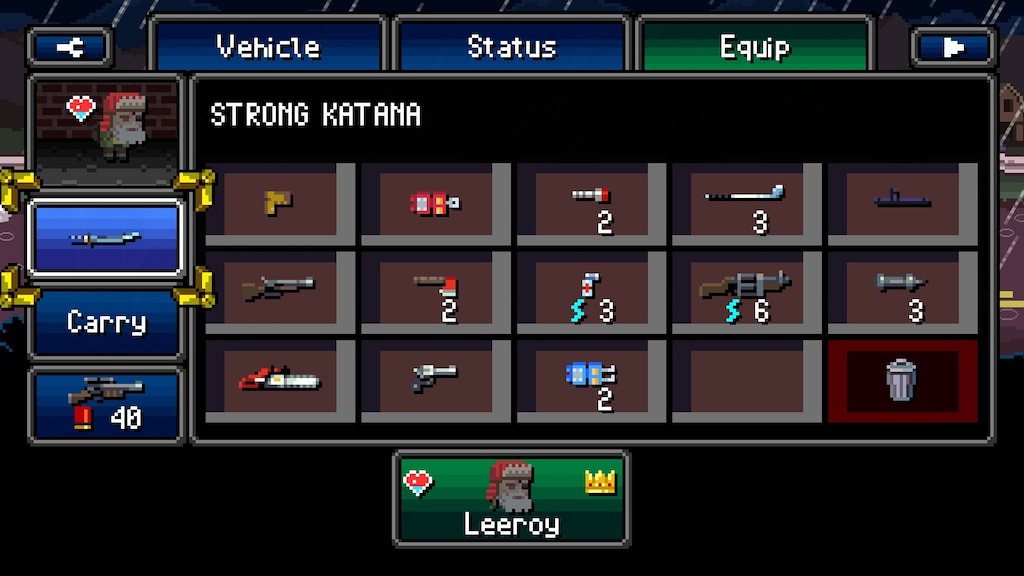 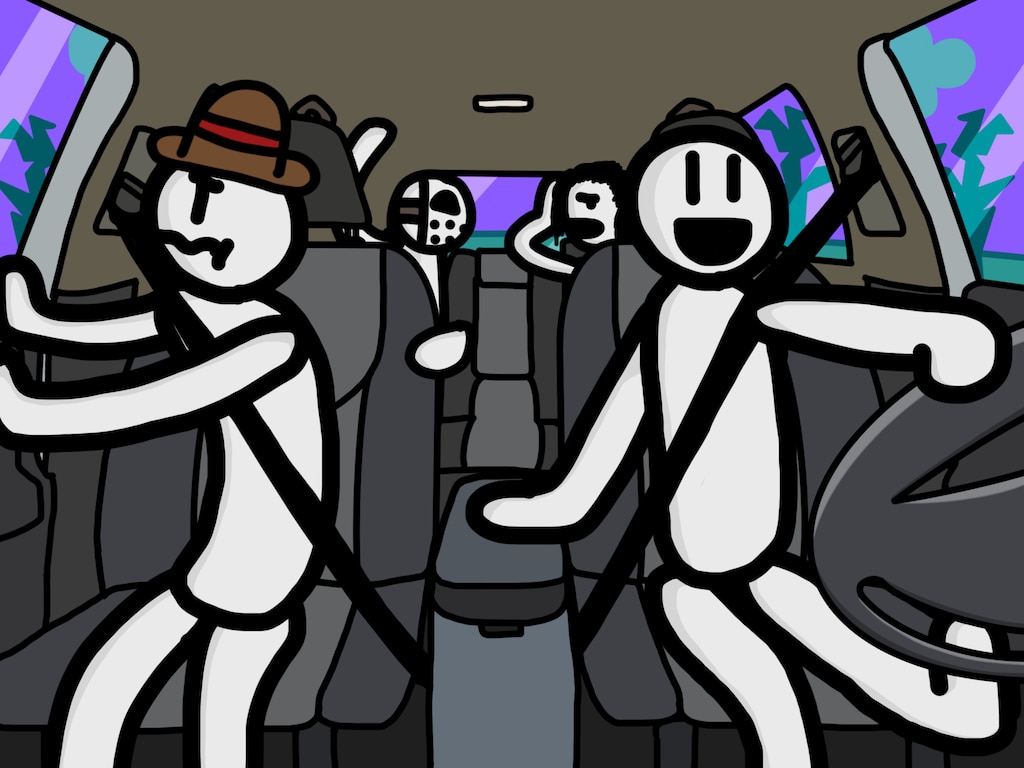 Pixel-Master64
View artwork
Cars blocking tunnels ?
i've been coming back to the game recently and have been coming across this problem multiple time where a row of burnt / destroyed cars blocked the path forward (and on multiple occasion created a death trap because of all the zombies chasing ) have anyone else come to this problem is it even supposed to be a problem ? am i supposed to push the row of cars ? it sucks to have worked semi-hard (more like tedious really ) only to be blind sighted and got killed by something that doesnt feel like i caan contr...
3

Max F.
Feb 26 @ 9:14am
General Discussions
HELP NEEDED!
I downloaded Death Road to Canada, and it has green and black lines all across the screen. has anyone had this problem and how do i get rid of it? Help please!!!
7

winston.genat
Feb 3 @ 11:32am
General Discussions
Screen Tearing after Humerus -> Kidney, Film Grain Option Does Nothing
I just updated this game to the latest Kidney update, all the way back from Humerus, and I'm noticing tons of screen tearing. Yes, I've applied V-Sync. It seems to help generally, but then something in the game occurs, then the tearing is back again. This pretty much ruins the game for me - is there any way to fix this?...
1