Drinks with Abbey is a short, slice-of-life visual novel about a first date.
Visit the Store Page
Most popular community and official content for the past week.  (?)
My First Game
Dec 25, 2019
I'm very excited to have released my first visual novel today and look forward to seeing what everyone thinks about it. I woke up this morning thinking about my history with game dev and why I made this game, and decided to tell that story here.

I'm Paul. I'm 31 years old. I've been into games and interactive fiction as long as I can remember. I had Choose Your Own Adventure books as a kid. In high school, I programmed text-based games on my TI-83+ and distributed them to my classmates (I actually got suspended for making an offensive game, but that's a different story). After I got into web dev as a career, I made online visual novel builders, mostly just for fun (I could never catch up with Ren'py). Over the years, I've gone through phases where I'd say, "I want to be a [writer/musician/graphic designer/programmer]" and spent a lot of time working on that skill individually, but I could never stick with just one. It took me way too long to realize I didn't have to.

Games put everything together. And this is what I've decided to do with my life. I, like anyone interested in game dev, have aspirations beyond my means. That is to say, I don't currently have $200 mil lying around to make the MMO I want (ha), but I can make a visual novel. This was the first step in my journey - something I could make with my own money and in a reasonable amount of time. I told myself at the beginning of 2019 that I was going to create and release a visual novel by the end of the year, in my spare time, and I did. While it isn't technically the first game I've ever made, I consider it to be, because it's the first time I've put more than a casual amount of effort into it, hired artists, and released in a marketplace.

But why this particular game? When I was doing research at the beginning of this project, I felt that VNs as a format had a lot more potential than is actually seen in the marketplace, both in terms of what can be done with them and who they can appeal to. I also found it interesting that there are so many dating sims, but few of them were even close to my own experience with dating, or even trying to be. Don't get me wrong, sometimes I want fantasy and melodrama, but sometimes, I want to be in a more familiar place. That's what Drinks With Abbey is.

DWA is a proof of concept for one type of visual novel I want to make on a larger scale and with more resources. I want to find out if anyone is interested in seeing more VNs like this, and if you are, I hope you'll follow and support me in my next endeavor.

Thanks to everyone who plays my game,
Paul

Drinks With Abbey
10
31
A Good Start, Visual Novel Drinks With Abbey.
-I Found this Game by chance and Installed it. -A Good Game with Many Endings, more unlockable endings and longer STORY. -I still play it. -A Good place to have a Drink and have an Appointment with "ABBEY" ;D. -Thanks for sharing this game for FREE. - I ...
3

Angelfreire29 {U.C}
Jan 16 @ 2:32pm
General Discussions
What I think about "Drinks with Abbey"
hey folks and hello DEV :) first, congratulations to the game. I understand, its a prototype. here are my thoughts: 1. I dont like Abbey. I dont like, how she looks, what she says and what she wears. although shes truly not my type, I decided to give th...
2

Mic
Jan 16 @ 6:32pm
General Discussions
music list
hey i absolutely love the music ! i was wondering what the name of the artists/songs are ? Thanks
8

Drinks With Abbey 100% achievement guide
Here are the full paths of each ending.
17
52 ratings

Trashes
View all guides
Would love to see a game based on the second date and beyond!
This game was great. Short but sweet. Hopefully the next title will be a sequel to this one, as I'm dying to know what happens next!
4

Slim Jim
Jan 11 @ 2:25pm
General Discussions
Skip button added
Dec 30, 2019
For those who want to knock out the achievements ASAP, use the newly added skip button (right of the play button) and this guide: https://steamcommunity.com/sharedfiles/filedetails/?id=1947867215

But I hope you play it at least once for real. :) 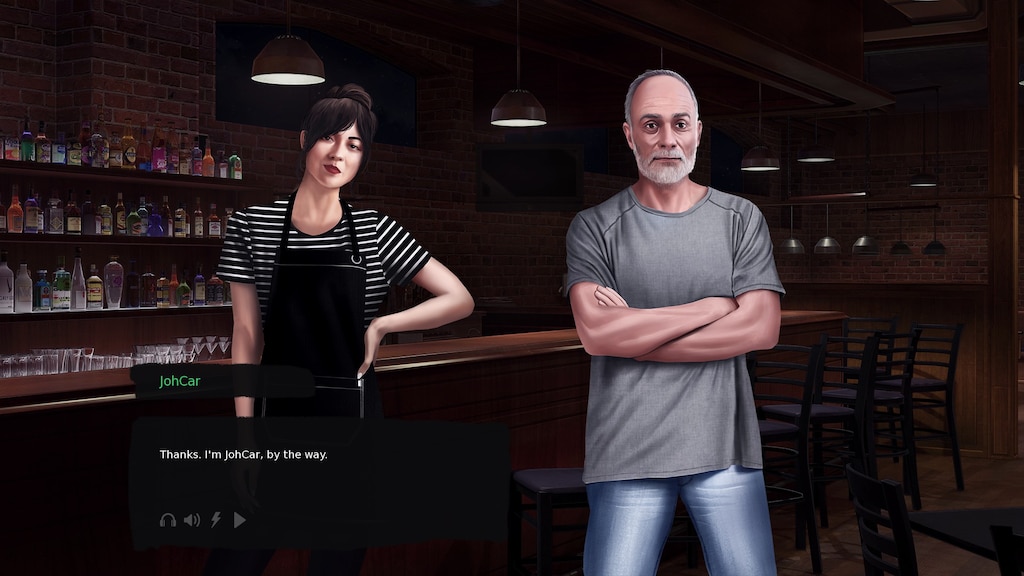 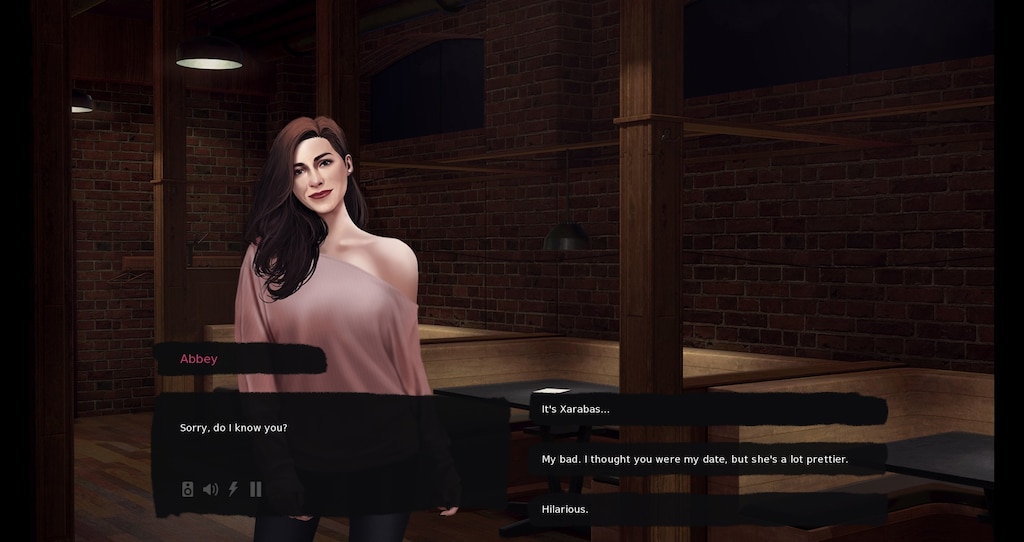 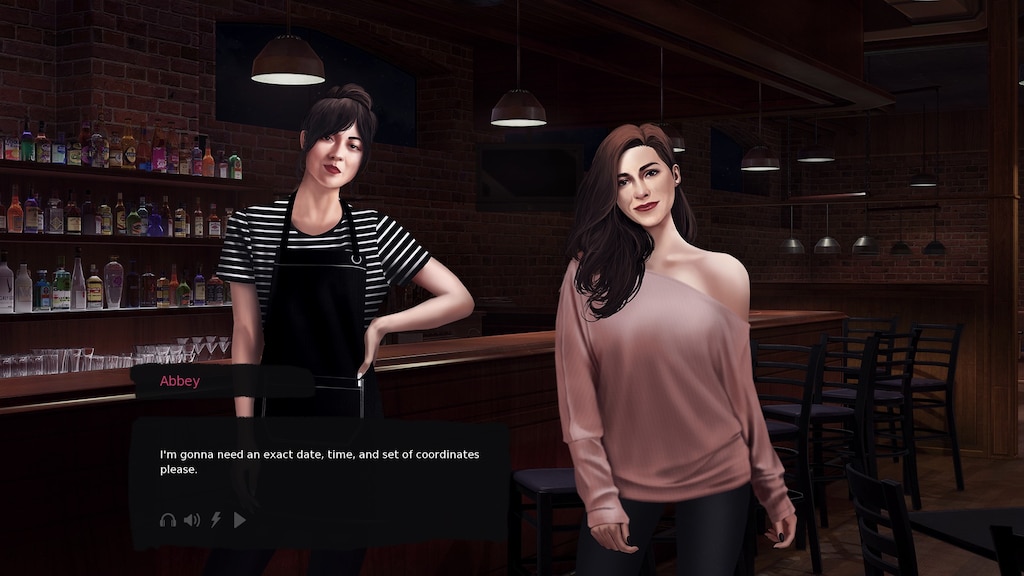 Recommended
1.2 hrs on record
> Game emphasizes being honest
> I say that the waitress isn't that hot since she looked kinda "meh" to me
> Abbey accuses me of being a lying ♥♥♥♥♥ who's just trying to impress her/not make her jealous
> That's when I learned that when a lot of people say "I like someone who is honest", what they really mean is "I prefer someone who gives answers that I like"

Observe how she's alright with throwing the wool over your eyes (the waitress, gives false idea of pool skills, etc.), yet if you tried to mislead her in any way, she's all "dude wtf!?".

All that aside, I like this game and will definitely play this for all the achievements to see all of the endings. And the fact we seem to all have different ideas about Abbey shows how complex, yet consistent you've built her character to be even if I'm of the opinion she's someone who likes to manipulate and toy with guys for the same reasons a child might pull the legs off of a spider. Still, it's an upgrade from the usual female stereotypes these types of games have.
A developer has responded to this review 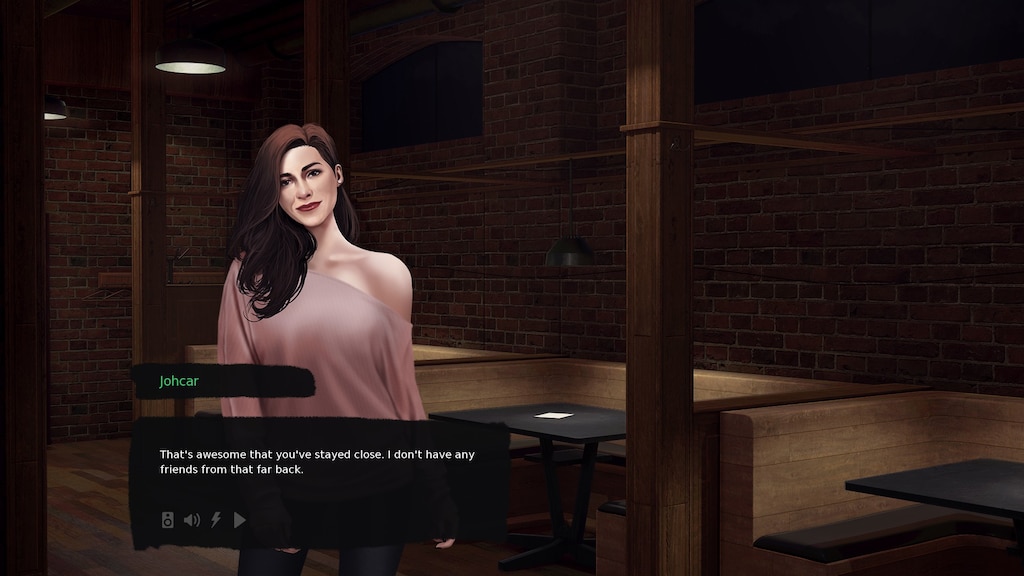 Not Recommended
0.3 hrs on record
Very uneventful.
Same amount of time you take in this game,
you can look at adult material and have a much happier ending.

OVERALL:
0/10
A developer has responded to this review 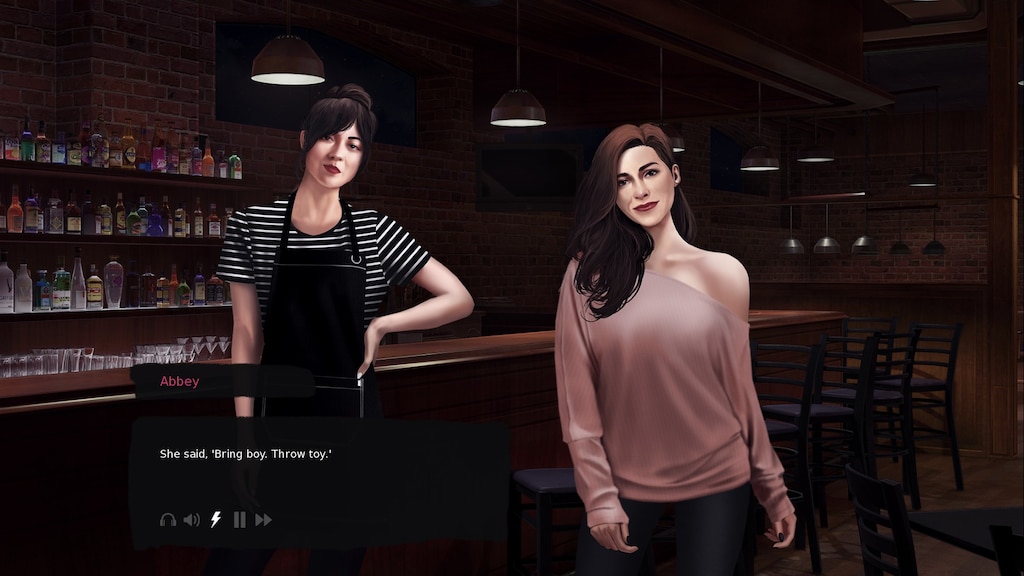 theOtherGuy
View screenshots
Donationware DLC
Dear Developer, Congratulations on your game. I would like to play it but I would love to help financially support you, first. Please add the option to purchase the game as donationware as a DLC. Please see games from Hijong Park for examples of this ...
4

Tempest
Jan 6 @ 1:19pm
General Discussions
No one has rated this review as helpful yet

Recommended
0.7 hrs on record
Really good visual novel but I really wish it was longer.