Store Page
Starbound>  Workshop > swefpifh's Workshop > Law Enforcement 0.7 > Discussions
This item has been removed from the community because it violates Steam Community & Content Guidelines. It is only visible to you. If you believe your item has been removed by mistake, please contact Steam Support.
This item is incompatible with Starbound. Please see the instructions page for reasons why this item might not work within Starbound.
Current visibility: Hidden
This item will only be visible to you, admins, and anyone marked as a creator.
Current visibility: Friends-only
This item will only be visible in searches to you, your friends, and admins.
Law Enforcement 0.7
Description Discussions5 Comments212 Change Notes 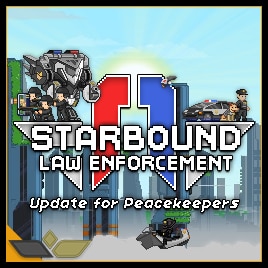 Want to join the discussion? You need to sign in or create an account.
Date Posted: Apr 28, 2020 @ 12:13pm
Posts: 0
Start a New Discussion
Discussions Rules and Guidelines
More discussions

55
Report a problem or a bug

Reviews :
- A PBI quest are available in Police HQ if you have finished 3 classics missions.
- 'Police Patrol Ship' are updated for the PBI mission.
- P1078 Armor are now available by a reward crate in Evidence Room.
- P1078 Augments are now availables in Armory Room.

Reviews :
- Problem with XP and Grades for Police Badge fixed.

Reviews :
- Problem with HC99-Carrier Drones fixed
- Agent Mox Fulder's quests added but available for PBI mission only in v6.5.0
- P1078 Armor reworked
- Hostile P1078's ID modified (If you have this armor in a chest or in your inventory or on you. Ths game will crash just one time)

Reviews :
- Convert your 2 PeaceCredit into 1 Insign with 'Police Converter' side of teleporter in Police HQ
- Recipes for Police Converter.
- Quest added for Mission 1 and 2 in Police HQ.
- XP added in reward for the Badge Quest.
- New item quest added on the first boss. (This evidence item can be used for quests.)
- One dialog added for the first mission after killed Boss.

Reviews :
- Problem with police pets in collection solved.
- More informations added in Description of police pets capture pods.
- Possibility to watching XP gained and your Grade too with the 'Police Badge'.

Reviews :
- Many decoratives added in 'Admin Station'.
- When you destroy a Law Object, you destroy this item and you gain a contravention.

Version 0.4.2 :
➜ Minidungeons added on planets. You can find Police Stations for take quests, but police stations are very rare.

Version 0.4.1 :
➜ New quests added but not activated for the moment.

Version 0.4 :
➜ New police system added. You can found 'Protectorat Patrol Police Ship' on the galaxy map. It's you only way to access at 'Selling Station' now.
➜ 'Protectorat Patrol Police Ship' is available but it's not finished. Many decoratives objects missing.
➜ With the new police system, the outpost have been cleaned. Policers have leave this place (for the moment) ;)