Store Page
Train Simulator >  Workshop > Joethefish's Workshop
This item has been removed from the community because it violates Steam Community & Content Guidelines. It is only visible to you. If you believe your item has been removed by mistake, please contact Steam Support.
This item is incompatible with Train Simulator. Please see the instructions page for reasons why this item might not work within Train Simulator.
Current visibility: Hidden
This item will only be visible to you, admins, and anyone marked as a creator.
Current visibility: Friends-only
This item will only be visible in searches to you, your friends, and admins. 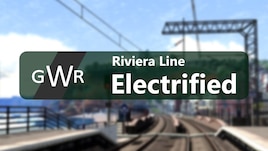 Joethefish
Offline
See all 32 collections (some may be hidden)

Riviera Line Background
Set in the area of the south west coast of England known as the English Riviera, due to its mild climate and sandy beaches, this picturesque line opened in May 1846, with a single track broad gauge line transporting holidaymakers from the city of Exeter to the Torbay resorts of Devon. By the end of the same year, the line had been extended to Newton Abbot, and two years later to Torquay – the current Torre station. It was not until 1859 that the Dartmouth and Torbay Railway linked the line from Torre to Paignton.

Riviera Line Electrified
Riviera Line Electrifed (formerly names "Riviera in the 50s") is a fictional electrification upgrade for the already up-to-date Riviera Line. As the former name suggests, this route is based in the years of the 2050s and thus, I have thought up just a little story, to shape the future of this route.

Welcome to the Future!
So as I was testing the quick drives, I question what I would use. Sure I could have just used a Scotrail Class 334, but it would not have looked correct being in Devon. So while I test-drove the route, I came up with a little story:

Great Western Railway
Great Western Railway (GWR) took over the Greater Western franchise in 2015. This went on for 4 years. 2019 saw the break down the First Group and GWR becoming their own company. It sped up from then. Passengers were a lot happier with the new Class 230s, 800s and 801s and the company received a very good reputation. All the way up to 2050, GWR had won every bid for the Greater Western franhise. Stock has of course changed for the Riviera Line, GWR now operate Class 801s on all sections of the Riviera for Express/IC services and Class 365s operate the local servies as well as the rare sight of the Class 387/1 or /3 also running on a local service. GWR also operate the Night Riviera which sees a rake of refurbished MK3 sleepers, MK3 DVT and a Class 92 for traction. The formations run typically with the DVT towards Penzance.

Virgin Trains Cross Country
It took some time, but as of 4th May 2032, Virgin have finally won back the Cross Country fanchise. National Express won the franchise for a short period from 2018 to 2021 where Arriva took over again. That went on until 2027 and an extension to 2032 was awarded. When the franchise was open for biding, Virgin Trains and Stagecoach were clear winners from the start. They have been operating the Cross Country franchise under the TOC name "Virgin Trains Cross Country" since 2032 and have been doing quite well. VTXC use only one type of train on the Riviera Line, that train is the Class 390 Pendolino. The Class 220 and 221s that formerly operated the route new run on the North Wales Coast, which in 2050, is still a diesel railway.

Direct Railfreight Services
As stated before, in 2019 was the fall of the First Group. This also brought down GB Railfreight. It was quite a few years before they made a reappearance. The former CEO and managers of GB Railfreight were approached by Direct Rail Service on 25th April 2024 and in 2 years, the two companies merged creating "Direct Railfreight Services". The company uses a range of rolling stock from the Class 66 to the 68. The Class 92 is also a common sight along the Riviera Line but less frequent as the diesels due to an act in 2034 stopping all future electrification of freight terminals as the OHLE was far too dangerous for the safety of workers.

Stations
The year 2024 saw the demolition of the dissused platforms Kingskerswell well station.

NOTE: The story is just for a bit of fun. You don't have to go along with it. Perfectly fine for you to make up your own futuristic fantisy.
Key Features
*When a train passes a signal, the signal does not change to red straight away. However in Train Simulator, they will change as soon as the cab at the front has passed, which is unrealistic. The signals on this route will now have a delay to when they change from green/double yellow/yellow/white, to red. As per reality.

However, if you wanna give it a go yourself, it really isn't that difficult. There's a few things to learn but this tutorial should get you going should you wish to learn. :) https://www.youtube.com/watch?v=OwCGrS8yOU4

Pizzaguy Aug 8 @ 10:17am
Would you be interested in electrifying a USA route? As you can imagine, there is not a lot in terms of electrified american routes. If you are interested, I would love if you could electrify Sherman hill. The concept makes sense to me; its a steep route with little curves which would make fast electric freight service ideal. Of course, no pressure because I know how much effort you have to put into the projects you do.

Cyclone Apr 21, 2021 @ 2:05pm
Understandable. As I said, the best way to test what a patch would do would be to run scenarios on his version, perhaps. I know Railfan did an entire series here (Exeter to Paignton Series 4), so that is a good place to find testing material.

Joethefish  [author] Apr 21, 2021 @ 11:25am
Not sure a patch would work well on the workshop. I am happy for him to do what he wants with the project. It's an old project by my current standards anyway.

Cyclone Apr 21, 2021 @ 3:49am
I have noticed the upload from graham and at first thought it was blatant plagiarism. I then noticed the comments here. Can I make a recommendation, since the route is obviously final (scenarios are on the Workshop), that you create a sort of a patch file to provide as an official update to this route instead of him making a unique post? That way, people can download your route and update it all under the same route ID instead of having a unique entry for new speed limits and signals. It means scenarios, which should be tested before a patch is done, can be confirmed to work on his version and continue to work on the updated route.