Store Page
Space Engineers >  Workshop > [Omega]'s Workshop
This item has been removed from the community because it violates Steam Community & Content Guidelines. It is only visible to you. If you believe your item has been removed by mistake, please contact Steam Support.
This item is incompatible with Space Engineers. Please see the instructions page for reasons why this item might not work within Space Engineers.
Current visibility: Hidden
This item will only be visible to you, admins, and anyone marked as a creator.
Current visibility: Friends-only
This item will only be visible in searches to you, your friends, and admins. 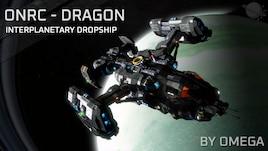 Space Engineers - Sparks of the Future
Created by

See all 76 collections created by [Omega] and other people (some may be hidden)
You need DLC to use this item.

This item has been added to your Subscriptions. Some games will require you to relaunch them before the item will be downloaded.
In 1 collection by [Omega]
Olympus: Naval Retrofits and Construction


WARNING: Contains an obscene amount of subgrids with no regard for survivability, be aware.

"A design that has transcended systems, the IDS-4 'Dragon' serves the ONRC and its citizens as its predecessors have for generations, delivering supplies and troops to all environments known to man, be they the depths of Trelan, or the peaks of Helghan. The Dragon is a beloved staple of the system mainly due to its role in the great exodus. The original IDS-1 variants helped evacuate thousands, many of whom were the ancestors of todays populous. As a result, even when better, more modern alternatives are still available, the marines would take the Dragon over that ship any day. Whilst each day, fewer and fewer of these behemoths remain to protect the skies, those that do grow stronger from it, adapting to each challenge, and learning from past mistakes. The Dragon's power is not in its size, but the versatility that size can allow for. Whilst smaller ships are far faster and more nimble, they do not have the margin to adapt that our prized drop-ship can offer."

The 'Dragon' features 2 Rocket Launchers, 2 Autocannons, 2 Gatling and 1 Autocannon Turret for weaponry. 1 large hydrogen tank with two large H2 thrusters are present with 10.8 minutes at full thrust. A vast array of Atmospheric and Ion thrusters complement this as the primary movement method. The dropships interior features capacity for 1 pilot, 1 gunner, as well as 10 passengers, and is fully airtight and pressurized via 2 O2/H2 generators.

Powering the ship are 2 Small reactors, 8 Large batteries and 67 small batteries (yeah) giving a flight time of around 30 minutes in atmosphere with connection ports in the Top, Bottom and Rear of the ship for external re-arm and recharging.

The VTOL function of the Dragon allows an additional 2 Large Ions, and 1 Large Atmospheric for two opposite sides to be rotated for better movement in the desired direction (Forwards/Backwards vs Up/Down), the feature also changes the lighting from red to green when activated so marines know when the dropship is safe to exit.

The Dragon has been classified as a dropship mainly due to its interplanetary capabilities and large troop capacity above all else. In a one on one against another small ship, it is unlikely that it has the necessary armament or turning speed to defeat it, however it excels at cargo hauling and has high calibre weapons that could easily allow it to act as air support for ground forces.

For these reasons, it made the most sense to me, that rather than class it as a gunship (where it would be under armoured and slow compared to other designs) it would make far better sense to have it remain as a higher tier dropship that could do its job to a good standard. For it to even be considered a gunship by my standards, I believe it would take far too much effort and potentially ruin the overall aesthetic for the sake of extra thrust, weapons etc.

This is quite possibly the hardest ship I have ever had to build. The number of subgrids it has attached meant I had to spend hours running trial end error trying to figure out the best way for it not to rotate into the ground at mach 10. The result is what you have here. I wish I could get the ship to turn faster, however doing so would require more gyroscopes which would further weigh the ship down.

The only reason that this ship is possible at all is because of Whiplash141's awesome scripts, that allow the ship to turn and move, I would like to give a massive thanks to him for taking the time to create them. If you enjoyed this workshop item, please leave a like or comment below, it means a lot to see what you guys think of my creations and helps motivate me to publish more ships.

As always, thank you, Omega

Forzel Jun 17 @ 3:05pm
Man this is amazing 👏 I would love to see your version of the Cutlass Black from Star Citizen. Nice job !

StRaven May 20 @ 7:25am
This is stunning, some love and dedication to design, flies well to. Great ship!

JD.Horx May 10 @ 2:38pm
This thing is so rad, I wish I had built it, really envious, congratulations on this build.

[Omega]  [author] May 8 @ 10:37am
Thanks! I'm afraid it would be very difficult to build in survival due to the number of subgrids. However I may release a single grid version for that purpose at some point.
< >