Store Page
Space Engineers>  Workshop > shard's Workshop
This item has been removed from the community because it violates Steam Community & Content Guidelines. It is only visible to you. If you believe your item has been removed by mistake, please contact Steam Support.
This item is incompatible with Space Engineers. Please see the instructions page for reasons why this item might not work within Space Engineers.
Current visibility: Hidden
This item will only be visible to you, admins, and anyone marked as a creator.
Current visibility: Friends-only
This item will only be visible in searches to you, your friends, and admins. 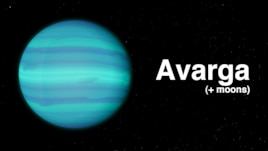 This item has been added to your Subscriptions. Some games will require you to relaunch them before the item will be downloaded.
In 2 collections by shard
Shard's Planets & Skyboxes

5 items
Description
Avarga
Avarga is an Ice Giant notable for its vivid blue-green bands of clouds, and its decent mass has allowed it to have a unique and modest system of moons. With a surface gravity of 1.9g, any ship found caught in its gravity well must escape before the gravity becomes too strong and finds itself unable to do so.

Moons
Bek
Pushing the limit of what can be considered a moon, Bek is a captured asteroid situated close to Avarga. While making the journey to it is difficult due to its proximity to Avarga's gravity well, the trip is rewarded by its own low gravity and the presence of Uranium along with other resources.

Sar
Avarga's second and largest moon, Sar could be considered a planet if it was on its own. Its plentiful resources have made it an important asset and its cratered surface has made it great for developing and testing ground vehicles. Despite being rather large, only a tenuous atmosphere is present.

Dund
Even though it's the smallest of Avarga's moons that isn't a giant asteroid, Dund has a moderately thick atmosphere that just barely covers the tops of its highest peaks. While its extremely hostile terrain and equally hostile wildlife make Dund appear to be a place to steer clear from, Magnesium is common just underneath its surface making it a destination for anyone thinking about weapons.

Tomor
Avarga's farthest moon, Tomor is decently sized and perhaps the friendliest of its parent's moons. Despite having a rather barren surface, Tomor's thick, hazy, oxygenated atmosphere and wealth of basic resources make it a great place to start.

Notes
Due to SE having a maximum vanilla planet size of 120km, to get Avarga at its intended size you will need to simply download the survival world I made that contains it, or use SEToolbox. One issue present is that Avarga won't obscure light from the sun behind it, this is a problem with how light interacts with planets in SE and one I unfortunately can't fix.

All moons use custom voxels that do not override any vanilla ones.
< >
52 Comments

The_Yrri Apr 29 @ 2:53pm
I've loaded the mod into a DS and it seems Bek and Tomor have some issues - jetpacks work weirdly there, barely able to lift the player, plus there's a bunch of errors being thrown into the log.
Would you, @Shard, be interested to work these kinks out?

shard  [author] Feb 19, 2021 @ 11:33pm
Ah, I see. You can't just have an atmosphere without a surface so you'd have to make a new planet with a very high atmosphere. I don't think you would be able to get it high enough for the surface to be the core of a gas dwarf as it also scales with radius.

DontFollowOrders Feb 19, 2021 @ 11:30pm
I have an idea based on hypothetical gas dwarf planets to place Bek at the exact coordinates of the center of Avarga so that there can be an extremely deep atmosphere leading down to the surface, which could also be resized to simulate if gas planet were to heat up or cool down significantly, without affecting features on the surface of Bek. It's theorized that these planets could be anywhere from 1.9-3.4 or whatever Earth masses and would be hard pressed to not be classified as an ocean planet, so I could even go hyper real and give it a very deep ocean with water mod too

I'm also really curious to see if the gravity multiplies, but there's all this stone in my way!

DontFollowOrders Feb 19, 2021 @ 11:08pm
Any way to remove the flat, empty surface of Avarga so I can put Bek inside it instead?