Store Page
XCOM 2>  Workshop > GiuseppeIII's Workshop
This item has been removed from the community because it violates Steam Community & Content Guidelines. It is only visible to you. If you believe your item has been removed by mistake, please contact Steam Support.
This item is incompatible with XCOM 2. Please see the instructions page for reasons why this item might not work within XCOM 2.
Current visibility: Hidden
This item will only be visible to you, admins, and anyone marked as a creator.
Current visibility: Friends-only
This item will only be visible in searches to you, your friends, and admins. 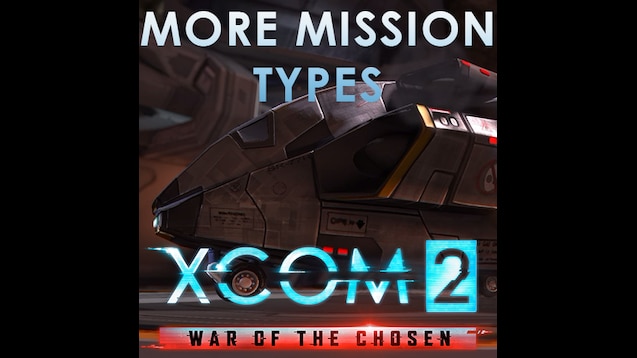 GiuseppeIII
Last Online 6 hrs, 15 mins ago
See all 573 collections (some may be hidden)
You need DLC to use this item.

This item has been added to your Subscriptions. Some games will require you to relaunch them before the item will be downloaded.
Description
-- Full credit for mod goes to Coyotekins (Fireborn) --

FEATURES
This mod adds in a total of 8 new mission types to offer exciting new challenges and increase gameplay variety!

The mission types are as follows:

Skyranger Down: On the way to the objective the skyranger is shot down. This can result in a variety of intense missions that you will have to get through.

--Skyranger Down Dark Event: Also included is a new dark event 'Skyranger Down' which increases the chances of the skyranger being shot down and this tough mission type showing up.

Gateway Battle: You are defending a resistance base against an onslaught of ADVENT forces. Over time both ADVENT and resistance forces will reinforce both teams positions until one side is victorious.

Outpost Distress Beacon: A resistance outpost has sent out a distress signal. It is up to you to find this outpost which can start a range of various events.

Advent Activity: It is up to you to wipe out an ADVENT force. This time however, you are tactically situated where you can take all the time in the world to fulfill your objective.

Resistance Support: A group of resistance soldiers needs your help. Assist them by killing enemies, firing upon ADVENT troops, and drawing fire away from them.

Convoy Escort: A resistance group has been able to capture an ADVENT tank, but needs help delivering it back to their base. You are requested to help guide the tank while defending against ADVENT troops.

Resistance Fortress: A major resistance base is under assault. It is your objective to defend the base from waves of reinforcing enemies.

Covert Ops Ambush Variant: Instead of traversing across the map, you can now also be required to hold your position for a set amount of time.

Along with the new mission types, this mod adds in a new hack reward and item to help make getting through these missions a little easier!

Reinforcements: For 400 supplies you can purchase a new resistance beacon which will call down a group of ai controlled soldiers to assist you. Additionally there is a new hack reward which can call friendly resistance soldiers to help you complete your objectives! All of these new soldiers come with a new and improved AI system which is also compatible with the range of other AI mods out there!

COMPATIBILITY AND KNOWN ISSUES
There are have been reports of crashing while using Quick Soldier Info with the Enable Tactical Photo setting on.

If playing with the lost and abandoned story mission enabled, the game could also crash on the global map at the start of the campaign.

ALTERNATE DOWNLOAD
You can also find this mod over at the nexus here[www.nexusmods.com]. Regardless of where you decide to download, make sure to go over to the nexus to give Coyotekins (Fireborn) kudos for creating this mod and any feedback you may have!

UPDATE LOG
8/4/2019: Attempt to fix Convoy Escort tank pathing issues. This should hopefully resolve any problems with the tank getting stuck on this mission. If you do still have problems with this mission on a new game, with a cleaned out config folder, and are positive you are updated to the latest version of the mod, post your issue over at the nexus here[www.nexusmods.com].

GargakOfTheEast Jan 13 @ 4:34pm
The tank mission is bugged, and it cost me a campaign. Do not use.

Carlton BEaEnkEs, no E Jan 13 @ 1:49pm
It seems like Fireborn has a tendency to make mods and then abandon them as soon as people start reporting bugs.

The Captain Jan 4 @ 11:56pm
Anyone find out how to edit the beacon that calls down reinforcements?

Slane117 Jan 4 @ 11:24pm
When on the resistance support missions (you know the one where you distract advent along side a resistance squad from going after a resistance base) There are no resistance anywhere, just one unit outside the map which is a VIP. Is this a bug or a conflict? I do have the Militia Overhaul Plus mod

Blaze Dec 31, 2019 @ 9:49am
Hmm, is there a way to manually disable the convoy mission type? I'm also getting errors with the Tank not moving, which is kinda annoying; everything else seems to work beautifully though!

Flik the Changeling Dec 22, 2019 @ 3:58pm
Tank missions are broken for me. Tank stands next to objective and is not moving. so its lose even if I kil everyone on map