Store Page
Arma 3 >  Workshop > Lexx's Workshop
This item has been removed from the community because it violates Steam Community & Content Guidelines. It is only visible to you. If you believe your item has been removed by mistake, please contact Steam Support.
This item is incompatible with Arma 3. Please see the instructions page for reasons why this item might not work within Arma 3.
Current visibility: Hidden
This item will only be visible to you, admins, and anyone marked as a creator.
Current visibility: Friends-only
This item will only be visible in searches to you, your friends, and admins. 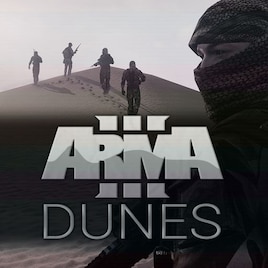 Lexx
Offline
See all 493 collections (some may be hidden)

This item has been added to your Subscriptions. Some games will require you to relaunch them before the item will be downloaded.
Description
Years before the "East Wind" crisis, a small group of CTRG operators make their way through the dunes of North Africa to collect tangible information on CSAT's secret weapons project.

This project has been made within the scope of 7 days.
(Well, almost. Issues with the voice over production sadly resulted in a delayed release.)

Dunes is also my very first terrain in this engine. I've started experimenting with map creation about one or so weeks prior, to learn more about its creation process. After a couple initial hiccups, it started to shape up quite nice, though, which then sparked the plan to not just throw it on the workshop and be done with it, but to turn it into something better... and bigger.

Keep in mind that at the end of the day, this is still nothing but a small project which I have used to test heightmaps, textures, clutter, and everything else related to map making. Thanks!

Download & Installation
Subscribe to the addon in the Steam Workshop, then activate the addon with the ArmA3 Launcher. Once done, start the scenario from the “Campaigns” menu or load the terrain in 3den.

Mods
Dunes doesn’t require any mods to run. Any gameplay changing mods should be disabled while playing the campaign, as these can cause negative side effects.

Other Releases
If you haven't yet, then check out the CSAT themed mini-campaign Callsign Minotaur. Thanks!

If you like this project, please don't mind rating it & consider dropping a donation or two:

Patpat Oct 26 @ 1:16pm
Nice but a bit too hard for my liking especially the 2nd mission that is bugged too.

calculuswhiz Jul 26 @ 7:49pm
Had a strange issue. I shot down the helicopter and all the AA guys in part 2, but the mission wouldn't end. Then I drove back to the base to see if I forgot to destroy the truck or something. After I drove back, two new guys spawned around the static AA. After defeating them, then I won. Other than that, I had no breaking issues. Fun mission.
Not sure what the trigger is for failing the UAV part. If it's just timing, then I think maybe it could be a little more lenient. Otherwise, if it's detection, then I can accept that it's my fault for flying too low.

mkalireza Dec 19, 2021 @ 2:40am
Hi, I really liked this Scenario. And Western Sahara Creator DLC is absolutely great. Thanks man.

Butcher Nov 23, 2021 @ 8:55am
second mission bugged, if i try to shoot helicopter from Tital launcher (not static version) - final script will broke