Store Page
Sid Meier's Civilization VI>  Workshop > Collections > JNR's Workshop
This item has been removed from the community because it violates Steam Community & Content Guidelines. It is only visible to you. If you believe your item has been removed by mistake, please contact Steam Support.
This item is incompatible with Sid Meier's Civilization VI. Please see the instructions page for reasons why this item might not work within Sid Meier's Civilization VI.
Current visibility: Hidden
This item will only be visible to you, admins, and anyone marked as a creator.
Current visibility: Friends-only
This item will only be visible in searches to you, your friends, and admins.
Description Discussions2 Comments38 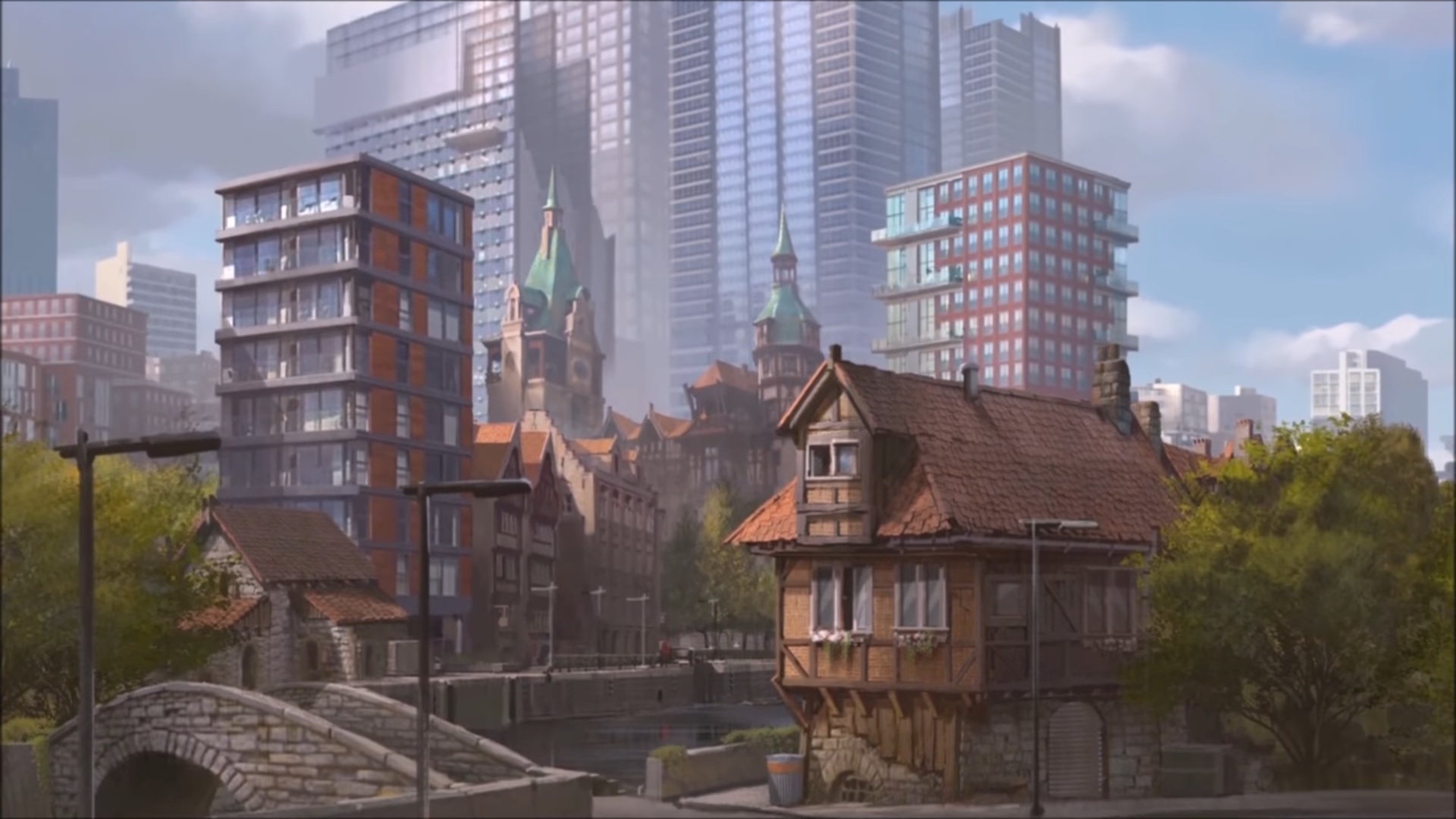 A collection of 21 items created by

With Urban Complexity mods, choosing what to build is no longer just a chore where you tick items of a set build order. Instead, proper consideration of your local environment and factors such as adjacencies, available terrain, other districts present in the city, etc. shall pay off greatly. Tall cities where every building choice was made carefully will be more competitive and a viable alternative to carpeting the lands with minimally developed settlements. 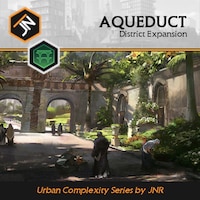 New buildings for the Aqueduct, which is renamed to "Cistern" (The Roman Bath is now named "Aqueduct" instead). Adds a total of 3 new buildings as well as the Sewer, which is reworked, stretching over 2 tiers.

The new bonuses provide each city with a mu...

New faith-focused building choices for the Holy Site. Adds a total of 4 new buildings and reworks the existing buildings as well, now stretching over 4 (!) tiers instead of 3.

The new bonuses provide each city with a multitude of ways to earn Faith.

New culture-focused building choices for the Theater Square, which is renamed to "Civic Square". Adds a total of 6 new buildings and reworks the existing buildings as well, now stretching over 4 (!) tiers instead of 3, not counting Museums which are now se...

New science-focused building choices for Campus. Adds a total of 5 new buildings and reworks the existing Campus buildings as well, now stretching over 4 (!) tiers instead of 3.

The new bonuses provide each city with a multitude of ways to earn Science....

New commerce-focused building choices for Commercial Hub, Harbor, and Aerodrome, many of them with new 3D models and icons! Adds a total of 12 new buildings and reworks the existing buildings in these districts.

The new bonuses provide each city with a ...

New military-focused building choices for Encampment, Harbor, and Aerodrome. Adds a total of 5 new buildings and reworks the existing buildings in the Encampment and Aerodrome as well as the military-related bonuses of the Shipyard and Seaport.

New features and buildings for the Government Plaza district. The new Tier 4 buildings now provide legacy policy cards for the future era governments but also have powerful bonuses on their own. Earlier buildings in the district received small bonuses to h... 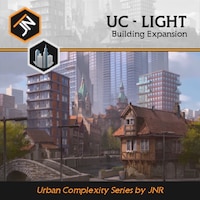 This mod makes basic district buildings more interesting by adding a unique twist on how they grant their yield, but without adding new building choices like the "full" District Expansions. Some buildings will give yield based on population, others a perce... 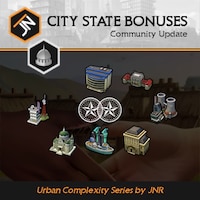 The Ethiopia Pack DLC has once again changed how city state bonuses work, integrating many ideas from existing mods. This mod brings those changes to all game versions (with the exception of the Diplomatic Quarter, of course).

Availabe in all lan... 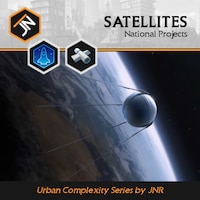 Your civilization can into space but there's nothing interesting? Launch satellites that do more than just advance the science victory! This mod adds eight new projects in the Spaceport which offer a broad variety of empire-wide bonuses. Spy on your enemie... 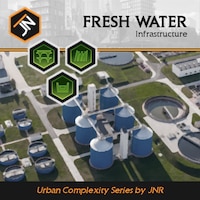 All water works districts (Aqueducts, Dams, Canals) provide fresh water if they are adjacent to the city center and have access to fresh water themselves. Aqueducts provide extra housing based on Appeal (just like Neighborhoods) when you have the Urbanizat... 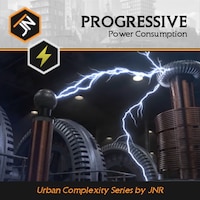 Power Up! - Progressive Power Consumption overhauls everything around Power. Providing electricity to your cities will be a lot more important, but the rewards will be bigger as well. Power requirements start slightly lower than usual but increase as you p... 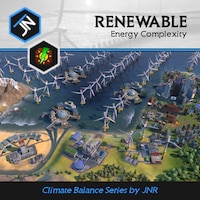 Renewable Energy Complexity makes everything about renewable energy in the late eras more engaging and rewarding. Receive more green electricity with smart placement of improvements and transfer that green electricity to other cities (or even other civiliz... 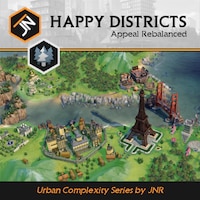 Happy Districts gives or takes amenities in cities based on the Appeal of its districts. A healthy worker is a happy worker. Your people will appreciate it if you let them live and work in a beautiful environment. Also, Appeal changes from features are rew... 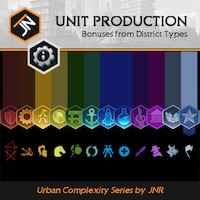 Unique districts provide a +20% production bonus to a particular unit type. Each district boosts the production of one or two unique types. This gives your districts more flavor and provides incentives beyond standard build orders to specialize cities in u... 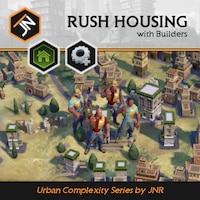 Builders can use their charges to speed up the construction of Aqueducts and Neighborhoods. Use the productivity of your large cities to boost the growth of new towns. 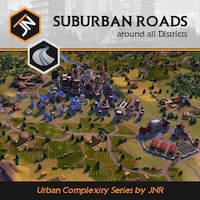 Automaticlly builds roads around districts. For those who feel it's wrong that roads got oursourced to merchants and wonder how citizens who walk to work every day do not leave any trail.

Roads are automatically built around city centers and spec... 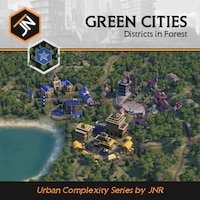 Allows building districts on Forests. Beautiful cities with trees among them.

No more waiting for Mining to finish because there is a forest in your desired district spot - instead build it right away. Build attractive neighborhoods right inside the lus... 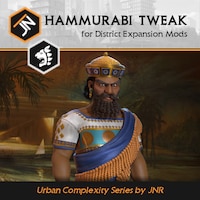 Hammurabi's ability no longer grants free buildings but will now always grant an Envoy when building any district for the first time and provide a 25% Production bonus towards level 1 buildings.

This change is designed to be used together with Urban Com...

New production-focused building choices for the Industrial Zone. Adds a total of 4 new buildings and reworks the existing buildings as well, now stretching over 4 (!) tiers instead of 3. Further 6 buildings in a new tier are added with the Corporations mod...

Would you ever consider [...]
Megalodong