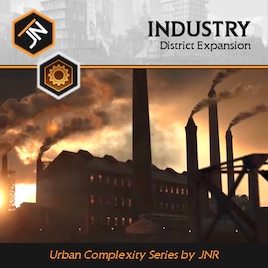 JNR
Online
See all 1343 collections created by JNR and other people (some may be hidden)
You need DLC to use this item.

This item has been added to your Subscriptions. Some games will require you to relaunch them before the item will be downloaded.
In 3 collections by JNR
JNR's Urban Complexity

111 items
Description
New production-focused building choices for the Industrial Zone. Adds a total of 4 new buildings and reworks the existing buildings as well, now stretching over 4 (!) tiers instead of 3. Further 6 buildings in a new tier are added with the Corporations mode active.

The new bonuses provide each city with a multitude of ways to earn Production, using both population and geography.

Credit to Merrick for helping out with the Wind Mill model.

Extra buildings with Corporations mode active:
IMPORTANT WARNING: For now, I added 36 objects for each product. The project will remain available if they have all been produced, but no more products will be generated. Likewise, if you finish the project but do not have an available product slot in any city, the created product will be lost immediately and permanently .

Compatibility and Recommendations
Requires Gathering Storm and Rise & Fall to download (because art assets from both are used), but Rise & Fall is not required to be active to play with the mod. Other DLC supported but not required.

This mod is compatible with JFD's Rule with Faith, P0kiehl's Civilizations Expanded, and CIVITAS' City States Expanded (CSE). The new buildings will receive the respective bonuses.

Compatible with all my other mods (including the Dojo).

If you want tier 4 buildings to receive bonuses from city states, you need CSE and activate the Ethiopia-style city state bonuses of that mod (via game mode option).

Compatible with any Specialists mod.

This mod is of course not compatible with other mods fundamentally changing the Industrial Zone.

neomoore122333 May 15 @ 1:09pm
So, does this mod mean that you can't build industrial zones on tiles without a river or hill if you want to go down the building path?

LongBoi Mar 8 @ 5:31am
does this make changes to hansas for germany?

Doomed World Mar 4 @ 9:05pm
so wait does windmill just give you one bonus production? What does it get the standard adjacency from?

H.Humpel Jan 26 @ 2:35pm
Hi JNR,
your mod has been translated into German by Junky and the translation is now part of the Civilization VI Mods - German translations mod pack.
We would be more than happy if you could refer to the language translation in your mod description.

Junky Jan 22 @ 3:42am
Hi JNR, while I was translating your mod I realized that you did change the the power plant descriptions but not the descriptions of their related converting projects. Just wanted to inform you.

Dear JNR, thank you for your mod.
All your District Expansion mods were translated into russian.
It would be great if you could post a link to the Russian translation of the mod on the page of your mod.
And then even more players will be able to appreciate the beauty and features of your mod.

Limfjorden Dec 29, 2021 @ 6:47am
Is this mod Compatible with Sukritact's Egypt Rework? I'm asking since it adds an industrial zone replacement.

marm7211 Dec 9, 2021 @ 4:21pm
Is it only me, or do the district expansion mods no longer work after he updated them? (in case Im the only on having the problem, does anyone know any possible causes or solutions? I left a game halfway through, and now all of my empire is missing a good portion of its district infrastructure after the mods were updated, they worked perfectly before the update. None of the modded buildings show up, I cant build them, and neither can I find them in the civilopedia. In the game pause menu, in the section listing all the active mods the entirety of the district expansion mods appears to be active, please help)
< >