Store Page
XCOM 2>  Workshop > Zero's Workshop
This item has been removed from the community because it violates Steam Community & Content Guidelines. It is only visible to you. If you believe your item has been removed by mistake, please contact Steam Support.
This item is incompatible with XCOM 2. Please see the instructions page for reasons why this item might not work within XCOM 2.
Current visibility: Hidden
This item will only be visible to you, admins, and anyone marked as a creator.
Current visibility: Friends-only
This item will only be visible in searches to you, your friends, and admins. 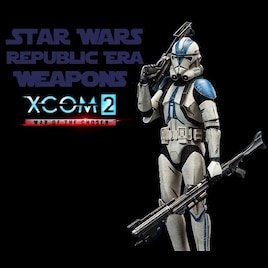 Zero
Offline
See all 1975 collections (some may be hidden)
You need DLC to use this item.

This item has been added to your Subscriptions. Some games will require you to relaunch them before the item will be downloaded.
Description
"Nothing deadlier than a clone behind the trigger."


This mod adds some Republic Era Weapons to the world of XCom 2 WOTC.

Current Known Issues:
- Apparently there have been some people saying they don't have the conventional tier weapons - i have bug tested myself and it seems to be fine. If there is an issues, you will need to get to magnetic tier to unlock.


Credits/Thanks to:
A Box of Turtle Flesh for the rigging and porting.
TheTommyTrials for bug testing

Also big thanks to Musashi and Iridar for helping me fix up the sounds to be compatible with their mods.

The assets used here originated from the upcoming Battlefront 2 games, All assets belongs to EA and Star Wars is rightfully owned by Disney. The assets here are for non-commercial uses. No payment or donations will be accepted.
Popular Discussions View All (1)

KlMOCHI Apr 28 @ 4:23pm
jackgamer447 - Try buying the Magnetic Rifle Upgrade (Vanilla Game Upgrade) instead of the the individual mod rifle upgrade. Once i bought the vanilla upgrade all the other Clone Weapons instantly received the rifle upgrade (a bit unbalanced but im not complaining) - see if that works

SmilingAssassin27 Apr 15 @ 4:24pm
Any chance you could replaces grenades with thermal detonators and also add some Republic era melee weapons? (Not lightsabers) Like the vibroblade and Stun batons?

{TSR} [GA B]Sgt.Survivor Mar 16 @ 10:47am
Im at the magnetic tier, and i see no star wars weapons, nor a conventional tier weapon upgrade, research etc

Eflow Feb 16 @ 8:58pm
Is there any chance you could turn frag grenades to Thermal Detonators?

Metal Gear Mando Feb 16 @ 8:25am
Does this mod not work for anyone else? I can never get my squad to use the weapons.

mike3640 Jan 1 @ 11:23am
The weapons all have upgrades for me but the DC-17 blaster does not? Anyway to fix this on my end? I'm using secondary as primary for akimbo class

jpsweeney94 Sep 22, 2019 @ 11:20pm
Anyway to get this working with "Grimy's Loot Mod WOTC" instead of giving vanilla weapons from the lock boxes?