Store Page
Unturned>  Workshop > Vilespring's Workshop
This item has been removed from the community because it violates Steam Community & Content Guidelines. It is only visible to you. If you believe your item has been removed by mistake, please contact Steam Support.
This item is incompatible with Unturned. Please see the instructions page for reasons why this item might not work within Unturned.
Current visibility: Hidden
This item will only be visible to you, admins, and anyone marked as a creator.
Current visibility: Friends-only
This item will only be visible in searches to you, your friends, and admins. 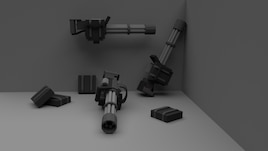 Vilespring
Online
See all 1164 collections (some may be hidden)

This item has been added to your Subscriptions. Some games will require you to relaunch them before the item will be downloaded.
Description
The Negotiator Minigun, an electrically driven rotary cannon capable of firing at 1,500 rounds per minute.
Check out the Negotiator's big brother, the Dominator!

Based off the M134D, the Negotiator provides a Military alternative to the Hell's Fury, but with a few key differences.

1. It fires Military ammunition.
2. It can fire a full box without going to 0%
3. It does less damage per shot (But makes up the lower damage with a higher ROF)
4. It is 2x5, not 3x5. It bugged me how you cannot put the Hell's Fury into a rifle rack nor a sentry turret.
5. More focused on anti-personal than raiding or anti-vehicle.
6. More ammo types.

The Negotiator has 4 ammo types at its disposal:

The Negotiator comes in parts, and has a low chance of being found fully assembled. The Negotiator's ammo boxes and parts can be found in airdrops and Horde Beacon loot.

The Negotiator has four components: Barrels, Chassis, Mechanisms, and Electrical. With all four parts and Engineer III, you can assemble a Negotiator Minigun, and it comes with a free ammo box! (No free ammo, sorry)

All boxes except for the fragmentation can be refilled with Military Low caliber ammunition.

And of course, it features custom animations. Zubek animations would not cut it for a gun like this.

Balance
A weapon like this does produce some concerns about balance, and such concerns are well justified.

It's hard as hell to get. The chance of getting a Negotiator related item (part or ammo) is as probable as a Hell's Fury.

It does have a high firerate, yes, but it has low damage. With only 32 base player damage and only 1 structure damage per shot, the Negotiator is a horrible raiding gun. The Negotiator would be a silly weapon to use if ammo stores are low. Due to the nature of the gun, most shots will miss, so this is to be used if ammunition is not a problem.

The Fragmentation rounds are silly rare and don't boost the performance of the Negotiator that much. They're more novelty than anything.

The Blood Dragon has an extremely low spawn chance and it chews through ammo so incredibly fast. It does have 1600 DPS though....

Copyright 2019. This item is not authorized for posting on Steam, except under the Steam account named Vilespring.
Popular Discussions View All (3)

harrisonbr9 Nov 30, 2020 @ 1:56pm
Or a titanium barrel that increases durability and accuracy, but diminishes the damage.