Store Page
Conan Exiles >  Workshop > Crystal's Workshop
This item has been removed from the community because it violates Steam Community & Content Guidelines. It is only visible to you. If you believe your item has been removed by mistake, please contact Steam Support.
This item is incompatible with Conan Exiles. Please see the instructions page for reasons why this item might not work within Conan Exiles.
Current visibility: Hidden
This item will only be visible to you, admins, and anyone marked as a creator.
Current visibility: Friends-only
This item will only be visible in searches to you, your friends, and admins. 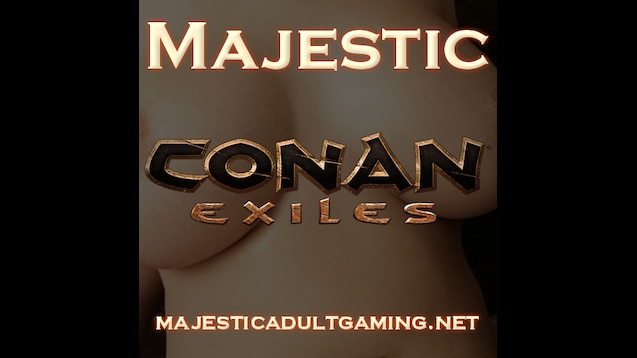 This item has been added to your Subscriptions. Some games will require you to relaunch them before the item will be downloaded.
In 1 collection by Crystal
Majestic Server Mods

Here is a quick overview of what this mod does. Keep in mind I update this whenever I feel like it and may not necessarily keep this list fully up to date.

General
- Females are shaved.
- Players can level past 60. The additional levels require massive amounts of XP and only award additional attribute and feat points. The intention here is to provide a sense of endless progression beyond end game.

Chat
- Chat system replaced with a custom one. Behaves similar to vanilla but with some usability tweaks.
- Additional tabs for clan and local chat to filter messages from other sources.
- Characters can shout. This works like local chat but with a larger range.

Nonplayer Characters
- NPC spawns are more often female than male.
- Increased maximum male genital and female breast sizes for NPCs and increased the chance they will spawn with them larger.
- Thralls can be placed much closer together.

Items and Equipment
- Outfits can be saved from the inventory screen and quickly switched to later using a radial menu.
- Armor can be hidden from the inventory screen, making you always appear nude. Alternatively, you can hide only your helmet. This also works for thralls.
- New dye: Bright white. Available alongside white and black dyes from named purge alchemists.
- New item: glamor potion. This potion allows you to tweak your character's appearance attributes that you selected when creating your character. SPOILER: The recipe is hidden on a piece of paper on the ground on the upper level of The Sinkhole. The Siptah location is somewhere in grid D9.

UI
- Current time of day and ambient temperature are visible at the top of the screen.
- Chat window remains visible behind the inventory/crafting screen.
- Activating the vanity camera (default 'V') now only partially hides the HUD, leaving character status and chat visible.

These changes are also complimented by server settings. Settings information can be found on the website.

Do not ask me to make separate mods with limited feature sets. I only do this in support of my server and community and do not have the time to maintain several mods.
Popular Discussions View All (3)

Muddy Jun 9 @ 4:04pm
Hey, I love the mod and I'm happy to see it updated for the current version of Conan. I was just wondering if there is a tool to use to edit the maximum breast size. I understand that it's your preference which is totally cool, but to me it is just slightly immersive breaking to see breasts that are bigger then the npcs head. I'm not asking you to change anything about your mod just wondering if I can do some edits myself. Thanks :)

Darmeris May 20 @ 8:33pm
Love your mod and your server, me and my friend have for years. Thanks for making it. Wish I was able to join the server, doesn't seem to work on my end.

Dread Apr 29 @ 2:05pm
some of the mod's I have on just didn't work out so well with it such as resource pulling and pickup mods for certain structures and my lvl 350 mod was overridden by this mod so I had to remove it

chris237 Mar 14 @ 9:02am
I tried to connect to the server in all the ways listed on the website. Yes, I know the password. This server simply does not exist and cannot be connected. Maybe that's why not a single person is on it.

Aeden Mar 13 @ 1:47pm
I still say this is one of the best QoL mods available, an update would be very appreciated when you have the time and desire.

Sushii Mar 13 @ 8:40am
And yet both of you are looking at it even though by the picture you can clearly see this isnt a mod for people with sensitive eyes. Dont act like you are better than the rest of the people using this mod.