Store Page
Conan Exiles>  Workshop > sidewalksurferXX's Workshop
This item has been removed from the community because it violates Steam Community & Content Guidelines. It is only visible to you. If you believe your item has been removed by mistake, please contact Steam Support.
This item is incompatible with Conan Exiles. Please see the instructions page for reasons why this item might not work within Conan Exiles.
Current visibility: Hidden
This item will only be visible to you, admins, and anyone marked as a creator.
Current visibility: Friends-only
This item will only be visible in searches to you, your friends, and admins. 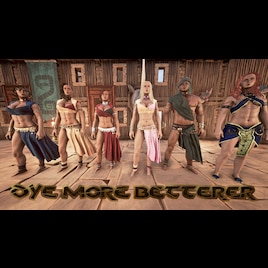 sidewalksurferXX
Online
See all 2189 collections (some may be hidden)

This item has been added to your Subscriptions. Some games will require you to relaunch them before the item will be downloaded.
Description
This mod adds 40 new dyes and counting!

I am very open to suggetions and requests for new colors.

Are you waiting for the server you play on to update DMB and need a previous version? Please visit the discord.

NOTE: Any feats that cost zero points from this or any mod will not look like its unlocked until you go out of the feat menu and back in but they DO get unlocked.
They just don't look like it. this is just how the game functions.

-Ironstone Powder: an ingredient for making the metal dyes - made from putting Iron stone in the grinder.

-Adds more dye slots to some armors (in progress, only works on medium armors for now)

Planned Features:
-New dyes with special colors like chartreuse, prussian blue etc -ON GOING- will take requests/suggestions
-New Recipes and some with new materials -IN PROGRESS-
-More shades and mixtures of dyes -IN PROGRESS-
-A dye maker thrall and station

Much later features, if these are possible:
-Add ability to dye items and weapons
-Some kind of paint system for effects like reflective metallic or glowing etc

Servers that use this mod in 2020
sidewalksurferXX

davidwallace2007 Jul 3 @ 5:17pm
I like Malcador's idea of adding tint masks to Arena Champion based on Silent Legion. Sobek's armor could use the reptile tint masks also.

You could use some more colors. Looking at the color Wiki I found Fushia (Red, Magenta), Golden (Orange, Yellow), and a deep orange (Red, Orange). Looking for more vivid colors in the flame part of the spectrum.

Malcador, The Sigillite Jun 16 @ 1:19am
yeah, it is the armor that looks like the silent legion armor.

sidewalksurferXX  [author] Jun 15 @ 10:47pm
@zalizzar thanks for moving the post. I don't see it resisted tho. I'm going to make a new discussion called "servers using this mod in 2020"

sidewalksurferXX  [author] Jun 15 @ 10:42pm
@malcador I've been out of the loop for a while now. Which armour is that? If it's the one that looks like the silent legion then it would be easy to just copy the tint masks from one to the other with little or no changes to the masks. If it is something else then it's still possible i could draw my own masks unless the armor is from a dlc in which case, it's assets are not available for editing on the devkit. I recently repaired my computer after it took a crap on itself a few months ago

sidewalksurferXX  [author] Jun 13 @ 9:54pm
@zalizzar can you please move your post to the servers discussion?

Malcador, The Sigillite Jun 1 @ 7:39pm
Would it be possible to make the Arena champion armor dyeable as a feature of this mod? I like the look of the chest and legs for my thralls, but it being undyeable is really making it a pain to get them looking the way i want.

sidewalksurferXX  [author] May 3 @ 12:29pm
I actually did work on the zamorian armor at one point but back then my devkit stopped working when i was half done and then i somehow lost the files. however there is a mod by Teella, author of sidekicks mod that does just that which is why i didnt follow up and redo my textures.

Everything_Eva May 3 @ 4:39am
Any way to dye the Zamorian Thief armor's leather? The leather on it isn't able to be dyed and pretty large. Would it be possible to add a slot for that? And, I'm not sure about the decor, was just thinking tapestries or bedding would be cool to be able to dye. Wish funcom would add that, really.
< >