Store Page
Portal 2>  Workshop > Stratos's Workshop
This item has been removed from the community because it violates Steam Community & Content Guidelines. It is only visible to you. If you believe your item has been removed by mistake, please contact Steam Support.
This item is incompatible with Portal 2. Please see the instructions page for reasons why this item might not work within Portal 2.
Current visibility: Hidden
This item will only be visible to you, admins, and anyone marked as a creator.
Current visibility: Friends-only
This item will only be visible in searches to you, your friends, and admins. 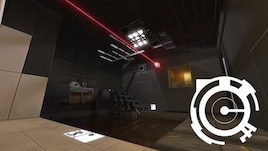 This item has been added to your Subscriptions. Some games will require you to relaunch them before the item will be downloaded.
In 2 collections by Stratos
That Laser Collection

The name of the map, Prolonged Exposure, refers to both the use of lasers and the deterioration of these otherwise pristine test chambers. The artstyle of the map is the same as of the Penrose Collection but this time around the walls are going to be opened up a little to reveal the underlying rock.

The map was originally supposed to enter in the Heavy-Duty Super-Mapping Super-Contest on ThinkingWithPortals, but under the circumstances I couln't upload it in time. So here it is now, I hope you'll like it. If you do, I reccomend you subscribe to me for more maps. :D

PS: I hope you'll forgive me for taking a break from the Penrose Collection for this one.

The thread for the map on ThinkinWithPortals can be found here:
http://forums.thinkingwithportals.com/topic7285.html

Version 1.1
- Added autosaves.
- Fixed some indicator lines and other details.
- Made the dried up goopit less deadly. (Still deadly though.)
- [Possibly] fixed my custom cube skins not showing up properly.
< >
134 Comments

les8ian Jun 9, 2018 @ 9:46am
This had some really clever puzzles (especially going into the previous chamber to get the necessary cube ) and some nice visuals to boot. It took longer than 20 minutes but it was worth playing.