Store Page
Stellaris >  Workshop > Fugasas's Workshop
This item has been removed from the community because it violates Steam Community & Content Guidelines. It is only visible to you. If you believe your item has been removed by mistake, please contact Steam Support.
This item is incompatible with Stellaris. Please see the instructions page for reasons why this item might not work within Stellaris.
Current visibility: Hidden
This item will only be visible to you, admins, and anyone marked as a creator.
Current visibility: Friends-only
This item will only be visible in searches to you, your friends, and admins. 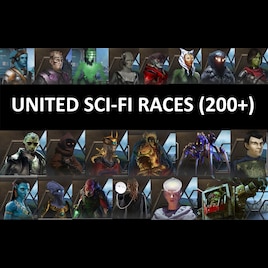 Fugasas
Offline
See all 6870 collections (some may be hidden)

This item has been added to your Subscriptions. Some games will require you to relaunch them before the item will be downloaded.
Description
This mod is an effort to combine sci-fi related races in one place. The plan is to create, combine, improve and revive portraits from all available science fiction mods specifically the ones that are no longer updated by their creators. It is an independent mod with focus mainly on portraits. Now there are 220+ races (120+ animated) and increasing. This mod as most other mods is not compatible with achievements.

There are also included name lists and planets/systems, but other modifications (prescr. empires, race traits, overhauls, predefinitions) are NOT included as my idea is to make it as universal as possible. If you need additional traits, you can get them from this awesome mod inspired by various sci-fi themes.

Current mod adds races in sections by default considered as for organic races by game, but if you want to play a custom race from this pack as robotic empire (for example, borg, geth and etc.,) subscribe following patch mod United Sci-Fi races: Robots.

Also:
Please see also what content of other mods were used for this mod in specific discussion thread. You may also suggest races from outdated mods or new race you have been looking for. No promises, but I consider each suggestion and appreciate your feedback. If You like it, please rate it :).

Naturally I cannot cover all Sci-Fi races/factions, but I will do as much possible from my side to create, animate and improve current mod content that we all could enjoy this awesome game mixed with other sci-fi themes.

Manuals:
• How to hide race you do not want to see in your game play (relevant for randomising patches)?

Candidates to be included
Fugasas

Report bugs: kill them all
Fugasas

Paul Aug 8 @ 4:57pm
The first alien in XCOM list exists in Babylon 5 too. They are called Streib.
https://youtu.be/jhC_KHkihKY

kroganwar22 Jul 6 @ 9:40am
@Fugasas Hi there. I am making a Mass Effect total conversion mod and I am wondering if I can use your Rachni portrait? I would credit you for your hard work, but no worries if you are uncomfortable giving me permission. Thank you for your time.

TheWaffleInquisition Jul 5 @ 4:38pm
Is there any chance we could get the name lists as a separate mod?

ДОЦЕНТ Jun 12 @ 7:18am
Hi all, guys. My problem is that in the new version of human portraits, the old ones are mixed up. I mean old pre-overlord humans and new ones. What am I able to do?

KubiG Jun 10 @ 1:31pm
I wanted to let you know that a lot of Fleet name lists are broken now. Everywhere where it should automatically name fleets by number - it just writes %O% Fleet instead.

YutaniWakazashi Jun 3 @ 12:15pm
I am having an issue where the game is randomly CTD when playing. It may go many in-game years without an issue, or it may happen five times in a game month.

It is either this mod or the Larger Galaxies one. But due to the extremely random nature of the crashes, I can't reliably tell which one since disabling a mod and playing doesn't tell me anything since it may be many in-game years before a crash. Especially in the beginning.

It won't come out well at all. I tested it in-game and the fleet names literally are spelled like that. I'm noticing this issue with all other outdated namelist mods by the way; something in a recent update broke all of them.

Acalian May 26 @ 2:48pm
so, i was looking at why some of the name lists show the fleets as something like: %O% Fleet
and i checked the mod and found this: