Destinations>  Workshop > Cargo Cult's Workshop
This item has been removed from the community because it violates Steam Community & Content Guidelines. It is only visible to you. If you believe your item has been removed by mistake, please contact Steam Support.
This item is incompatible with Destinations. Please see the instructions page for reasons why this item might not work within Destinations.
Current visibility: Hidden
This item will only be visible to you, admins, and anyone marked as a creator.
Current visibility: Friends-only
This item will only be visible in searches to you, your friends, and admins. 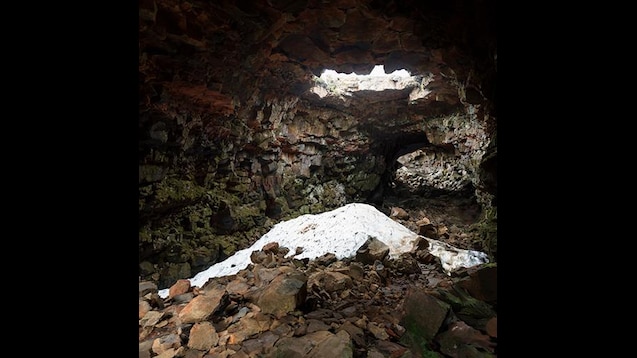 This item has been added to your Subscriptions. Some games will require you to relaunch them before the item will be downloaded.
Description
Now on SteamVR:

To the south-east of Reykjavik, underneath a desolate volcanic landscape, lies this cave - a natural conduit formed by molten lava flowing from a volcanic eruption.

Captured in August 2015 and originally part of a Postcards scene appearing in The Lab, the photos were recently reprocessed using the Steam version of Reality Capture in order to test new, faster workflows for Destinations.

I took the photos with my Canon EOS 7D on a tripod, with the EF-S 10-22mm lens. Due to a half-witted operational error, the focal length slowly drifted from 10mm to around 14mm - I only noticed this after the photos were taken. (Always tape the zoom ring in place!) While I shot bracketed triplets for HDR, I ended up only using the middle exposures for this version of the scene. A couple of extra, non-tripod shots (taken by my father with a different camera) were added in order to fill in some gaps. Also, two of the rubber feet from the tripod got lost amongst the rocks. I learned so much from capturing this scene. It was almost, but not quite, a complete disaster!

This version of the scene is almost entirely straight from Reality Capture with only very basic cleanup (hole-filling and trimming) done in Modo. A small section (lowpoly parts of the dark tunnel walls beyond the snow pile) are borrowed from the earlier, PhotoScan version of the scene - this was more to save time than anything else. Photoshop work on the textures was limited to colour correction only - coverage of photos wasn't fantastic, so there are still gaps and areas of poorly reconstructed geometry.

As initially exported from Reality Capture, the scene suffered badly from many sparkly lines and points in dark crevices - with the textures being extremely contrasty, lighter UV islands could bleed into darker ones at lower mip-map levels . This was mitigated by increasing the texture padding size (referred to as 'gutter') between UV islands before generating textures, and in trimming off the darker ends of the tunnel and generating UVs for them separately. The scene ended up with 11 8k-square textures for the central section, with an eight pixel gutter, and two 8k-square textures for the ends, also with an eight pixel gutter. The mesh is just under two million triangles.

13 x 8K textures? The engine can take some. Not bad