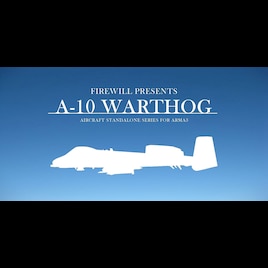 Firewill
Offline
See all 6420 collections (some may be hidden)

This item has been added to your Subscriptions. Some games will require you to relaunch them before the item will be downloaded.
Description
ADDON : A-10 Warthog Series

The Fairchild Republic A-10 Thunderbolt II is a single seat, twin turbofan engine, straight wing jet aircraft developed by Fairchild-Republic for the United States Air Force (USAF). Commonly referred to by its nicknames "Warthog" or "Hog", its official name comes from the Republic P-47 Thunderbolt, a World War II fighter that was effective at attacking ground targets. The A-10 was designed for close-in support of ground troops, close air support (CAS), providing quick-action support for troops against helicopters, vehicles, and ground troops. It entered service in 1976 and is the only production-built aircraft that has served in the USAF that was designed solely for CAS. Its secondary mission is to provide forward air controller – airborne (FAC-A) support, by directing other aircraft in attacks on ground targets. Aircraft used primarily in this role are designated OA-10.

The A-10A single-seat variant was the only version produced, though one pre-production airframe was modified into the YA-10B twin-seat prototype to test an all-weather night capable version. In 2005, a program was started to upgrade remaining A-10A aircraft to the A-10C configuration with modern avionics for use of precision weaponry. The U.S. Air Force had stated the F-35 would replace the A-10 as it entered service, but this remains highly contentious within the Air Force and in political circles. With a variety of upgrades and wing replacements, the A-10's service life may be extended to 2040.

this version is Beta, keep in mind when you playing with it.

input the "Missile Carrier For Rearming" in map. it is can found Empty->FIR objects category.
if A-10 is near missile carrier and zero speed, Open Dialog action is will be activated.
press the action and configure your aircraft whatever you want.
Loadout menu is provide of select the loadout, change the skin, refuel and rearm. also loadout preset is supported.

ECM System is Jamming for Enemy Radar-Based Missile. your Aircraft is must equip the ECM Pod. you have ECM pod, you can see "ECM JAMMER ON", press it, ECM is will be running. ECM have 60 seconds of Operation Time, 40 Seconds of Recharge. so use for wisely. Also, ECM Jammer can't Jamming of IR Homing Missile, like Sidewinder.

**Replace the Pilot**
want to replace the pilot from FIR Pilot Crew Pack, just check the replace pilot attribute in A-10

John Spartan & saul - allow for use afterburner , Ejection Script.
(Specially, John Spartan was help for my SEAD System. Thank you!)

Mr.R - he is my real friend, he provide of afterburner sound, AIM-9 Lock Tone Sound and BRRRT Sound for A-10.

your support is can be make keep working more!
Patreon[www.patreon.com]
Paypal[www.paypal.com]
Popular Discussions View All (4)

SlaveryCrusader666 Jun 21 @ 6:09am
Could you make the TGP screen in the cockpit black and white? Full colour TGP screen is very unrealistic, other than that - very good mod.

TierOneZerO Jun 7 @ 10:54pm
why i cant spawn it with AI? i cant use it on simplex support services. it worked last time but after i unload and load all the mod its gone

Burberry_Jon Mar 3 @ 12:09pm
So I love this mod but I cannot hear the famous BBRRRTTTTTTT

salemeister Mar 3 @ 4:15am
Been in the actual cockpit of the A-10C once so far, and I like this model. Thought it was cool when I selected the gun that the toggle for it flipped, I just checked the real one a couple days ago.

juangrnde Feb 20 @ 12:05pm
Is there a way for zeus to toggle mastersafe while controlling the vehicle?

de_ozzy Feb 10 @ 10:54pm
A-146 CAS its way better if you are searching just having fun and actually assisting with it. The camera system its very hard to use. The tiniest thing that you can see with the camera gets instantly destroyed by the velocity of the plane. IDK if its a replica from the real one, but from the POV of a player that uses the A-146, this plane its, too fast, the camera does not support you, and if you finally get to track an objective the usage of the bombs or missiles its just to hard to use.

3BEIN Jan 19 @ 10:02am
Isn't the GAU-8 reticle supposed to be auto adjust? And from YT vids, i thought this was the version with the correct HUD with ex. "ccip invalid" and altitude warning?