Store Page
Tabletop Simulator>  Workshop > Arbie's Workshop
This item has been removed from the community because it violates Steam Community & Content Guidelines. It is only visible to you. If you believe your item has been removed by mistake, please contact Steam Support.
This item is incompatible with Tabletop Simulator. Please see the instructions page for reasons why this item might not work within Tabletop Simulator.
Current visibility: Hidden
This item will only be visible to you, admins, and anyone marked as a creator.
Current visibility: Friends-only
This item will only be visible in searches to you, your friends, and admins. 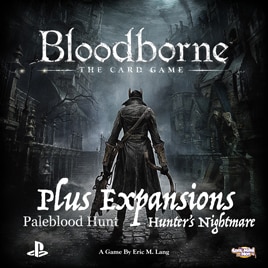 This item has been added to your Subscriptions. Some games will require you to relaunch them before the item will be downloaded.
In 1 collection by Arbie
Bloodborne: The Card Game and Unofficial Expansions

3 items
Description
Set-up for Bloodborne: The Card Game with two expansions we've created. Feel free to mix and match cards with the item bags found near the boxes.

Bloodborne: The Card Game designed by Eric M. Lang and based on Sony Entertainment and FromSoftware's hit video game Bloodborne for the PlayStation 4.[www.playstation.com] In it, several Hunters will enter the Chalice Dungeon, but only one will be able to escape the victor. Round after round you'll face off against brutal creatures bent on destroying you. It will require cunning decisions and careful timing to avoid death. Along the way you'll find powerful weapons and equipment that will aid in your quest. As you dispatch the monsters in battle, you'll earn rewards of Blood Echoes and Trophies. Bank your rewards and heal by resting in the Hunter's Dream or you could risk losing points and even death. Bloodborne: The Card Game is a challenging, tactical game. You'll need to be able to read your opponents and make split second decisions if you want to earn the most glory in combat. Only the brave will have a chance to escape!

About the Unofficial Expansions
After discovering Bloodborne: The Card Game we were impressed by how entertaining and quick it was, but were left a little disappointed by the lack of player interaction and the missing content from the original videogame.

We decided to work on two bootleg expansions that sought to filter out the duplicated Upgrade Cards while adding content from the base game with the first expansion and adding content from The Old Hunters with the second expansion. These are called Paleblood Hunt and Hunter's Nightmare. We hope you enjoy how they transform the original card game.

We do not claim any rights to Bloodborne: The Card Game or any assets taken from Bloodborne or CMON games.
< >
36 Comments

Tukku (worse) Apr 15, 2019 @ 6:51am
Hey, I would like to use your expansion with the core + official hunter nightmare expansion, I see you suggest removing the repeated cards from the deck, however you leave 1 copy of each, the problem im having is that you have on your own deck repeated cards with those of the main game as well (such as Evelyn and Rosmarinus) but they have different effects than the official cards, so I end up having lots of cards with the same name and different effects? is this intended? I dont think that naming cards the same but giving them different effects is good for building up memory.

This works, but it'd be better to upload it to the Steam Cloud: https://cf.geekdo-images.com/original/img/o36CQWD9ecO_MDdCLl5TG53zXZk=/0x0/pic2945396.jpg

Arbie  [author] Jul 16, 2017 @ 6:45am
I'm not willing to share them until I see what's in the planned official expansion, then I'll make changes accordingly.

When I adjust the cards and incorporate the official expansion I will release it all on boardgamegeeks.