Store Page
Starbound >  Workshop > Azure Fang's Workshop
This item has been removed from the community because it violates Steam Community & Content Guidelines. It is only visible to you. If you believe your item has been removed by mistake, please contact Steam Support.
This item is incompatible with Starbound. Please see the instructions page for reasons why this item might not work within Starbound.
Current visibility: Hidden
This item will only be visible to you, admins, and anyone marked as a creator.
Current visibility: Friends-only
This item will only be visible in searches to you, your friends, and admins. 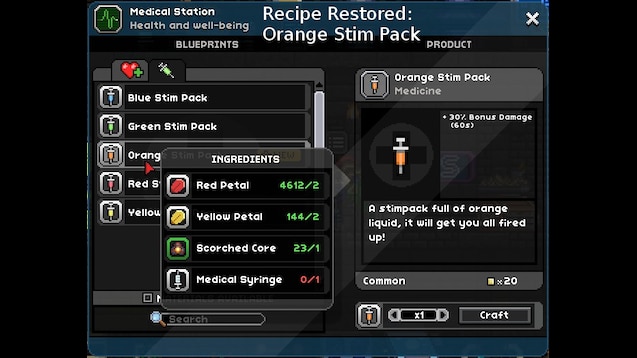 This item has been added to your Subscriptions. Some games will require you to relaunch them before the item will be downloaded.
In 3 collections by Azure Fang
Azure Fang Server Modpack

56 items
Description
A simple mod, all this does is restore the recipe to the rage-inducing Orange Stim Pack. No alterations have been made to the recipe itself, and it is unlocked by default as originally in assets.

This will be of particular use to users of the Job Offers mod, as said mod requires the Orange Stim Pack for the Chemist (Orange) contract.

Pairs well with LazerRay's Repaired Rage Stim mod, which fixes hand position of the item and reintroduces it to merchants and drop tables.

Gormathius Nightstrider Aug 3, 2019 @ 1:24am
Many thank yous for this. I can't craft damage III augments with the Craftable Augments mod without it.

LazerRay Feb 17, 2017 @ 12:53pm
If you are interested, I made a couple of patch files that puts the orange stim pack back in the loot tables and fixes bugs in the item file itself.

Azure Fang  [author] Sep 29, 2016 @ 7:45am
@Augusonic
I will not change the recipe. This is the recipe that already exists in the vanilla game files.

d....drugs are bad m'kay?
besides i play as a glitch i can imagine the needle would realistically just snap off the glitch would have to end up making a usb stim. :P
< >