Store Page
Train Simulator>  Workshop > GreatNortherner's Workshop
This item has been removed from the community because it violates Steam Community & Content Guidelines. It is only visible to you. If you believe your item has been removed by mistake, please contact Steam Support.
This item is incompatible with Train Simulator. Please see the instructions page for reasons why this item might not work within Train Simulator.
Current visibility: Hidden
This item will only be visible to you, admins, and anyone marked as a creator.
Current visibility: Friends-only
This item will only be visible in searches to you, your friends, and admins. 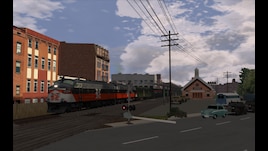 GreatNortherner
Offline
See all 11 collections created by GreatNortherner and other people (some may be hidden)
You need DLC to use this item.

This item has been added to your Subscriptions. Some games will require you to relaunch them before the item will be downloaded.
In 1 collection by GreatNortherner
New Haven Springfield Line Scenarios

This is the second of two parts of a scenario that put you in charge of this train. This part will start in Hartford, just where part 1 ended, and then take you all the way to the south end of the route in New Haven. You will stop be stopping in Berlin, Meriden, and Wallingford. I recommend that you play part 1 first, but the scenarios are not chained so it is entirely up to you.

The EMD FL-9 DLC and the Springfield Line DLC are required to play this scenario.

Recommendation: if you are looking for more challenging gameplay and modified sounds on the FL-9, please have a look at this sound & physics mod for the FL-9:
http://railworksamerica.com/forum/viewtopic.php?f=30&t=13315
(requires the FL-9, P32 AC-DM and Pacific Surfliner DLCs)
< >
17 Comments

billsarge1 Sep 10, 2016 @ 3:40pm
Can someone make one with the P42 Veterans http://railworksamerica.com/index.php/download-library/engine-repaints?view=document&id=1314:ge-p42dc-genesis-veterans-2013&catid=18:engine-repaints on the miami to west palm beach route

GreatNortherner  [author] Sep 9, 2016 @ 11:40am
Thanks for the kind words. Two more scenarios with the FL-9 have just gone live: The Connecticut Yankee, parts 1 and 2. That's the return run of this train here.

steve Sep 7, 2016 @ 5:53pm
This was an excellent high-speed route. Only by keeping the spedometer needle a few points below absolute track speed is it possible to make the aggressive schedule! This makes decellerating efficiently into low-speed zones a challenge. Major privilege to drive FL-9s in such a realistically modelled environment. Bravo!
< >