Store Page
Starbound>  Workshop > DarkNekku's Workshop
This item has been removed from the community because it violates Steam Community & Content Guidelines. It is only visible to you. If you believe your item has been removed by mistake, please contact Steam Support.
This item is incompatible with Starbound. Please see the instructions page for reasons why this item might not work within Starbound.
Current visibility: Hidden
This item will only be visible to you, admins, and anyone marked as a creator.
Current visibility: Friends-only
This item will only be visible in searches to you, your friends, and admins. 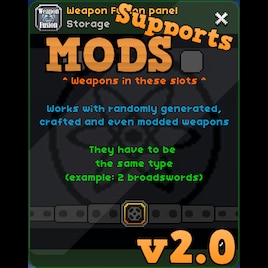 DarkNekku
Online
See all 20957 collections (some may be hidden)

If you said yes to any of those questions then this mod is for you!!

The Weapon Fusion Station lets you combine two weapons of the same type.

You get to pick which look & special you want between the two and you can also rename the combined weapon.

Go get your favourite and faboulous weapons back from the dusty shelf you left them in and put them to good use again!!

Overview (how-to use)
- craft a Weapon Fusion station at an Inventor's table with 1 diamond, or 3 for a smaller variant,
- place the station and interact with it,
- You'll need 2 weapons of the same type in order for the fusion to work,
- Some options will appear for you to choose from,
- Pick which options you want from the weapons, wether you'll want the visual from weapon A, the elemental type from weapon B, etc,
- Click the Infuse button and the merged weapon will spawn on the 3rd slot.

Features
Current:
- Change the look, elemental type, special ability, primary ability or name of all your weapons
- Works on vanilla generated, crafted and unique weapons (melee, ranged, magic).
-[NEW] Works with all modded weapons!
- Works with mods that add new weapon parts, new abilities and new elemental types
- There is 10% Chance for the Infused weapon to be 1 tier stronger than the weapons placed.(the greater the difference between the weapons levels, the lower the chance)

Special thanks to:
- Peelz (author of Create-a-Friend) for permission to use his mod as inspiration;
- everyone in the Starbound Modding IRC that helped me solve my lua code errors/bugs/doubts (Zoomah, specially that root function, saved me tons of work);
- Chuckefish for making StarBound.

Other Useful Info:
- Link for this mod's page at the Starbound forums can be found here[community.playstarbound.com]
- Link to My other mod, with HugoRoxas, Weapon Reinforcer here

changelog
v2.2
- fixed bug with specials not transfering
- proper support for unique special attacks, you can now transfer Empowerment, Scout eye, etc between any weapon of that type
- other bugfixes

v2.1
- fixed aegisalt and adaptable bow crashing
- fixed elementalType being only visual and not applying the status effects (on melee only, rest comes in next update)
- fixed reinforce level (from Weapon reinforcer mod) not being correctly calculated, now it will decrease a bit for each tier difference between weapons if the lower tiered weapon has higher reinforce level
- fixed some uniqueSpecials from messing up fused weapons, namely the Time Pierce, Oculus reaver and Protectors Blade, for now they wont allow their specials to be transfered, but they can get specials from other weapons and then pass those too

v2.0 - MOD Support
- added support for all weapons from all mods,
- change and cleaned code quite a bit, making it easier to support all mods at same time, might have a few bugs, report them with as much detail as you can (which weapons, from which mods)
- fixed bugs that some people reported, like the incorrect level infusion on a few occasions, and some other that happened during updating,
- added proper support for the Weapon Reinforcer mod, depending on the weapon level and reinforce level of the weapons, the final weapon might lose a few reinforce levels.
- changed the station image

v1.0.1
- so focused on fixing violium and adding uniques that i bugged all other xD, all is good now :)
- added version number to bottom right of GUI

v1.0
- added support for all vanilla unique weapons that make sense to be infusable (like Solus Katana, Asoterusaberu DX, etc); those with really unique "mechanics/movesets" aren't and won't be supported (like Gnome Gun, Tentacle Gun, Oculus Reaver, Magnorbs, etc)
- added addition failsafe checks to prevent the mod from crashing the game
- fixed bug with small panel not appearing in the inventors table
- fixed bug with all crafted weapons, most importantly the violium one.
- fixed bug with the rarity selection
- fixed bug with the level calculation

v0.9.7
- added some more failchecks, it should be pretty much impossible to crash/bug the game using the mod (unless i missed some tiny thing, im human after all :p)
- it is now possible to transfer some specials attacks from unique weapons to generated ones, it is a one way transfer, you will lose your unique weapon in the process so only do this if all you want is the special, if you want the visual then wait a bit longer please.
- changed the User Interface a bit (weapons with more dps on the left. auto hide checkboxes for unique stuff that cant be transfered yet, switched to checkboxes instead of the X button - thanks V6- )
- added a 2x2 station variant, still crafted at the Inventor's but for 3 diamond instead of 1, original station still costs one.(new icon/sprite in the making)

Is This Balanced?
Evelyn

rasberry s-pii skial.com Jan 18 @ 11:38am
IM GONNA FUSE A LAZERCASTER AND A SHOTGUN AND SEE THE CHAOS AS A MILLION LAZERS GO IN EACH AND EVERY DIRECTION

goldbrains Jul 21, 2020 @ 7:01pm
wow i just realized this mod was last updated in 2016 and yet from what i can see while playing it works flawlessly even with newer mods
just shows its well made

eltiolavara9 May 9, 2020 @ 9:12am
can you make it so mixing weapons together doesn't nullify their frackin universe's upgrades or make them unable to be upgraded

bobfs May 7, 2020 @ 10:32pm
I tried to fuse patman big gun with patman gord freem get the glocc to make an insanely powerful rapid fire gun (gord freem's glocc is word, and counts as a pistol, despite being two-handed), it worked, but the stats only carried over from the weapon with the texture, so now I have a gord freem's glocc but pain
< >