Store Page
RimWorld >  Workshop > Willowisp's Workshop
This item has been removed from the community because it violates Steam Community & Content Guidelines. It is only visible to you. If you believe your item has been removed by mistake, please contact Steam Support.
This item is incompatible with RimWorld. Please see the instructions page for reasons why this item might not work within RimWorld.
Current visibility: Hidden
This item will only be visible to you, admins, and anyone marked as a creator.
Current visibility: Friends-only
This item will only be visible in searches to you, your friends, and admins. 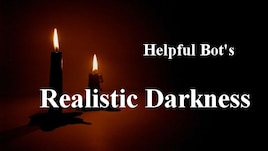 This item has been added to your Subscriptions. Some games will require you to relaunch them before the item will be downloaded.
In 2 collections by Willowisp
Helpful Bot's Rimworld Realistic Darkness Collection

Tired of not being able to tell whether its day or night because they both look similar? Ever wanted lighting to matter? Well then this is for you.

This mod changes lighting and saturation in rimworld to be dynamically darker. Also changes colors and saturation of weather patterns and the eclipse event along the same lines.

Important Disclaimers: (+ Critical)
Includes:
Although it uses no content from Viceroy's Darkness Revamp mod, I would like to give him credit because this mod was created during my work to update his to A14. I made creative decisions that would have changed his mod's mechanics so I instead released this as my own.
Issues list:
COMPATIBILITY NOTES:

FOR NON STEAM DOWNLOAD GO TO LUDEON FORUMS AT
XXXWIPXXX

Never done patreon before but...
https://www.patreon.com/wylowisp

Timou Jan 14 @ 6:17pm
Realistic Darkness (This mod was an unofficial update of Realistic Darkness V4.95 B18 mod, but now has the same name and levels of darkness only).
https://steamcommunity.com/sharedfiles/filedetails/?id=1531882210&searchtext=%5BWD%5D+Realistic+Darkness

Layfon Weller Nov 25, 2022 @ 5:47am
This comment is awaiting analysis by our automated content check system. It will be temporarily hidden until we verify that it does not contain harmful content (e.g. links to websites that attempt to steal information).