Store Page
Starbound>  Workshop > Kave Johnson's Workshop
This item has been removed from the community because it violates Steam Community & Content Guidelines. It is only visible to you. If you believe your item has been removed by mistake, please contact Steam Support.
This item is incompatible with Starbound. Please see the instructions page for reasons why this item might not work within Starbound.
Current visibility: Hidden
This item will only be visible to you, admins, and anyone marked as a creator.
Current visibility: Friends-only
This item will only be visible in searches to you, your friends, and admins. 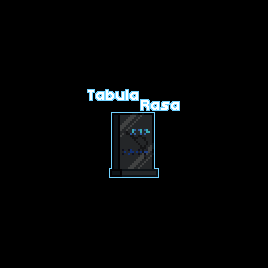 This item has been added to your Subscriptions. Some games will require you to relaunch them before the item will be downloaded.
In 1 collection by Kave Johnson
Mods by Mackinz

- The Source of Much Knowledge​

The Tabula Rasa is designed to be a unified crafting bench for mod content.​

Modders can tag their recipes with "mod" to add it to the tablet, allowing players to access the additional content without player.config patches. Modders can now also organize their content using additional tags and filter buttons in the crafting menu.

Note that the Tabula Rasa will display any associated recipes regardless of whether the blueprint is known, so it is a poor choice for progression-driven content where the modder wants recipes to 'unlock' as the player progresses. You can, however, design your recipes so that the ability to craft is limited to certain tiers. This mod instead focuses primarily on helping others share their creations.

Conversely, this dependence on other mods makes the Tabula Rasa almost useless without companion mods. It still looks great, though, so even if you cannot find a compatible mod, you can install it anyway.

As the original mod( http://community.playstarbound.com/resources/the-tabula-rasa.114/ ) has not been updated since February of 2014, and was released under an update-friendly Creative Commons license ( http://creativecommons.org/licenses/by/3.0/us/ ), I decided to have a go at updating it. With help from Wellbott, it has been updated for Cheerful Giraffe and re-released under the same license. Beyond credit for updating it, all credit for the mod belongs to the original authors - SnoopJeDi and LowestFormOfWit.

The Tabula Rasa was a universal mod back during the Koalas. Now it can be one for Cheerful Giraffe and beyond.

Thanks to SnoopJeDi and LowestFormOfWit for creating the original Tabula Rasa mod. If LFOW decides to do so, he can take over this mod again without hassle.
Thanks to Peasly Wellbott for being so damn good with lua.
Thanks to SuperMandrew for helping with the update to Cheerful Giraffe
Thanks to Chucklefish for making Starbound.
Thanks to You for playing Starbound!

This work is licensed under the Creative Commons Attribution 3.0 United States License. To view a copy of this license, visit http://creativecommons.org/licenses/by/3.0/us/ or send a letter to Creative Commons, 444 Castro Street, Suite 900, Mountain View, California, 94041, USA.

bk3000 Jun 7 @ 4:08pm
@A nondescript pumpkin
It doesn't really need to be updated so bad, except for 2 images that moved locations in the base game. For my mods that support this, I just added those images to effectively fix the tiny issues of this mod.

But I'd bet a lot of newer mods don't support this merely because they might not know it exists. Adding support is pretty easy though.


hasnt been updated since 2016
lol

nouima May 8 @ 9:20am
this is great i can craft things frackin universe prevented me from crafting thanks!

Raylo Feb 4 @ 10:09am
idk why, but pressing the Z key turns off the the UI...
even though the Z key is supposed to be bound to the "clear hands" action.

OmegaPaladin Aug 14, 2020 @ 5:02am
Since people asked about this multiple times, I created a collection of mods that use The Tabula Rasa. Yes, one of them is a mod I created.

As always, remember to use "C" / basic crafting to make your Tabula Rasa.

The biggest issue from being "dated" is that it expects a couple small images (like the close button) at one location but they've moved in vanilla. So you wouldn't have a visible close button (<Esc> works just fine of course).

On account of that - for my mods that support this - I just added those couple images where it expects them and that eliminates the tiny issues. I just did it because it was such an easy fix.

bk3000 May 11, 2020 @ 12:03pm
@Captain__Crazeh
I don't know what percentage of mod authors have added Tabula Rasa compatibility, but mine do including having their own mod filters. I suppose many people who where not modding in the earlier (beta and early release) days may not know of this mod. So I guess it may be better supported by mods made by modders who have been around Starbound longer.

By merely adding "mod" into the "groups" of their .recipes files, it will show up here. So that's very easy. Even making your own filter button isn't hard, although that is optional. Your own filter group is an alternative to making your own crafting station with the advantage no not needing to learn recipes etc.

@The Solar Cobalt
1. From the user's perspective, it is like a crafting table for many modded items.
3. Fine? Sure. Implemented? Either no or only partially so. Depends on the .recipe files