Store Page
Starbound>  Workshop > Ulithium_Dragon's Workshop
This item has been removed from the community because it violates Steam Community & Content Guidelines. It is only visible to you. If you believe your item has been removed by mistake, please contact Steam Support.
This item is incompatible with Starbound. Please see the instructions page for reasons why this item might not work within Starbound.
Current visibility: Hidden
This item will only be visible to you, admins, and anyone marked as a creator.
Current visibility: Friends-only
This item will only be visible in searches to you, your friends, and admins. 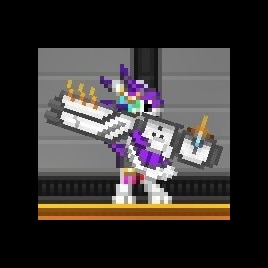 Ulithium_Dragon
Online
See all 16241 collections (some may be hidden)

This item has been added to your Subscriptions. Some games will require you to relaunch them before the item will be downloaded.
Description
*This is a reupload to the Steam Workshop - the original source of my mod can be found here:
http://community.playstarbound.com/resources/avali-rocket-launcher-misc-stuff.3633

[NOTE]: This mod *requires* the up-to-date version Avali Race mod (the game will CTD without it), found here:
http://steamcommunity.com/sharedfiles/filedetails/?id=729558042

Adds an Avali-themed Rocket Launcher to the game (as well as a few miscellaneous extras):
- Custom Sprites
- Custom Projectiles
- Only one tier for the moment (end-game level)
- Custom special effect (Shrapnel Missile - explodes into a shower of white-hot aerogel shards).

*This is essentially a grappling hook with no line functionally - I just thought it was fun to play around with the Ice Axe (*which has now been removed from the vanilla game), and wanted to make an Avali-themed version.

Added a new cosmetic head armor piece called the Datafeed Headset, based off of the tier 1 human head armor Scouter's Visor, crafted at the Avali Nanoloom.

-------------
Avali Lore:
-------------
In the strictest sense, this is not technically canon. The Avali never used Rocket Launchers.
However, unlike with my Avali Tech Bow mod, I'm not going to attempt a weak rationalization. Suffice it to say that I think it's perfectly reasonable to assume the Avali could see the merit and utility in a modern weapon like a Rocket Launcher and create their own adaptations based on other races' versions...

If this doesn't suit you, then no one is forcing you to download it. I made this because I like using Rocket Launchers in Starbound, and also because it was the only weapon type lacking an Avali version.

*These recipes are subject to possible changes in the future!

------
FAQ:
------
Q: Will you be adding more types of Rocket Launchers or Projectiles?
A: I will possibly add some different projectile effect versions at some point, but I have no plans to make more Rocket Launcher sprites.
*I already have a set of various elemental rocket projectiles sprites made for if I decide to do this.

Q: If you add more tiers, will you also add subtle visual changes between the tiers for the Rocket Launcher, like the default Avali weapons?
A: Nah. Only the melee weapons for the Avali do this - all the guns do not..

Q: The Rocket Launcher and/or Spear are a bit unbalanced, will you fix this?
A: I legitimately tried to balance them this time, and don't have any major plans to alter anything at the moment (unless something game-breaking comes up).

Q: The Rocket Launcher's base DPS is higher than all other level 6 rocket launchers, why isn't it the same?
A: I had two main reasons why I made it slightly higher - the projectiles have no knockback, and their hitboxes are so small (and their speed/acceleration so high) that they are a lot harder to aim than the base game's rockets.
I felt this balanced out well, and have no plans to alter the base DPS further (at least until Chucklefish inevitably does yet another weaponry overhaul of course...).

*Unless someone can tell me definitively what is wrong and how to fix it, I'm not going to worry about it - this Rocket Launcher fires a lot faster than the vanilla ones do anyways, so it all balances out in my opinion

[08/06/16] (v1.13):
- Fixed the rocket launcher's main attack damage. It's now properly doing the correct amount of electrical damage, as well as 17-ish physical damage for some reason I cannot find out.
- Failed to figure out why the Datafeed Headset doesn't show up in the Nanoloom - code looks perfectly fine to me. Just use the /admin command to make the recipe show up for now (make sure to do /admin again when you're done crafting it).

Ulithium_Dragon  [author] Oct 7, 2020 @ 3:27pm
@Davion I haven't played Starbound in years, but this is the first I've heard about a bug like you're seeing. Given that I do see other people reporting such a mod-breaking bug, I'd be much more inclined to think that you've got some other mod that's conflicting with this one.

Do you have any mods that make changes to the default Avali race module, for instance? I'd check mods like that first.

Davion Oct 7, 2020 @ 12:13pm
game crashes on frag rocket explosion when it tries to call the plasma explosion projectile from the actual Avali mod. Might be related to the _metadata file missing the line
"includes" : ["Avali"],

Jusey1 Jun 26, 2018 @ 11:06am
Just wanna let you know that I have finished the reskinned and made sure it doesn't require the Avali mod for people who don't want it but also made sure that it doesn't conflicts with your mod at all. If you wanna check it out, go ahead. I already updated my mod with the new weapon.

Ulithium_Dragon  [author] Jun 25, 2018 @ 9:53pm
Iirc the game doesn't like it when two different mods have files named the same thing. This applies to everything: items, special effects, weapons, races, etc.

If you were going to try and merge the Avali race mod, you'd need to change the internal name of every single asset to make it not conflict with the original.

Just require the avali race for your mod - it won't break anything, and the only affect it would have on people who don't plan to use the race for their character is that you might bump into an avali village every now and then (but they're quite rare).

Jusey1 Jun 25, 2018 @ 9:08pm
So, I was looking at the files and I don't think I can do it without causing conflict issues. I'm trying to make it so that my mod doesn't require the Avali race at all as well (I just want it to support the race).