Store Page
RimWorld>  Workshop > Ykara's Workshop
This item has been removed from the community because it violates Steam Community & Content Guidelines. It is only visible to you. If you believe your item has been removed by mistake, please contact Steam Support.
This item is incompatible with RimWorld. Please see the instructions page for reasons why this item might not work within RimWorld.
Current visibility: Hidden
This item will only be visible to you, admins, and anyone marked as a creator.
Current visibility: Friends-only
This item will only be visible in searches to you, your friends, and admins. 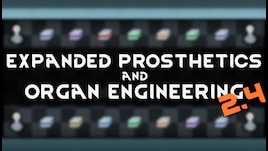 Ykara
Offline
See all 34090 collections (some may be hidden)

There is support for English, German, French, Spanish, Portuguese, Polish, Chinese, Korean and Russian. It will automatically detect the language of your game, you don't have to change anything.

Expanded Prosthetics and Organ Engineering - Creating bionic super soldiers since 2015!
This mod gives you the ability to craft your own prostheses and artificial organs. Starting with basic prostheses like a peg leg or a hook hand, you can research everything you can think about: Simple prostheses like the vanilla ones, countless new, bionic body parts and even advanced bionics. But to get advanced bionics you have to do plenty of research and they're also pretty expensive to craft.
If you tend to lose your organs, this mod helps, too! You can research and craft surrogate and synthetic organs, so you never have to miss your kidney again!
This mod is quite extensive, so there's enough work to do to keep you busy until the endgame!

Q: What is the difference between this EPOE, EPOE Forked and RBSE?
A: Both EPOE Forked and RBSE are based on the original EPOE (this one).
The Forked version is based on EPOE 2.24 and fixed many issues this version had. These problems have since then also been fixed in EPOE.
The differences between this mod and Forked now aren't that huge. Forked keeps the old 4 workbenches and adds some new parts like prosthetic digits, while the original EPOE tries to stay to closer to vanilla, only adding 2 new benches and having the body parts selection feel closer to vanilla.
RBSE derived way earlier from EPOE, so there some more differences. RBSE has two workbenches with its own unique asthetic. It has also changed how body parts are crafted, so that bionics for example do not require their prosthetic counterpart.
But all three of these mods feature roughly the same bionics and organs, all of them are balanced and all mods should be bug free.
So essentially, it comes down to what you prefer. Q: Is this mod compatible with *insert mod here*?
A: Yes, it should be. EPOE tries not to replace, but to add. So it shouldn't cause problems with most other mods.
You should however only use one bionics mod, because using multiple of them will most likely cause issues!


Thank you for playing EPOE!
Popular Discussions View All (191)

can someone please help
Psinax

Rue May 12 @ 6:38pm
Does this mod make it so that you can harvest any body part whatsoever? I have been using Harvest Everything as I have been exploring the medical system and found it annoying you couldn't harvest / fix many areas. If anyone has a definite answer it would be appreciated.

Dr Maybe May 10 @ 7:04pm
The cost of bionic eye in the base game is cheaper then in this mod,. Ya you can make better items and some nice items but the cost is way to high for something that can just lost in 1 shot.

PapaSeagull May 8 @ 10:45pm
Does the mod up the requirement for transhumanism? Mine aren't happy with the simple starter modifications, so I'd assume (per the patch notes, which say it was at some point updated to affect transhumanism properly) that the basic ones don't qualify. Not sure if this was answered somewhere else but I couldn't find any posts in the forum about it.

Naiyasfury May 7 @ 9:55pm
Does anyone know if the prostheses traders sell organs as well as prosthetics?

200 May 4 @ 2:06pm
colonist lost right leg
installed wooden peg leg on right leg
successfuly installed peg leg on right fot
left foot nromal
somehow........ it gave me a "leg" as i did it. i have the option to install this on his right leg. i assume this makes him.. normal?
bruh

qux May 3 @ 12:44pm
Hi, is it possible to give us a new translation file that we can fill ?
All translations are incomplete (miss bionic warfare, advanced brain, exosquelet suit.)
I tried to add missing translation in xml file but it didn't workd

Steve May 1 @ 11:32am
@ipwnuftwsuka If you install the Medpod mod you can build a fancy pod thing that heals injuries like that over time, it's very costly resource wise so a good late game item.

ipwnuftwsuka Apr 28 @ 7:20am
Neck scaring... is there any prosthetic or organ that replaces the neck?!

The_Best_Bacca_Z Apr 27 @ 11:25pm
@Jelly Creeper, I imagine it's something like the Spartan Armor from Halo where it requires extensive time to fully put on, and likely medicine incase something goes wrong.

Also, will an AI Chip keep a colonist's consciousness at 100% even during pain, drugs, etc?