Store Page
American Truck Simulator>  Workshop > Dumbfounded Polymath's Workshop
This item has been removed from the community because it violates Steam Community & Content Guidelines. It is only visible to you. If you believe your item has been removed by mistake, please contact Steam Support.
This item is incompatible with American Truck Simulator. Please see the instructions page for reasons why this item might not work within American Truck Simulator.
Current visibility: Hidden
This item will only be visible to you, admins, and anyone marked as a creator.
Current visibility: Friends-only
This item will only be visible in searches to you, your friends, and admins. 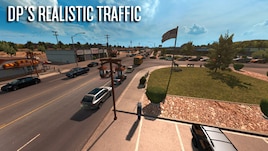 Dumbfounded Polymath
Offline
See all 211 collections (some may be hidden)

This item has been added to your Subscriptions. Some games will require you to relaunch them before the item will be downloaded.
Description
>>> NO LONGER SUPPORTED - PLEASE USE THIS MOD INSTEAD <<<
>>> https://steamcommunity.com/sharedfiles/filedetails/?id=1790026419 <<<

This mod not only increases the density of the traffic but also changes its behaviour to create a busier and more fluid experience.

- Increased traffic in general, which creates a more realistic feel
- Dynamic density based on time of day, expect peak rush hours, quiet nights and everything inbetween
- Traffic has less patience and safety for itself, merging into traffic a lot faster
- Queues that do build up are quicker to filter away
- Police spawning now varies depending on which state you are in
- Supports distant vehicle sound improvements when used alongside Sound Fixes Pack mod

Gryper Feb 7 @ 12:08pm
He didn't even name it the same. When you look for it in the mods folder, there isnt even anything that says "DP's Realistic Traffic".

urbantakedown Nov 3, 2019 @ 8:22am
i see it works with sound fix pack but does it work with jazzycat ai packs?

CatPoint789 Oct 2, 2019 @ 7:46pm
In my experience, this mod spawns too many vehicles. It doesn't cause lag, but if you're on a two lane highway it's impossible to pass cars because there's constantly waves of 3-5 cars in the oncoming lanes.

DEFCON1GAMRS Aug 8, 2019 @ 9:12am
@MageOfAnubis No this mod doesn't work anymore, try reading and clicking the comment that came before you directly from the mod Author for a more updated version of the mod.