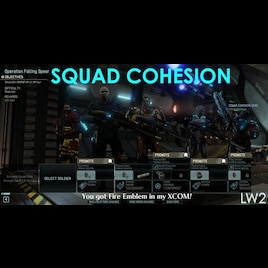 65 items
Description
This mod puts a dash of Fire Emblem into your XCOM, leveraging a "squadmate score" system left in by Firaxis to give small buffs for squads that trust in each other.

Description
NOTE: This should now generally work with LW mods, including LW2. You will need to shift around the UI elements a bit though in the .inis.

The total cohesion score of a squad is calculated from the cohesion each soldier has with each other, and divided by the squad's size. So a four person squad that has max cohesion with each other will have a score of 400.

This means a 2 person squad can hit max cohesion if they know each other really well, while a eight person one may barely be able to hit the low amount even if some of them are at max cohesion with each other.

The values shown only update once you go to add a new soldier to the squad, not when you remove one.

The system works as such with the default values:

These buffs and more can be adjusted at the XComSquadCohesion.ini located in (wherever XCOM 2 is installed)steamapps\workshop\content\268500\660665065\Config


Squadmates earn cohesion between each other by:

These are all governed by XComGameData_XpData.ini that comes with the mod located in (wherever XCOM 2 is installed)steamapps\workshop\content\268500\660665065\Config. These also are all between the two soldiers that do them, no more.

Like the buffs above, these can be adjusted at the XComSquadCohesion.ini located in (wherever XCOM 2 is installed)steamapps\workshop\content\268500\660665065\Config

Penalties
In addition to the above, a soldier dying in a squad with some cohesion will cause everybody who knew that soldier well enough to roll for shaken.

If they didn't know them that well, nothing happens.

Each soldier in a low cohesion relationship with the dead soldier (25) will have a 20% chance of getting Shaken if a soldier ends up dying in the mission.

Each soldier in a med cohesion relationship with the dead soldier (50) will have a 40% chance of getting Shaken if a soldier ends up dying in the mission.

Each soldier in a high cohesion relationship with the dead soldier (75) will have a 70% chance of getting Shaken if a soldier ends up dying in the mission.

You can get a rough overview of soldiers relations to one another via their cohesion ratings in the personnel lists, along with seeing exact scores in the Armory Menu.

The vanilla chance of Shaken being applied to a soldier that got gravely wounded is left untouched.

Cosmetic/Quality-Of-Life Features
Individual relationship scores should be viewable by clicking on the Relationships button when viewing a soldier in the Armory.

There is now a squads organization feature at squad select, you can now save squad compositions you know work well with each other. (This can be disabled in the .ini if used with LW2)


Can't figure out what to name the squad you have? Just leave it blank, and the mod will auto-generate a squad name to go with the given squad composition.

Incompatibilities?
This mod uses UIScreenListeners to do all the major work, however some mods still conflict like:

Game Crashes on Tactical Load - unsub and resub to make sure you have the latest update, I believe I have found the issue to be the game trying to add new cohesion abilities to a team that already has one set, and set in an auto-check to prevent that. If it still crashes please report it.

Please go here to report any issues along that line.

I'm using a 21:9 Screen and I can't find the Relationship button
Change the following in the XComSquadCohesion.ini from
[SquadCohesion.RM_ArmoryMenu_ScreenListener]
POSITION_X=-250
POSITION_Y=70

Credits
Full credit to Falcon and his Uniforms Manager mod, which this mod uses a modified version of its code for the squad management functionality.

Thanks to MantLemon for making the Chinese localization.
Popular Discussions View All (11)

XCOM 2 start-up screen acknowledges the mod, but it's not working in-game.
Illusive

Kad Apr 26 @ 4:15pm
@Haywire Agreed. This is so much better than the bond system in my opinion. Honestly part of the reason I went back to playing vanilla.

Haywire Apr 21 @ 3:23pm
I would imagine it would be too hard to overwrite the bonding mechanic but if possible, I would love to see this for WotC as well. This is how it should have been in the first place. :-)

Thalarian Feb 8 @ 5:32pm
With the release of LWotC, I'd love to see this brought to life for WotC so that it can be utilized there.

Nubsy Jul 2, 2019 @ 7:02pm
I prefer this over the bond mechanic in Wotc, I hope that it gets ported over and replaces Bonds someday.