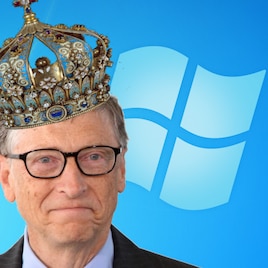 MuchoPotato
Offline
See all 99 collections (some may be hidden)

This item has been added to your Subscriptions. Some games will require you to relaunch them before the item will be downloaded.
Description
Many years ago, the fathers of the Microsoftian Civilization had layed the foundations for a new kind of land. Their names were Bill Gates and Paul Allen. All they wanted is to create a nation in which 6 year olds could get trolled on their gaming boxes in peace. The civilization now has great potential to be an empire with their influencial culture of releasing flawed products.

No, I don't hate Microsoft. This is just a harmless joke. Please don't attack me, fanboys.

THIS MOD PROBABLY DOESN'T REQUIRE ANY DLC. If it does, then make sure that you at least have Brave New World OR Gods and Kings (having both is fine as well).

WHAT THIS MOD ADDS:
- The Civilization of Microsoft
- Bill Gates as a Leader
- The 'Flight Simulator' (special Microsoft unit that replaces the bomber)
- The 'Dankman' (special Microsoft unit that replaces the musketman)
- Microsoft's Unique ability: land units have +1 sight. Great Scientists and Generals are generated 50% faster (so that Microsoft can invade other companies and recreate their products with their scientists faster I guess...)
- Some of Microsoft's buildings are renamed (example: Wall becomes Windows Vista Defender). There is at least one renamed building per era (usually with a fun description).

The Microsoft Civilization is clearly modelled after America but there are differences such as the special units being made to go faster (unlike America's B-17 which only has 2 moves per turn).

The mod may require DLC because some of Microsoft's changed buildings may come from the DLCs.

I hope that people have fun with this mod. Maybe they can take out their anger on Microsoft with it (perhaps they keep on getting the message "Windows is not genuine" even though they just bought the operating system a month ago).

Anyways, I'm MuchoPotato and thanks for downloading!
< >
32 Comments

Iceman42 Mar 26, 2016 @ 5:34pm
The improvements you made were very good additions to the mod. I commend you! Also, thanks for the mention in the update notes haha. I am loving this mod. Cant wait to see what else you can create.

MuchoPotato  [author] Mar 26, 2016 @ 4:40am
I just updated the mod to fix the problems mentioned by Cool Cat. I hope that the mod still works! I'd also like to thank everyone for the suggestions!

Iceman42 Mar 25, 2016 @ 10:39pm
Great mod, but there are 3 things i do not like about it. 1. Dankmans movement: obviously this is a joking mod but 10 movement jsut seems ridiculous. I would be more ok with it at say 5 or so. 2. The Civ has the same colors as America whom in my game i jsut so happened to spawn close to. 3. I feel that the windows beatbox song is a little annoying when it countinues to loop nonstop. Maybe make it so it only plays once or twice then let in game music take over?