Store Page
XCOM 2>  Workshop > Arcky's Workshop
This item has been removed from the community because it violates Steam Community & Content Guidelines. It is only visible to you. If you believe your item has been removed by mistake, please contact Steam Support.
This item is incompatible with XCOM 2. Please see the instructions page for reasons why this item might not work within XCOM 2.
Current visibility: Hidden
This item will only be visible to you, admins, and anyone marked as a creator.
Current visibility: Friends-only
This item will only be visible in searches to you, your friends, and admins. 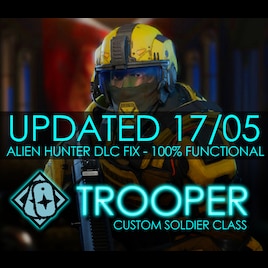 MonstaRrᵈᶜ 👹
Offline
See all 1443 collections (some may be hidden)

This item has been added to your Subscriptions. Some games will require you to relaunch them before the item will be downloaded.
Description
===

Adds a new class to vanilla XCOM2 with CUSTOM ABILITIES, the Trooper!

Troopers are known for their front line effectiveness, possessing a flexible loadout for various combat scenarios.

[Spread Out]
"Nearby allies gain a 20% dodge bonus for the next 2 turns, and a temporary boost to mobility. 4-turn cooldown.

[Death Sentence]
"Fire a reaction shot when spotting enemy movement or attacks within your range. Can fire multiple reaction shots in one turn. -20 penalty to defense while active"

[Survivor]
"Falling in battle heals the Trooper for 5HP and grants a +20 bonus to will and defense. Once per battle."

Aggressive Tactics
"Increases aim by +5, damage by +3, and +15 mobility for one turn. Reduces defense by -30. Costs one action. 4 turn cooldown."

Q. Can you tell me how to make custom abilities/classes?
A. I don't do tutorials, because I simply don't have the time for it. Look at this class tutorial by Isms and refer to the AbilitySet unreal scripts in the dev kit to see how custom skills are built.

Q. The trooper skill tree is broken, I'm missing certain skills.
A. 99% chance that it's to do with other mods installed. You'll need to manually delete other mods to uninstall them. Disabling won't work.


Q. Overwatch All makes my Trooper do Overwatch with their pistol.
I can't fix that. Go to the XComOverwatchAll.ini just change the order to this:

IF YOU HAVE ANY ISSUES WITH THE MOD, PLEASE GIVE ME THE FULL LIST OF MODS YOU ARE USING. IT WILL HELP ME HELP YOU. IF ANY OF THE SKILLS APPEAR MISSING, THEN YOU MAY HAVE A CONFLICTING MOD SOMEWHERE. YOU NEED TO MANUALLY DELETE MODS IN YOUR WORKSHOP FOLDER TO PROPERLY UNINSTALL THEM.
Popular Discussions View All (11)

What's the difference between death sentance and a normal overwatch shot?
Engineer_Gaming
< >
647 Comments

neeeetuo Jan 23, 2021 @ 12:05pm
Add RequiresXPACK=true to the next line of the Description in the first document under all mod files to make mods that do not support wotc work in wotc

The Hippie Dec 28, 2019 @ 4:59pm
Gonna be that guy and ask for a WOTC port despite there already being like, four thousand of said requests lol

romB0 Sep 20, 2019 @ 2:09pm
I know that mod is no longer updated or anything, but maybe someone know solution to my problem with this class. Sadly some of my trooper skills doesn't work. First show from pistol is actually costing me a turn and "Armor Padding" is not giving any bonuses to HP D;