Store Page
Tabletop Simulator>  Workshop > FragaholiC's Workshop
This item has been removed from the community because it violates Steam Community & Content Guidelines. It is only visible to you. If you believe your item has been removed by mistake, please contact Steam Support.
This item is incompatible with Tabletop Simulator. Please see the instructions page for reasons why this item might not work within Tabletop Simulator.
Current visibility: Hidden
This item will only be visible to you, admins, and anyone marked as a creator.
Current visibility: Friends-only
This item will only be visible in searches to you, your friends, and admins. 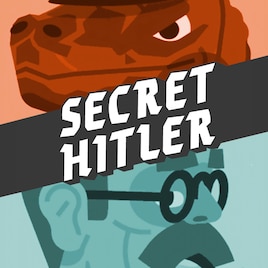 LITHIUM720
Offline
See all 3216 collections (some may be hidden)

This item has been added to your Subscriptions. Some games will require you to relaunch them before the item will be downloaded.
Description
© 2016 Goat, Wolf, & Cabbage ● {LINK REMOVED}CC SA-BY-NC 4.0 ● {LINK REMOVED}SECRETHITLER.COM

Welcome to pre-WWII Germany. In Secret Hitler, players German politicians attempting to hold a fragile Liberal government together and stem the rising tide of fascism. Watch out though - there are secret fascists among you, and someone is Secret Hitler.

At the beginning of the game, each player is secretly assigned to one of three roles: Liberal, Fascist, or Hitler. Hitler plays for the fascist team, and the fascists know who Hitler is, but most of the time Hitler does not know who his fellow fascists are. The Liberals don’t know who anyone is. The liberals win by enacting five liberal policies or killing Hitler. The fascists win by enacting six fascist policies, or if Hitler is elected chancellor late in the game. As Fascist policies are enacted, the government becomes more powerful and the President gains new powers. Even liberal players
may find themselves tempted to enact fascist policies that help them control the table and assassinate their enemies.

Here is a podcast where the original developers of Secret Hitler talk about their thoughts on their game being on Tabletop Simulator, copyright, community involvement and sharing of IP:
{LINK REMOVED}Secret Hitler developer podcast (talk about TTS starts at 26:30)

Dear Max, Mike and Tommy, I do not earn one cent of this mod, I wouldn't even know how (trust me, I'm a Liberal).


Question:
Why are there so many boxes? Do I need them all?

Answer:
Short answer: no.
I included with an update pre-packed boxes labeled with "[5-10] PLAYERS" and filled them with the appropriate secret roles for the player count. 9 and 10 player boxes are included to be future-proof in case TTS allows up to 10 concurrent players. This way the initial setup is faster, you only need to shuffle the box accordingly to the number of players and delete the other boxes.
Generally you can just delete items you do not need an make your own Secret Htiler setup and make a save of it.


Question:
How to secretly acknowledge the Fascist roles in TTS?

As of high demand here are the colored textures which are used in this mod. Those are not organized for printing in any way you have to manage that yourself.

Seems like Jaapbaardaap has taken the effort to organize the colored textures in a
{LINK REMOVED}Colored PNP PDF version.
Also Yottabyte did a {LINK REMOVED}colored PNP version true to the size of the original PNP version.

"Der Andy" made a translation of the {LINK REMOVED}rules into German. So for all Germans struggled with the rules give your thanks to "Der Andy".

Here is a link to a mod backup of Secret Hitler for people of evil and fascist countries who block part of the internet for no good reason:
{LINK REMOVED}Secret Hitler Mod Backup
Download the zip file and unzip it. Copy the contents of the unzipped files according to the directories under <path to TTS cache>/Tabletop Simulator. You might have partially downloaded some models or textures and you might be asked whether to overwrite them or not. Just click "yes for all" in this case. Now you should be able to load the mod completely.

Downloading and restoring with TTS MOD BACKUP tool
First option: Download the self extracting Secret Hitler mod and follow the instructions of the executable.
Please replace {dot} with an actual dot, because steam is filtering links of this file host.
{LINK REMOVED}https://mega{dot}nz/#!A4ETBQoJ!7k2Ye1DhuZN4JxnTRMr29rvx-jCQSs_gCuoEtKx3PJ0

Second option: If you don't trust the self extracting mod download the Secret Hitler backup ttsmod file.
Please replace {dot} with an actual dot, because steam is filtering links of this file host.
{LINK REMOVED}https://mega{dot}nz/#!k01yBRzC!yon2e0p35ewKD9KjXa7PJJ4NJiSbsS9CgDZ9Aa-Kx5g
To install open and restore this backup file you need the {LINK REMOVED}TTS Mod Backup tool.

If you like what you see than give the mod a thumbs up and leave a thank you or improvement ideas.