Store Page
Train Simulator>  Workshop > Zeo's Workshop
This item has been removed from the community because it violates Steam Community & Content Guidelines. It is only visible to you. If you believe your item has been removed by mistake, please contact Steam Support.
This item is incompatible with Train Simulator. Please see the instructions page for reasons why this item might not work within Train Simulator.
Current visibility: Hidden
This item will only be visible to you, admins, and anyone marked as a creator.
Current visibility: Friends-only
This item will only be visible in searches to you, your friends, and admins. 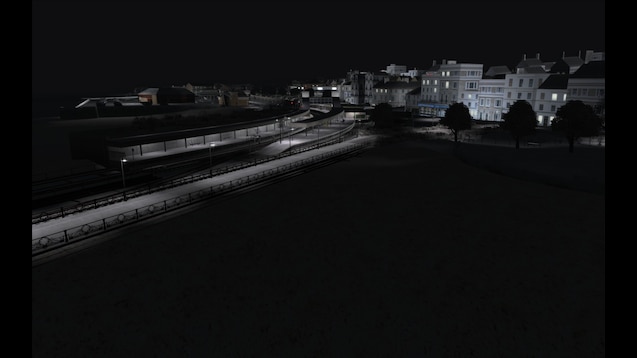 Zeo
Offline
See all 10 collections (some may be hidden)

This item has been added to your Subscriptions. Some games will require you to relaunch them before the item will be downloaded.
Description
Route Data
Location: Isle of Wight, UK
Track Gauge: Standard (1,435mm)
Operator: Island Line
Focus Period: From 2020
Common Rolling Stock: Class 377 EMU Electrostar
Mainline Speeds: 20MPH to 75MPH

The Isle of Wight (IOW) pre-1960's had 56 miles of complex track across the island, linking north to south, east to west with regular passenger and freight trains running all over the island, however with increased popularity of the car, many lines closed as part of the Beeching Axe, including, Shanklin to Ventnor, Brading to Bembridge, Ryde to Cowes via Newport, Newport to Freshwater, Newport to Sandown via Merstone and Merstone to Ventnor West. The only line to survive the Beeching cuts was the Ryde to Shanklin section, later the Isle of Wight Steam Railway (IOWSR) was later formed running on a section of track between Smallbrook Junction and Wooton.

As time went on during the early 90's and the mid 20's, the popularity of the car has continued to increase to the point where this is no room to move, drastic measures had to be done to resolve this issue, a bill was passed in 2019 after the completion of the 'Electric Spine' project and the 'HS2 project was shelved', money from the HS2 Project was reallocated for closed lines to be reopened up and down the country, code name 'Reversing Beeching', while there were some local protests, many people saw the benefits of old routes being reopened, a lot of Compulsory Purchases Orders (CPO) had to be passed.

In this alternative future, the bill included the following lines to be reopened on the IOW, Ryde to Ventnor, Ryde to Cowes via Newport and Cowes to Carisbrook via Newport, all track were reopened as 3rd rail and double tracked throughout apart from the small branch line between Newport and Carisbrook. Ryde and Ashey Tunnels were removed and a new tunnel was made between Wroxall and Ventnor. Southern won the contract for the Island Line and shipped over some of their Class 377 EMU's in their livery. The IOWSR still continues to run, as part of the compensation from the CPO, they now operate on the Brading to Bembridge Line and a much larger siding area with a North and South, main line connection at Brading Station.

Some stations were refurbished to allow the new loading gauges, these include Ryde Esplanade, Ryde St Johns Road, Ashey, Havenstreet, which is now home to the Isle Line Head Quarters and Maintenance Yard and Wooton. Smallbrook Junction was upgraded to Smallbrook Chord with a new housing development and Ashey became a new commercial and housing zone.

I want to say a HUGE thank you to TrainzTop RailSim for making this fantastic custom livery for the Island Line, this works for both Metro and Extension, I've tried and tested it, both inside and out have been redone (minus the driving cabs due to limitations) and it includes all destinations of the Island Line, so you will see Ryde and Newport instead of Brighton and London Victoria, you can download direct from their website:
http://trainsim.trainztop.co.uk/ILClass375Dash7.html

If you know of no source for it, perhaps adding the reskin at AlanThomsonSim would be an idea. You could also put the route up with it so it's not confined to the Workshop, though just posting the reskin should be sufficient. Keeping the route here for scenarios is a good idea.

General Old Billy Bob Jul 20, 2020 @ 1:28pm
As this route hasn't been updated in a while and looks complete, would it be possible for you to make it final so I can make some scenarios for it?

ThatSwindonRailEnthusiast Jul 6, 2018 @ 10:49pm
Will you be making a new IOW route (or extend this one) with the Newport to Freshwater, Newport to Ventnor West and Sandown to Merstone on top of what is included in this? The Ashey Quarry (unless it's closed, I haven't done my research, just looking at a map of the old IOW routes) would also be a nice addition, allowing freight to run, along with Freightliner-style terminals at Cowes and Yarmouth.

LionPlayersAreDegens May 8, 2018 @ 6:42pm
Nice Route, I like it a lot. My issue is that the signals seem to be always on amber and never go green. not sure what causing it but the AWS alarm is annoying

IrvineSteinTheGreatest Aug 12, 2017 @ 5:46am
Any chane of the Isle Of Wright Metro being released.

jezzaland Aug 11, 2017 @ 11:48pm
Amazing route. I'm making timetables for it! Just to clear it up, Brading to Bembridge is the steam railway and everything else is the other lines?
< >