Store Page
Invisible, Inc. >  Workshop > cyberboy2000's Workshop
This item has been removed from the community because it violates Steam Community & Content Guidelines. It is only visible to you. If you believe your item has been removed by mistake, please contact Steam Support.
This item is incompatible with Invisible, Inc.. Please see the instructions page for reasons why this item might not work within Invisible, Inc..
Current visibility: Hidden
This item will only be visible to you, admins, and anyone marked as a creator.
Current visibility: Friends-only
This item will only be visible in searches to you, your friends, and admins. 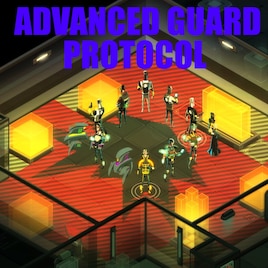 cyberboy2000
Offline
See all 24 collections (some may be hidden)

This item has been added to your Subscriptions. Some games will require you to relaunch them before the item will be downloaded.
Description
Advanced Guard Protocol (formerly known as Challenging Enemies Mod) adds several new guards, both low and high level.

This mod was originally released on the Invisible, Inc. forum August the 23rd as a hard mod but this is the first time it is available on the steam workshop.

It was originally designed to be a very difficult mod but has been rebalanced to more standard difficulty levels.

In addition to that, the mod also adds lots of guard-related generation options, like extended patrol routes, allowing guards to open locked doors, and scaling the number of guards in midway and final missions depending on how long your campaign is. These additions are all optional and can be individually disabled.

And finally, if think the game is too easy we have the solution for you... or special "HARD MODE" where every guard is faster, smarter and deadlier, all for your masochistic needs.
(Using hard mode requires you to have the Sim Constructor installed, which can be found here: http://steamcommunity.com/workshop/filedetails/?id=580661011)

Forum topic on the mod
http://forums.kleientertainment.com/topic/71636-mod-advanced-guard-protocol/

Feel free to discuss the mod on our Discord: https://discordapp.com/invite/aQrXEse
Popular Discussions View All (5)

FrancisNile Jul 11, 2021 @ 4:30pm
thanks for the update. Really cool that you changed the "invisible gun" animation, i noticed that small issue. Do i need to start a new campaign for all the changes to apply?

FrancisNile Jul 10, 2021 @ 4:17pm
no, i started to notice it right after the first missions, my highest level of anarchy was 2 by the time. I remember that th first time i got a med gel from a guard i thought i got very lucky because it was so early in the campaign and in my last games without the mod, getting any item from guards was very very rare, i only started to loot items with some frequency after i got the last level of anarchy in one of my characters, in the late game. But the frequency of items dropping from guards is definitely a bit too high. There was a mission (using the mod) that i had like 4 looted items to sell (1 was from a previous mission that i decided to keep but changed my mind). I get like 2 to 3 looted items per mission with the mod, but in vanilla it's hard to get that amount even with maxed anarchy in late game. Again the mod is incredible and makes the sneaking and fights harder, but i think it makes the economy easier if you can manage to carry all the loot you find in levels

FrancisNile Jul 9, 2021 @ 8:58pm
i don't understand how this mod has not 5 stars. It's incredible, and i found no bugs in like 10 hours using it. Its a must have to any player that want more challanges. I have a question though, i think i am finding items in dead/sleeping enemies with more frequency than before, it's low end trash like the med gel and burster chip I, but still i am making a good amount of money out of it. Does your mod increase the frequency of items in enemy guards? I'm playing in expert difficulty if that can help

cyberboy2000  [author] Dec 25, 2020 @ 1:23am
Please upload your log file. It can be found in Documents/Klei/InvisibleInc/logs. It's more convenient if you click the Discord link above and post logs and questions there.

DrakeWarrior Dec 24, 2020 @ 3:31pm
Hello! I really like the new challenges so far, but the mod makes my game freeze on 5th alarm level most of the time. The new enemy that is supposed to spawn via elevator does not appear, and the game is stuck in the "corps turn" phase infinitely (waiting for the guard/drone to appear, when there is none).
Can it be a conflict with other mod, or has anyone else encountered the same problem?