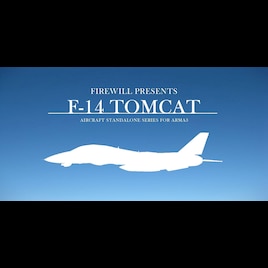 Firewill
Offline
See all 7323 collections (some may be hidden)

This item has been added to your Subscriptions. Some games will require you to relaunch them before the item will be downloaded.
Description
/*YOU MUST NEED FIR AIRWEAPONSYSTEM PACK!*/
Weapon pack Workshop Link

The Grumman F-14 Tomcat is a supersonic, twin-engine, two-seat, variable-sweep wing fighter aircraft. The Tomcat was developed for

the United States Navy's Naval Fighter Experimental (VFX) program following the collapse of the F-111B project. The F-14 was the

first of the American teen-series fighters, which were designed incorporating the experience of air combat against MiG fighters

during the Vietnam War.

defense interceptor and tactical aerial reconnaissance platform. In the 1990s, it added the Low Altitude Navigation and Targeting

The F-14s were used as useful interceptor by Islamic Republic of Iran Air Force during Iran Iraq war against Iraqi warplanes.

Aérospatiale Super Frelon, and two unknown aircraft. While only 12 to 16 Tomcats were shot down, at least half of the losses were

The Tomcat was retired from the U.S. Navy's active fleet on 22 September 2006, having been supplanted by the Boeing F/A-18E and F

Super Hornets. The F-14 remains in service with the Islamic Republic of Iran Air Force, having been exported to Iran in 1976, when

the U.S. had amicable diplomatic relations with Iran.

include with Texture & Config Template.

input the "Missile Carrier For Rearming" in map. it is can found Empty->FIR objects category.
if f-14 is near missile carrier and zero speed, Open Dialog action is will be activated.
or, ammo truck and hangar is also support for Loadout dialog.
press the action and configure your aircraft whatever you want.
Loadout menu is provide of select the loadout, change the skin, refuel and rearm. also preset and custom loadout save/load is

Integrated TGT System" button.
press the button and pick up the target position in map. SEL button is select position, CLR is delete postion, EXT is Exit the

Targeting System.
you want pick up the another position, you must Delete previous target position, use CLR button.

Its Not BUG(or maybe.)
- Vapor Trail on Wings is very normal(even your wings is folded) because vapor trail point is memory point, but mem point is not a

movable.
- In Mission Editor, you can't choose the RIO Seat(Commander Slot) because Pilot is Commander.
but still you can use "moveincommander" for manual get in the RIO Seat in editor. its trick for Weapon Problem with Gunner
- AIM-54 Phoenix is Effective for Long Range. in close range, use Sidewinder or Sparrow. if more Closer range,Use the Vulcan.

Mr.R - he is my real friend, he provide of afterburner sound and AIM-9 Lock Tone Sound.

your support is can be make keep working more!
Patreon[www.patreon.com]
Paypal[www.paypal.com]
Popular Discussions View All (5)

Anyone having issues with the radar not working?
The Mini crit sentry

DRL63535 Aug 31 @ 1:16pm
Well......Who don't like a big cat? But the Tomcat's "Heart disease" is a big trouble. The F-14A Use P&W TF30 Engine.First this engine is use on F-111 Fighter Bomber. TF30 is Working good in F-111.But in F-14A is has a problem. if engine stay in other fighter's wake flow. it may will be shutdown left or right engine very bad situation is.....well, left and right engine all shutdown.That let F-14A pilot learn how to restart problem engine on sky. The U.S Navy is will change soon. But is not enough money and the other project same need money. on the retire install the F110-GE-400 turbine fan only in a fraction on total construction. And last batch F-14 is retire on 2006 22 September

The Mini crit sentry Aug 27 @ 4:12pm
Great mod but some reason the radar isn't working for me at least for some reason. Radar works on other planes though

Now all we need is some Project Wingman goodies like a Monarch skin so we can fly with Prez in ArmA.
< >