Store Page
Cities: Skylines >  Workshop > BloodyPenguin's Workshop
This item has been removed from the community because it violates Steam Community & Content Guidelines. It is only visible to you. If you believe your item has been removed by mistake, please contact Steam Support.
This item is incompatible with Cities: Skylines. Please see the instructions page for reasons why this item might not work within Cities: Skylines.
Current visibility: Hidden
This item will only be visible to you, admins, and anyone marked as a creator.
Current visibility: Friends-only
This item will only be visible in searches to you, your friends, and admins. 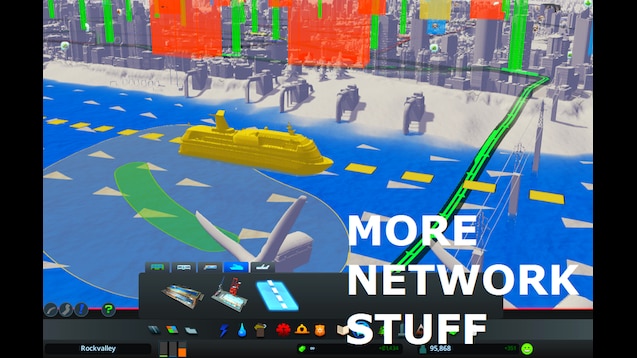 This item has been added to your Subscriptions. Some games will require you to relaunch them before the item will be downloaded.
In 2 collections by BloodyPenguin
Penguin's Transport Realism Project

IMPORTANT NOTES (READ BEFORE COMPLAINING/UNRATING!!!):
- This mod's only goal is to provide buttons for additional network items and it doesn't change any of gameplay logic. If some of placed items behave weirdly, please, let me know. But such issues are out of this mod's scope and you shouldn't complain that this mod 'doesn't work'. - All of assets this mod adds for placement are built-in network assets and I've only added buttons for quick access to them. - Please, don't bulldoze existing train, ship and plane outside connections in-game! I need to update Unlimited Outside Connections mod to properly handle that case (requires serious investigation). - If you place airplane and ship connections in-game I can't guarantee that thay will work as expected. This mod only allows to place them and doesn't change how builidings and vehicle will react to such change (at least, for now). - read this post by reddit user tadoke[imgur.com] if you want to edit ship paths
What this mod DOES:
- Adds buttons & panels to place some network items that weren't supposed to be placed in vanilla game (see list below)
- Makes bulldozer tool able to remove ship and airplane paths in-game (compatible with Moledozer).

What this mod DOESN'T DO (at least for now):
- It won't break your save games (but be careful with placing/bulldozing ship/airplane paths - see notes above)
- It doesn't change how planes, ships, airports etc. will react to building/bulldozing existing paths in-game. If something weird happens, it's not this mod's fault. It's just vanilla behavior of the game.
- It doesn't change how networks placement tool works. If you can't place a ship path for some reason, that's how vanilla game works.
- It doesn't provide road tunnels in MapEditor.

What this mod adds:
- In-Game: Public Transport Panel:Ship path, airplane path
- Map Editor: Roads Panel: Regular roads (small, medium, large), metro tunnels. This mod is not required to play maps created with it.
- Asset Editor (no custom icons, and some of those can't be bulldozed later, also categories may be messed up): all networks that can be part of a building are here :)

This mod is a part of my modular Cross The Line project (includes Cross The Line, Unlimited Outside Connections, my version of NoPillars, and this mod). All mods of that project can be used separately and require each other only in terms of better gameplay experience.

Use Fine Road Heights mod to change Pedestrian Connection elevation in Asset Editor. That might be helpful if somebody attempts to make an overpass like this without hex editing hackery. As I said, I don't create assets myself, so I can't promise anything regarding Asset Editor stuff.

This mod uses awesome detours C# library[github.com] by cope. Without it, this mod would've been impossible to make.

Note: if you have any errors/exceptions, please, don't paste them or output_log.txt into comments. Use pastebin, dropbox or whatever.

[www.patreon.com]
or donate in PayPal (using a card or your paypal balance)

Professor Hardknocks Dec 4 @ 8:18am
I would love to see Monorail, Tram, and Roads in the Asset Editor.

stephane.henault Dec 3 @ 9:20am
I have the same problem with the halls for airport

balcmusic Nov 24 @ 9:16am
Apparently this mod removed my airplane concourses.

Details:
System.IO.FileNotFoundException: Could not load file or assembly 'PrefabHook, Version=1.0.0.0, Culture=neutral, PublicKeyToken=null' or one of its dependencies.
File name: 'PrefabHook, Version=1.0.0.0, Culture=neutral, PublicKeyToken=null'
at LoadingWrapper.OnLoadingExtensionsCreated () [0x00000] in <filename unknown>:0

admiral8q Nov 12 @ 5:59am
Oh I did have to "move" all my harbours and cargo ports for the new ship routes to "kick-in" from each harbour and port to the ship lanes. Basically moved them exactly back to where they were.

(Tweaked it a bit though since I had to move them anyways.)

admiral8q Nov 12 @ 5:55am
I just used this mod yesterday to redo and add to ship routes and fix up and add to air-plane routes.
Didn't have any problems.
Everything is flowing smoother than ever now in that particular city.
-
I think it may or may not have reset "normal" transit routes. But after awhile, those fixed themselves without me having to do anything.