Greenlight > Games > TapDixen's Workshop
Greenlight is being retired. For more information on how to submit games to steam, refer to this blog post.
This item has been removed from the community because it violates Steam Community & Content Guidelines. It is only visible to you. If you believe your item has been removed by mistake, please contact Steam Support.
This item is incompatible with Greenlight. Please see the instructions page for reasons why this item might not work within Greenlight.
Current visibility: Hidden
This item will only be visible to you, admins, and anyone marked as a creator.
Current visibility: Friends-only
This item will only be visible in searches to you, your friends, and admins.
Retro Invasion
Description Discussions4 Announcements1 Comments274 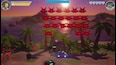 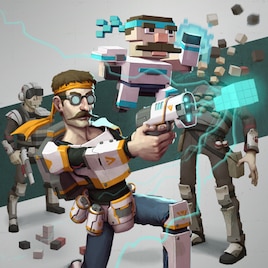 After your amazing support to GREENLIGHT this game we have cool news for you. RETRO INVASION received its first two awards at the DevGAMM Hamburg awards cernomony! THREAKS are super proud of this early honor, and won't let down the trust of the international award jury...and of course you guys ;)

Read More
Description
Release date: End of 2016
“IF GEARS OF WAR AND DOUBLE DRAGON HAD A BABY, THIS IS WHAT IT WOULD LOOK LIKE.”

So what am I voting for?
You’re voting for RETRO INVASION, a 2.5D SHOOT ‘N’ BRAWL action game set in a futuristic environment in which old-school video games turn the modern world into voxels.
Take control of Mike the modern gunner and Rik the retro brawler to fight back the voxelized armies of retro. Experience massive co-op action both local and online and be prepared for the holy mother of retro homages! In this ultimate mash up of modern and retro, slick 3d graphics and AAA audio will clash with voxels and the finest chiptunes!

We at THREAKS started working on the concept of Retro Invasion in 2014, a couple of months after we released our award-winning action adventure Beatbuddy. With your support we will bring Retro invasion to you in 2016!

In detail!
While there are a lot of awesome side scrolling BEAT EM’ UPs out there, we strongly believe that combining a deep co-op system with a unique mash-up of retro and modern audio and visuals will be something that many of you secretly desire.

The mix of retro and modern will be found in the entire game world but especially in our two playable characters Mike and Rik. While Mike resembles a modern day action hero who uses gadgets and an array of different distance weapons, Rik will rely on his voxelized body to dish out tons of melee damage.

Since our protagonists will inherently be flawed by the game era and mechanics they represent, both Mike and Rik will have to work together and complement each other in order to defeat the army of evil and find out who is behind the invasion.
With every co-operative action taken, you will build up combo energy which can be used to unleash crazy combo attacks on your enemies.

We love retro games and RETRO INVASION will be filled with awesome homages to your favorite childhood memories.
We promise to treat these memories with respect.

Be prepared to get your VOXELS kicked!
Popular Discussions View All (4)