Store Page
Arma 3>  Workshop > Whiplash's Workshop
This item has been removed from the community because it violates Steam Community & Content Guidelines. It is only visible to you. If you believe your item has been removed by mistake, please contact Steam Support.
This item is incompatible with Arma 3. Please see the instructions page for reasons why this item might not work within Arma 3.
Current visibility: Hidden
This item will only be visible to you, admins, and anyone marked as a creator.
Current visibility: Friends-only
This item will only be visible in searches to you, your friends, and admins. 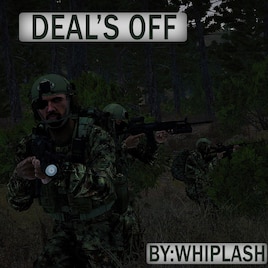 This item has been added to your Subscriptions. Some games will require you to relaunch them before the item will be downloaded.
In 1 collection by Whiplash
Whiplash Infantry Missions

An Arsenal has been added to the mission so any weapons and uniforms mods you have active will show on the mission but they are all OPTIONAL.

Mission will be updated soon with more houses , and maybe a Marksman area

Make ArmA not War Contest :
http://makearmanotwar.com/entry/qC1DG1BAPl#.VB7-mvldVLc
Make sure to show your support by voting.

Situation: Altis is currently under control of the Altis Armed Forces and insurgent Forces , FIA guerrilas are desperatly trying to take back their homes , after weeks of firefights , ambushes and many deaths , FIA higher ranking officer's tried to contact NATO forces so that they could help then , but it turns out it happend the other way around ... According to NATO Intelligence groups , a notorious slovenian gun dealer stole some weapons from a NATO Base and now is trying to sell them to insurgent forces , after months of surveillance it was discovered that this gun dealer was going to sell the weapons somewhere at the Northwest coast...

Mission: Our main objective is to prevent the deal from happening , to do this we must strike them hard , there will be some support from NATO on this mission (details under) , as a secondary objective NATO has requested us to arrest the slovenian gun dealer so that he could be taken to a trial and later imprisoned .

Support: NATO wasn't able to dispatch ground units to us so we are pretty much on our own , still , the've provided us with two important assets , one minigun attack boat , and one UH-60 to extract our team.

Bohemia Interactive For the best game ever