Store Page
Source Filmmaker>  Workshop > Doctor Birdbrain's Workshop
This item has been removed from the community because it violates Steam Community & Content Guidelines. It is only visible to you. If you believe your item has been removed by mistake, please contact Steam Support.
This item is incompatible with Source Filmmaker. Please see the instructions page for reasons why this item might not work within Source Filmmaker.
Current visibility: Hidden
This item will only be visible to you, admins, and anyone marked as a creator.
Current visibility: Friends-only
This item will only be visible in searches to you, your friends, and admins. 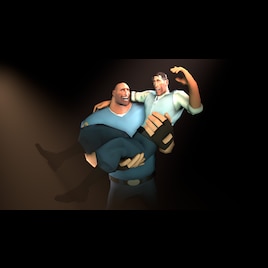 Doctor Birdbrain
Offline
See all 174 collections (some may be hidden)

This item has been added to your Subscriptions. Some games will require you to relaunch them before the item will be downloaded.
Description
EDIT 10/16/15: Reuploading these models (which appear to be loading properly into SFM after I subscribed to my own content for some reason) in the hopes that it will fix the problem with the invisible textures. Let me know if they're still broken.

My custom models of Heavy and Medic from TF2 without their lab coat/flak vest.

NOTE: These are some old compiles using an LOD hack to get the HWM heads onto the custom bodies; I might compile some more legit versions in the future now that Blender can export DMXes.

Relevant text from the original README:


PROPS
====================
Due to the awkward way SFM <s>uses</s> used to use bodygroups, a number of items which were bodygroups on the Garry's Mod versions of these models have been recompiled as props. These can be found in the player/items/medic and player/items/heavy directories and can be added to the models in the same way as any other equippable item; by locking the appropriate bones and dragging their Zero sliders.


Due to how they're set up, some of these props might not spawn in the middle of your screen. You can either select one of their bones and go looking for it with the work camera or lock and drag them onto your character model if you don't see them right away.

Props included in this pack are:

Heavy has two plain skins, two skins with bloodied fists and a spray across his shirt, two skins with a bandage on his forehead using a head skin packaged with SFM, and two Übercharged skins.

ETC
====================
These models have had some extra bones added to their skeletons: Heavy to help make his torso deform more naturally, and Medic for his necktie. These will most likely not interfere if you want to use the default animations for either class, although Medic's tie may need to be reposed to eliminate clipping.

Bright Star Apr 24 @ 5:53pm
To the people wondering how to fix the black parts, Resubscribe to the models, and redownload them. Make sure to uninstall them from sfm first, then resubscribe. It fixed it for me.

Deglazed Doughnuts Aug 2, 2019 @ 9:42am
Uninstall and reinstall the models and they should work just fine, I did that and the black parts on the models have disappeared.