Store Page
Tabletop Simulator >  Workshop > Jonathan Cox's Workshop
This item has been removed from the community because it violates Steam Community & Content Guidelines. It is only visible to you. If you believe your item has been removed by mistake, please contact Steam Support.
This item is incompatible with Tabletop Simulator. Please see the instructions page for reasons why this item might not work within Tabletop Simulator.
Current visibility: Hidden
This item will only be visible to you, admins, and anyone marked as a creator.
Current visibility: Friends-only
This item will only be visible in searches to you, your friends, and admins. 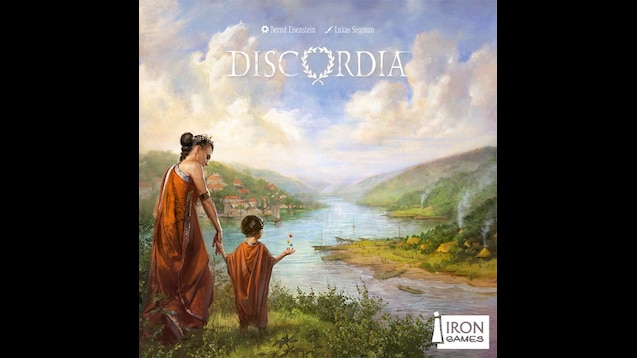 Jonathan Cox
Online
See all 2 collections (some may be hidden)

This item has been added to your Subscriptions. Some games will require you to relaunch them before the item will be downloaded.
Description
This is an officially sanctioned mod that was created by Jonathan Cox. For TTS mod creation inquiries please email JonGetsGames@Gmail.com.

This is a scripted mod that also supports the solo mode.

The first cities on the Rhine emerged from Roman outposts protecting the border with Germania. As the governor of one of these cities, your task is to develop it in the best possible way, while also defending it against the Germanic tribes. Empress Agrippina and her son Nero will inspect your actions and honor the most successful governor.

In 'Discordia', you develop your city by building farms, barracks, defenses, harbors, and markets, and by trading with ships. Use your seamen, soldiers, merchants, and farmers profitably, fulfill decrees, and secure privileges — acting carefully at all times so that your city grows neither too fast nor too slow. Will you have the best-developed city at the end of the fourth year, or will you manage to impress the empress before then and win the game early?
< >
5 Comments

tequila_j Sep 7 @ 9:07am
No problem at all, I though that I was missing how to position the meeples!! Thank you very much for the mod.

Jonathan Cox  [author] Sep 6 @ 10:01pm
Ah, you are correct. I'm not sure how I missed that while building this. Unfortunately that is a pretty big addition from a coding perspective, so it'll likely be a few days before I can get this fixed. Thanks for pointing it out and sorry for missing it!

tequila_j Sep 6 @ 5:33pm
Hi Johathan. At the start of each year (except the 1st), the player who has the most mepples in their reserve should become the first.

Jonathan Cox  [author] Sep 5 @ 12:01pm
It randomly chooses someone to start the game off, from that point on it should follow the first player passing rules as outlined in the rulebook.