Store Page
Turok >  Workshop > DoomMarine23's Workshop
This item has been removed from the community because it violates Steam Community & Content Guidelines. It is only visible to you. If you believe your item has been removed by mistake, please contact Steam Support.
This item is incompatible with Turok. Please see the instructions page for reasons why this item might not work within Turok.
Current visibility: Hidden
This item will only be visible to you, admins, and anyone marked as a creator.
Current visibility: Friends-only
This item will only be visible in searches to you, your friends, and admins. 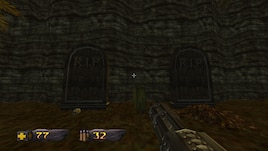 Badger
Offline
See the collection (may be hidden)

This item has been added to your Subscriptions. Some games will require you to relaunch them before the item will be downloaded.
Description
Description:
As Tal'Set begins to rest on this Hallow's Eve from collecting candy for various villages, a darkness begins to drag his spirit down to a twisted realm taking the form of his past battles smattered with festive décor and candy galore.

Can Turok reach the 8 graves of the First Person Saints before its too late? And will his sweet tooth guide him to the bundles of delicious high quality candy corn hidden away?

Experience a remixed version of Turok's first level complete with a total visual overhaul with custom assets for Halloween. Face heavy opposition as you hunt down the 8 graves of heroes of a bygone era to unlock the final boss. Finally, hunt down delicious candies to increase your maximum health!

This Halloween, get ready to ROK.

Turok Sanctum - for mods and a dedicated community[turoksanctum.com]

KNOWN ISSUES:
Enemy AI may require adjustment for combat ranges
Final teleporter is a bit finicky to enter, try entering directly into its center
No collision for graves, skeletons, and pumpkins. May stay this way for sake of gameplay

DoomMarine23  [author] Oct 31, 2021 @ 3:44pm
I'm aware of a few other minor issues such as a few floating props, a missing wall, and some sectors that can be greatly improved.

The mod is still 100% playable, and I am working on producing a bigger update to numerous issues and polish the modification further. This will be released soon but probably not tonight. Thank you.