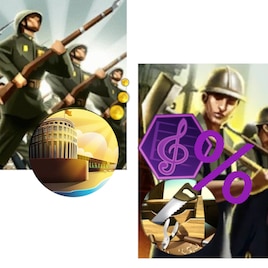 This item has been added to your Subscriptions. Some games will require you to relaunch them before the item will be downloaded.
Description
As you may or may not know, many mods grant "Dummy Policies" to Players in order to track data or apply effects. These are all fine and dandy, broadly going unnoticed by the Player, but they have an unfortunate side effect in that they are counted by Prora's Happiness bonus! This usually isn't a big deal, but the effect obviously becomes more noticable the more Dummy Policies are in use - and when every Player happens to be in possession of around a hundred Dummy Policies, an advantage that might be considered "unfair" is conferred to the Player who is able to build Prora!

Prora:
Requires Autocracy. +1 Gold for every four Population in each City. 1 Free Social Policy. Must be constructed in a Coastal City.

It retains its synergy with Autocracy's main role as the Domination ideology, by providing a counterbalance to Unit Maintenance costs and Unit Purchasing, and arguably benefits Autocracy moreso than before by diversifying the overwhelmingly Happiness-centric effects of the Autocracy tenets. With regards to its strength as a Wonder, I decided that the effect being comparable to Tithe would consequently deem the scaling to be similarly appropriate.

While I was thinking about all this, I of course thought about the other Ideology Wonders as points of comparison: Statue of Liberty is of course one of the best Wonders in the game, but is far from overwhelming and does not need any alterations; Kremlin, on the other hand, stands out as being both weak and boring as a Wonder.

Consequently I considered the patterns followed by these three Wonders: with Statue providing a Production bonus from Specialists, the societal elite who have the leeway to enjoy "freedom" and the tools to influence democracy; and Prora providing what was at this point "some kind" of economic or industrial bonus based in some way on the public it was promised to and to whom the regime behind it promised privilege and prosperity; it followed that Kremlin should provide a unique Yield and in some way depict the societal element its accompanying Ideology held paramount. Thus, I came to this:

Drawing on the iconic phrase "the means of production", I considered the emphasis Marxist ideology places on the catalysts for power, the sites of production which empower whoever controls their output with agency, and had these industrial institutions be the context for Kremlin's effect rather than the City's Citizens themselves. By applying a heavy degree of naivety to the specifics of Marxism, in true Civ design manner, this effect utilises data-driven methods to represent the ubiquity of industry in characteristic Communist society and synergises with Order's best tenet through their shared focus.

One could consider the usefulness of the bonus to be hindered by the low Culture output of the average guild-less City, but besides proposing that one consider this to instead be a motivating factor to build Cultural Buildings and create Great Works to make the most of the effect I would also invoke the comparison to the Sistine Chapel to justify its value: Sistine is easily one of the best wonders in the game, and although it is certainly better than this Kremlin by virtue of its more immediate effect and earlier placement, the way in which the two Wonders' effects are comparable in how they distribute their benefits stands to say that a significant Culture percentage boost across all Cities is most definitely a desirable bonus even when some Cities may struggle to benefit greatly.

Credits:
Me.
Oh well I guess Suk for MCIS