Store Page
Team Fortress 2>  Workshop > C L U N k's Workshop
This item has been removed from the community because it violates Steam Community & Content Guidelines. It is only visible to you. If you believe your item has been removed by mistake, please contact Steam Support.
This item is incompatible with Team Fortress 2. Please see the instructions page for reasons why this item might not work within Team Fortress 2.
Current visibility: Hidden
This item will only be visible to you, admins, and anyone marked as a creator.
Current visibility: Friends-only
This item will only be visible in searches to you, your friends, and admins. 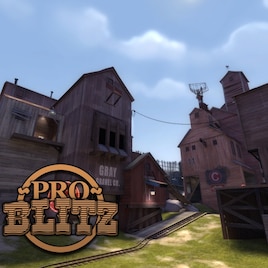 This item has been added to your Subscriptions. Some games will require you to relaunch them before the item will be downloaded.
In 1 collection by C L U N k
Harris0n's TF2 Collection of cool things i created

Thank you Fubar for creating the original Barnblitz Pro
This version of the map is not associated with Fubar and has been made with his permission.

Made most archways nonsolid.
Converted most clipping on stairs to blockbullets.
Lots of chickenwire and gap closing to help with fights and gameplay direction.
Replaced a lot of 'prop spam' with more concise brushwork
Converted the theme to alpine; while aesthetically you may think this is a poor choice, the theme rework helps people who may be visually challenge (such as colourblindness).
Fixed numportal and performance issues (THANK YOU XOBILE YOU BEAST)

New spawn entrance added to help funnel players out of the original spawn room.
Remove the overhangs above cart start.
Removed the pixel walk above the cart start.
Added chicken wire behind the fences around the rocks.
Added chicken wire under the porch outside blue spawn.
Replaced the tirestack with a wall to provide a more clear collision. The tires originally used had a broken collision mesh. I may revert if I can ever get around to fixing that.

Widened the lower entrance to assist with movement.
Removed the ability to climb up to the top spawn from outside.
Fixed being able to resupply from outside the door.

Scrapped the upper spawn and reworked the lower spawn so players can leave either side without having to resupply.
Added a third exit right behind the last control point.
Players will now always spawn on the lower, far left corner until blue has capped 3rd meaning it will be easier to reach 2nd and 3rd to defend.

Moved the first point outside the barn.
Added a new entrance way into the barn.
Moved the shed.
Lowered the porch outside blue forward spawn.
Adjusted a lot of the packs as we felt there were too many full ammo kits.
Moved the large HP kit and medium metals outside of second to be to the side of the point.

Added a new route leading to under the dropdown (this only opens after first is captured).
Put chickenwire in the overhanging platforms.
Removed the hubcaps.
Replaced the box stack with a wall to provide a more clear collision and make climbing up the stack easier.
Removed the shelf in dropdown.
Added a forward spawn for blue that activates once 3rd has been captured.
Fixed the trimming around the little shed near the tracks.
Moved the capture point outside.
Removed all doors in the stairwell leading to third.

Removed Red's 2nd forward spawn.
Replaced the propspam cover on the sniper cliff with a wall to provide a more clear collision and make climbing up the stack easier.
Added a route from the dropdown on second to the platform on third; this should make setting up for second easier for defenders as they don't have to travel as far as well as act as an alternate route to push 3rd on offense.
Moved the ammo from on top of the platform to be next to the health under the 2nd dropdown
Added a vision block under the platform.
Removed a the wall at the top of the barn that divides the two rooms.
Connected the sniper cliff with the stairwell leading in the barn.
Added some health to the sniper cliff.
Added a route from the sniper cliff up the perch overseeing 3rd.
Moved the health and ammo from the top of the barn to just outside the old Red spawn area.
Made the overhang outside the top of the barn solid.
Added an escape route to the top of the hill that leads to lockers.
Removed the fence on the top of the hill.
Added some boxes behind the platform to help navigation around said platform and the hill.
Removed the little healthpacks just outside of the staircase to last and replaced them both with a medium under the dropdown nearby.
Replaced the ladder leading to the big barn with a bridge.
Removed the weird doorway halfway up the wall on the last building that commonly messes with rocketjumps

Reworked Red spawns (see above).
Added a route that leads from the far left corner spawn to under lockers (this route closes after 2nd is captured).
Added a wall that protects defenders leaving the new spawn exit
Widened main and cut away some the excess walls to make entering and leaving less painful.
Replaced the full health and ammo with medium and small ones, respectively.
Moved said ammo to be next to said health.
Widened the the staircase leading to the offensive overlook.
Decluttered the offensive overlook.
Combined the Defensive overlook with the catwalk to make for a better hold area.
Created a new route that leads to above the old full health area.
Reworked all the cover in this new hold area to make it work better as an area for teams to use on last.
Replaced the chickenwire below lockers with wood to make locker pushes less readable.
Added a lip to the lockers perch to prevent cheeky spam into the spawn and visa-versa.
Added visual representation to the lights you can stand on.

If you are interested in watching some gameplay (sadly from a medic pov), you can watch that here

I am currently looking for some international, top level, highlander players to provide both feedback and gameplay (demos/vods/etc).

If you would like to get into contact with me regarding such please add me on steam!

Thanks and Shoutouts:
This has been a massive task and I want to thank so many people for helping along the way

Fubar: for making the original barnblitz pro and allowing me to work on it further.
Raze: for guiding most of the gameplay changes throughout this project.
Xobile: for fixing the numportal and performance issues.
Core: for helping me compile before I upgraded my pc.
Omni: for providing me with a pool of players to help provide feedback.
Brady: for showing me the cap bug present on Fubar's version.
SexyTurtle: for providing some much needed engineer feedback.
Ohai and Kodyn: for giving helpful map changing feedback.
AUHL: for providing me with bountiful playtesters all eager to play and give feedback.
< >
11 Comments

Akul Sep 2 @ 12:38am
Does the respawn room retain its supply cabinet once the first point is capped? I know that in Borneo first red spawn has the cabinet disappear once an appropriate point is capped. Appreciate the reply. It's def clear the map is balanced with comp in mind in particular.

C L U N k  [author] Sep 1 @ 7:15pm
We've deemed this feature as balanced due to the lack of impact this causes during competitive matches. Its also not too dissimilar from upward; while you can sit inside the room the effect you have over the match is minimalx and at best you may get 1 to 2 lucky kills before dying.

Regardless after second is capped you are forced to last so you can't hide in the room forever.

Akul Aug 27 @ 10:27am
You seem to be able to remain in RED's first spawn after the first point has been capped. A few explosive classes there makes it very hard to push by.