Store Page
Griftlands>  Workshop > Newbiespud's Workshop
This item has been removed from the community because it violates Steam Community & Content Guidelines. It is only visible to you. If you believe your item has been removed by mistake, please contact Steam Support.
This item is incompatible with Griftlands. Please see the instructions page for reasons why this item might not work within Griftlands.
Current visibility: Hidden
This item will only be visible to you, admins, and anyone marked as a creator.
Current visibility: Friends-only
This item will only be visible in searches to you, your friends, and admins. 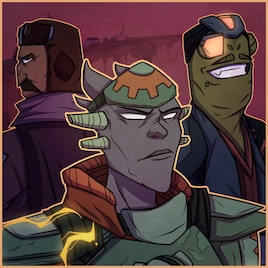 Newbiespud
Online
See the collection (may be hidden)

This item has been added to your Subscriptions. Some games will require you to relaunch them before the item will be downloaded.
Description
New abilities. New arguments. New choices. Fight like a warrior, stay cool under pressure, and Just. Keep. Blasting.

Play as Lieutenant Arint, the second-in-command of the Grout Bog Spark Barons, as she fights to protect the company's interests while handling complications from grifters, spies, less-than-professional underlings, rebels, and an overbearing superior.

FEATURES:
----------
- New playable character: Lieutenant Arint of the Spark Barons
- Over 200 new battle and negotiation cards, including 10 unlockable card packs
- 40+ new grafts to install
- More than a dozen new gameplay mechanics to learn and master
- 3 distinct campaign modes:
- - Behind the Scenes (Half-Length Story): While Rook plays both sides in Grout Bog, Lieutenant Arint stays focused on protecting the Spark Barons' interests.
- - - 16 New Quests
- - - 26 New Events
- - - 2 Branching Endings
- - The Bog Expedition (Story/Brawl Hybrid): When Grout Bog's leaders disappear and danger rises on every side, it's up to Arint to put an end to the crisis.
- - Freelancer Brawl: Survive the increasingly dangerous life of a mercenary as Arint.
- 3 new/remixed bosses
- New Flourishes
- New story illustrations by OneTinyBee and Hummel
- Voiceover narration by Tasch Ritter

NOTES:
----------
This mod is only available in English, but if you want to make a localization mod that translates this content into other languages, you have blanket permission to do so.
Popular Discussions View All (2)

Is the Master of War Flourish bugged?
lazytryhard
< >
25 Comments

Charyzma May 13 @ 2:38am
feels more like a DLC rather than a workshop mod which is fantastic lol

Blight Takes 0 Skill Apr 28 @ 3:33pm
Great mod. As an avid Griftlands player, this was a nice enjoyful experience. Although, have to leave some commentary on the balance of cards after playing a bunch of runs: overcharge is busted, especially with the 2-cost defense card that replenishes defence when an attack is mitigated, you can ramp it up >100% before actually casting it, making you basically invincible. Not much reason to go Chemical build especially considering you need to apply it to many enemies beforehand and you won't live long enough for that with low defence cards. Good Cop negotiation card is just busted with Authority, it wins you everything by itself as long as it's protected, I tried to go dominance/a bit of diplomacy but Good Cop/Authority just beats everything on turns 2-4 out by a large margin, especially when that argument is copied. Fun mod otherwise though, didn't explore half the card packs but I highly loved Arint in this, thank you for making it!

Isisius Apr 14 @ 7:42am
Yeah i never bother commenting on stuff like this, but this mod really feels like it was made by the devs. Great job, and they should totally look at you if they decide to add DLC to the game.

blazeb202 Apr 13 @ 2:43pm
I don't ever leave comments, but this mod deserves it. This is one of the most well done workshop mods I have had the pleasure of playing. Everything is this mod is great, and I agree with the previous poster that this feels like official content. If anything official was added again, they should take pointers from this mod. It's that good!

Stade 7 Apr 10 @ 2:18pm
This mod is entertaining and I concur, well-made to the point of feeling like official additional content... which might never be a thing. And having two adventures on the menu is a nice surprise.

I'm having a great time, my thanks to you and your team for you work, and to LaChouette for the judicious recommandation.