Store Page
RimWorld>  Workshop > StatistNo1's Workshop
This item has been removed from the community because it violates Steam Community & Content Guidelines. It is only visible to you. If you believe your item has been removed by mistake, please contact Steam Support.
This item is incompatible with RimWorld. Please see the instructions page for reasons why this item might not work within RimWorld.
Current visibility: Hidden
This item will only be visible to you, admins, and anyone marked as a creator.
Current visibility: Friends-only
This item will only be visible in searches to you, your friends, and admins. 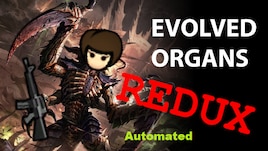 This item has been added to your Subscriptions. Some games will require you to relaunch them before the item will be downloaded.
In 1 collection by StatistNo1
Mods by StatistNo1

7 items
Description
Adds a whole lot of organs, limbs and other body parts for your pawns to reach beyond their limits.

Replace your organs to make the pawn more resilient or faster.
Replace your limbs to do more damage, be faster, tankier or a better shot.
Install a second heart or an additional lung.
Grow your pawns a second pair of arms!
Replace parts of their brain to make them think faster and sleep less.
Replace one of their arms with a mace that weakens their enemies when hit.
Mix your pawns DNA with that of an invisible worm.
Gift them the gift of permament happiness with hormone regulators.

Depending on your other mods you run, you might be able to choose one of their crafting benches or organ growing vats in the settings.

CREDIT pre inheritance:
Xahkarias: Original creator and contributor
Jetharius: Contributor to the previous iteration of the mod
tunajjang: Korean translator
KongMD: Big help with questions
CREDIT post inheritance:
StatistNo1: Added the automation, updated to 1.3 and some other features.
RimWorld Discord: Helping with quite a lot of random questions.

I am currently a bit burned out. There won't be any updates for the next few weeks.
Only bug fixes for now.
The mod won't be abandoned by me anytime soon!
Popular Discussions View All (7)

Nianor Skywolf Nov 21 @ 10:29pm
@KadillacMan it's not too hard to patch on your own if you don't mind some simple XML edits. I did that for my own playthrough.

KadillacMan Nov 21 @ 9:44pm
Hello, I'm using this and quality bionics, any EOR body parts I make always turn out as excellent no matter the skill level. If I turn on debug I find a line stating,

Make_EVOR_Item_Eye_MultispectrumEye needs workSkill because it creates a product with a quality.

I'm just curious if its something that's been brought up. Whether you intend to change anything or not is up to you. Cheers!

Wish Granter Nov 20 @ 9:41am
@StatistNo1 thank you didnt notice the mod setting that lets you swap the production of the organs back to the old "growing thing", which is more immersive and less micro for me as they are organs after all

Egalexandr Nov 18 @ 4:15am
@[SV] Its mb a loading order error, I had one with pawnmorpher, try to place Evolved mod to "very" bottom. I solved this red error but pawns have a duplicated 'tail' bone

[SV] Nov 17 @ 2:53am
hmm, I'm still getting the red error I got for a long time now, something about EVOR_Item_Tail_Blade, I remember you mentioned there will be error because you redo some stuff, and I'm pretty sure this red error come from that time, but it has been a long while and it's still there, any clue how I can make this gone? or if it's still showing up to others too?

Egalexandr Nov 1 @ 4:43am
I tried it with Pawnmorpher, and well... Pawnmorpher body mutations are winning in comparison to some mod features from here like strong avian legs may increase a pawn speed to 200%+ or feline eyes for your sneaky shooters without hard impact on colony wealth. I just dont like the fact that most of mod body parts are have unified prices even not giving so much effect in comparison. Its like playing around risks of getting wrong way mutated or paying high prices to get an exactly targeted result.

James Stone Oct 31 @ 10:15am
Any chance to re-add the Wings? Maybe have them give a Jump Pack effect with a cooldown?