Store Page
Total War: WARHAMMER II>  Workshop > Phallus Darkblade's Workshop
This item has been removed from the community because it violates Steam Community & Content Guidelines. It is only visible to you. If you believe your item has been removed by mistake, please contact Steam Support.
This item is incompatible with Total War: WARHAMMER II. Please see the instructions page for reasons why this item might not work within Total War: WARHAMMER II.
Current visibility: Hidden
This item will only be visible to you, admins, and anyone marked as a creator.
Current visibility: Friends-only
This item will only be visible in searches to you, your friends, and admins. 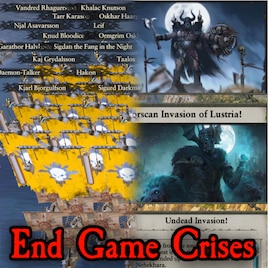 See all 238 collections (some may be hidden)

"The Twin Tailed Comet blazed across the sky, visible to every creature in the world, both living and unliving. Witnessing its passage is a once in a generation event. All who see it interpret its omens differently, but none deny its significance, for the passing of the Dragon With Two Tails always coincides with cataclysmic events.

What new, cruel tests do the gods have in store for the world?

Enter the END GAME CRISES mod! Heavily inspired by Stellaris' multiple end game crises, this mod adds in 4 new end game crises that each have a 50% chance to trigger (can force-enable them via MCT). There is also a failsafe to make sure that you always get at least 1 crisis. I used the vanilla Chaos Invasion as a benchmark to make all of these crises, so it should feel "seamless" with vanilla. Just like with the Chaos Invasion, you will get a 'warning' event around turn 15-25, letting you know which terrible crisis (or crises) you will be getting. These crises ensure that no area of the map is immune to experiencing existential end game danger!

I did my research to make sure that these crises were as lore friendly as possible, so don't worry about your immersion breaking :).

Currently, these are the 4 main crises:


Additionally, there are a few "mid game" events as well:

Difficulty: Each crisis scales based on the difficulty you choose in the MCT, otherwise it defaults to 12-15 stack spawns. (3 = Default, 4 = Hard, 5 = Very Hard, 6 = Legendary) Legendary difficulty spawns up to 30 armies!

When do the crises happen?

Compatibility: it's a script mod so it should be compatible with 99% of mods. You can add it to an existing save, but the events won't fire unless you add it before turn 15. The mod doesn't touch the Chaos script in any way, so mods affecting Chaos will work just fine. Works with Flamboyant's Event Compilation. No idea about SFO (reportedly doesn't work. Need more feedback on this).

CREDITS
This mod would not be possible without the following amazing people:

rips Oct 5 @ 1:17am
Is this mod save game compatible? I.e. if I add it to an existing game that is way above turn 160 will the crises happen? And can I set what difficulty each should be or does it automatically scale up?

bruktrukruk Sep 25 @ 12:18pm
been using it fine alongside all other event and invasion mods, with no issues.

Velykos Aug 16 @ 10:48am
This is an incredible mod
Post some news please soon thanks :D