Store Page
RimWorld>  Workshop > MrKociak's Workshop
This item has been removed from the community because it violates Steam Community & Content Guidelines. It is only visible to you. If you believe your item has been removed by mistake, please contact Steam Support.
This item is incompatible with RimWorld. Please see the instructions page for reasons why this item might not work within RimWorld.
Current visibility: Hidden
This item will only be visible to you, admins, and anyone marked as a creator.
Current visibility: Friends-only
This item will only be visible in searches to you, your friends, and admins. 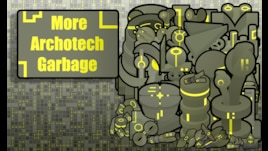 MrKociak
Online
See all 1233 collections (some may be hidden)

This item has been added to your Subscriptions. Some games will require you to relaunch them before the item will be downloaded.
Description
I'm not actively maintaining the 1.2 version, by itself it will 100% work, but if there are any other problems with other mods, I'm not going to fix them.

Features:
-Archotech Fragments - The main resource used to build and/or craft archotech devices. Obtained from: special mechanoid salvaging recipe (at the archotech bench), quests, traders (faction bases seem to offer them pretty often), destroying ancient ship parts, destroying/deconstructing some of the mechanoid cluster buildings (the archotech looking ones, can't miss 'em)
-Archotech Mass - A material that can be used in any stuffable recipe (it's a leather, wool, stone, metal etc, all at the same time). Somewhat strong but the stats are within "vanilla range", it's pretty much the best material for almost anything (at least if you don't use any poweful ones from other mods), but don't expect 10000000% stat boosts.

-Mechanoid summoner - Can be used to summon a mechanoid raid or other mechanoid attacks
-Meteorite Summoner - Triggers the meteorite event with a press of a button, a decent high risk way of quickly getting resources
-Pod Summoner - every 1-3 days summons item drop pods, ~10% of the time it will instead contain a person
-Psychic Manipulator - Can be used to instantly summon a wanderer to your colony or tame a random animal on the map, there's a small risk of a bad thing happening instead.
-Archotech Limb Assembler - periodically makes vanilla archotech body parts
-Resource Assembler - Regularly generates small amounts of basic materials (steel, silver, gold, uranium, jade and plasteel)
-Archotech Nourisher - Generates Archotech food. It also assists with coking a bit.
-Archotech Food - different archotech-tier foods (meat, vegetarian etc.), doesn't spoil or deteriorate, nutritious and tasty (more types added with VE Cooking)
-Archotech Walls - adds 2 types of walls, 1 really tanky one and one with the ability to repair itself every 24 hours (the second one might be a little bit laggy, nothing severe but be careful with those)
-Archotech Floor - Very clean and very sturdy.

Archotech items from these mods will become craftable at the archotech bench or buildable. The patches for that will only activate if the mod that it's for is active.

I'll also add archotech items as small add-ons to other mods (they will still only appear if the mod that the add-on is for is active).

Special thanks to SirLalaPyon for making the textures for the meal and the spice vial (the meal one got kinda replaced for now, but the old one witll definitely get a different use :p).


Future plans:
-Balance changes (if needed)
-Adding more garbage and making patches for any other future mods with archotech stuff (let me know if there are anythat I haven't made a patch for yet)
-no-crafting/lite version of the mod for those that want more archotech stuff but want it to remain a quest/trade only thing


Minor incompatabilities (weird interactions that don't really break anything, but can be an annoyance):
-Semi Random Research - should work fine as long as it's loaded after MAG

Major incompatabilities (things from other mods and/or this one completely stop working)
-Standalone Hot Spring [BAL] - doesn't work in 1.2, but seems to work with no issues in 1.3

Should be safe to use in an already existing save.

MrKociak  [author] Nov 25 @ 1:09pm
@Majestic sea flap flap ok about those recipes, I found the issue and the reason for it was pretty dumb. Basically the patch was unfinished, as in not every item was included. I was meant to finish it the next day, but forgot to test it without SoS2 (basically both mods add those items), so seeing the recipes there and no errors I've assumed it was all done.
I've fixed the patch now, though the "fixed" version isn't out yet, but it will be included in the next update (there's a decent amount of unfinished/placeholder stuff that should probably be finished and cleaned before I press the update button).

MrKociak  [author] Nov 16 @ 10:40am
@啦啦啦德玛西亚
Are there any other errors? Because if not, I'm pretty sure you're on 1.2 and using Standalone Hot Spring [BAL] (which is not compatible with this mod).
If you're not using Standalone Hot Spring [BAL] then let me know what other mods you're using, though I won't really do much if it's on 1.2 as I'm only working on updating the 1.3 version.

MrKociak  [author] Nov 16 @ 10:35am
@Kalrizion it's from rimbees. Though this mod does contain a texture for "archotech beeswax" that isn't really a thing. It will most likely be used in a separate mod/patch.

Kalrizion Nov 15 @ 10:12am
I just realized rimbees has archotech garbage tier stuff, is that from rimbees or from here that added that?

啦啦啦德玛西亚 Nov 15 @ 2:28am
Could not find a type named BetterHealerSerum.Jobs.Driver_ResurrectButBetter

MrKociak  [author] Nov 13 @ 5:13am
Oh yeah there is something I'm working on (the archonexus replica thingy), I can throw in some bonus mass/fragments rewards for each "step".

MrKociak  [author] Nov 13 @ 5:11am
@Medium-Rare Chicken the quest could be a nice option. Though I most likely will play around with quests/incidents in a side mod because I wanna utilize the VE Framework, but I'd like to avoid adding another dependancy after release (I don't wanna deal with that "do you have X enabled?" mess again).

If you want to go even further, maybe archotech infested insects that could be summoned, or found in the world that are extremely powerful.

"Just before an ancient archotech was about to perish, they merged the last fragments of themselves with a nearby insect hive. This hive became highly intelligent and proliferated throughout dozens of rimworlds. They are highly dangerous, aggressive and cunning, whilst still maintaining their cold, emotionless drive to reproduce and survive"
< >